Spaced
"You are so blind! You so do not understand! You weren't there at the beginning! You don't know how good it was, how important!"
I like funny. There are a handful of shows that I have seen dozens of times, know almost every line, and yet still find myself roaring with laugher at. Jeff’s rants in ‘Coupling’ and virtually everything that Malcolm Tucker says in ‘The Thick of It’ are two examples. However, for no other comedy is this more true than the cult classic, ‘Spaced’.

‘Spaced’ was broadcast over two series on Channel Four between 1999 and 2001, running to a total of just fourteen episodes. It tells the tale of two twenty-something underachievers, Tim Bisley and Daisy Steiner, who meet in a cafe and fake being a couple in order to rent a flat in North London. Tim works in a comic book shop, but dreams of being a graphic artist. Daisy wants to be a writer, but uses every distraction as an excuse for not doing any work (a character I can completely identify with). A small band of friends and associates join them in a series of mundane adventures which, through the rose tinted filter of pop culture reference, take on a whole new level of excitement.
It is the pop culture references which drive the show. There are simply too many to name every film and TV show that ‘Spaced’ references or pastiches, but they include ‘Close Encounters of the Third Kind’, ‘One Flew Over the Cuckoo’s Nest’, ‘Fight Club’, ‘Robot Wars’, ‘The Omen’, ‘Scooby Doo’, ‘Rhubarb and Custard’, ‘Terry and June’, ‘An American Werewolf in London’ and ‘Platoon’. In the ninety second opening to the episode ‘Change’, ‘Spaced’ manages to reference ‘Buffy the Vampire Slayer’, ‘Dawn of the Dead’, ‘Back to the Future’, ‘E.T.’, as well as every war film ever. It is a geek’s paradise, a rich vein and a rare example of a TV show that assumes the intelligence of its viewer rather than dumbing down to serve the lowest common denominator. If you don’t get it, well that’s your loss.
What makes ‘Spaced’ unique amongst its contemporary sitcoms is its reliance on more than merely its script and performance. Since the beginning of television, most sitcoms have been recorded in a studio with a two or three camera setup and the comedy comes from the individual performances of the actors. Even modern, verite comedy like ‘The Thick of It’ and ‘The Office’, which use hand held, one camera set ups, are still largely reliant on an interpretation of the script in order to generate the laughs. The script for ‘Spaced’, written by Simon Pegg and Jessica Hynes (Tim and Daisy), is brilliant, as are the performances of all involved. However, the devil is in the detail and what elevates ‘Spaced’ to comedy gold ('Fried Gold', to use Nick Frost's phrase) is as much to do with director Edgar Wright’s use of camera pulls and wipes, which give ‘Spaced’ a style all its own. What other show references ‘Evil Dead’ by having the camera make a series of graded, staccato movements from top right of the set, to top left, to bottom left? Or has such confidence in the strength of the script that it can afford to underpin so much of it with a contemporary soundtrack and trust that it won’t distract or detract from the plot? 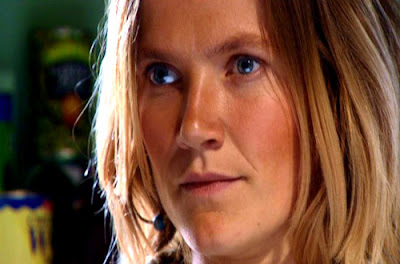 Comedy has an important social role to play in allowing cliques to gravitate towards each other and coalesce. Great comedy is repeatable and quotable, like some form of arcane language. As teenagers, my friends each had scenes from Holy Grail and Life of Brian memorised and would rattle them off at a moment’s notice (“Found this spoon sir.”  “Well done Centurion. We’ll be back for you. Weirdo.”). In ‘An Audience with Billy Connolly’ (a video tape I wore out through repetition), Connolly talks about the parties he used to go to in 70s, where people would sing songs. For us, it was always the comedy routine, from Python to Red Dwarf to the Fast Show, that we would perform for each other. We were not drama students, none of us went on to be actors (although some of us did dabble in Media Studies). We were just bored, working class kids with too little money and too much time to kill and this was how he kept ourselves entertained.
Later, it was through ‘Spaced’ that those same friendships were reinforced and a whole new set formed. As good as shows like ‘The Office’ are, their appeal is so broad that a common love isn’t conducive to long-term, lasting friendships. It’s like saying you like to eat bread: It tells you nothing. A mutual love of ‘Spaced’ doesn’t guarantee mutual understanding, but it’s a better barometer than most. I have friends in the States that I have introduced to ‘Spaced’ by watching it together over Skype. When I came to write the short story, ‘Re:JJ13h’, I used ‘Spaced’ as the catalyst for two of the main characters becoming friends. I could think of no more effective a shorthand for geek friendship.
In terms of sheer quotablity, ‘Spaced’ must have the highest density of quotable lines of any show. Its idiom has become such an integral part of my vocabulary, that I’m barely aware I’m even doing it. “Hello you.” “Skip to the end.” “Oh my God! I've got some fucking Jaffa Cakes in my coat pocket!” Whenever someone returns from an holiday or an event, I feel compelled to ask, “So how was it kitten, was it magic?”


Yet because ‘Spaced’ doesn’t dumb down, the viewer is rewarded for their knowledge. The ‘Star Wars’ references are often so obscure that only a true sci-fi geek would notice them. “How’s it going?” “Same as always.” “That bad, huh?”: “Ok, well take care of yourself Tim, I guess that’s what you’re best at.” Not to mention the entire plot to ‘Change’, where Tim gets sacked for shouting at a child for wanting a Jar Jar Binks doll (and vocalising the general disgust that we all felt at the abysmal prequels). Or the coup of having Peter Serafinowicz, the voice of Darth Maul in ‘The Phantom Menace’, repeat, verbatim, Maul’s lines in the guise of Tim’s nemesis, Duane Benzie. 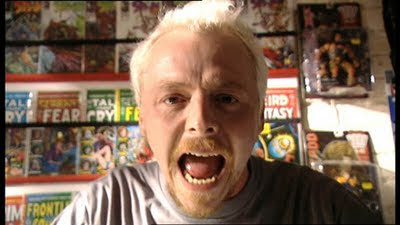 In fact, ‘Spaced’ has an impressive list of cameo appearances from the elite of British comedy. Mark Gatiss and Reece Shearsmith from ‘The League of Gentlemen’, Jo Scanlan, who would go on to play Terry Coverley in ‘The Thick of It’ and co-write the darkly funny, ‘Getting On’. David Walliams of ‘Little Britain’, Paul Kaye, Kevin Eldon, Bill Bailey, even a blink and you’ll miss it appearance by Ricky Gervais. It also launched the career of Nick Frost, who hadn’t acted before, until playing Mike.
However, perhaps the greatest legacy of ‘Spaced’ is its big-screen spin-off, ‘Shaun of the Dead’. Following on from the episode ‘Art’, where Tim takes speed, stays up all night playing ‘Resident Evil 2’, causing him to hallucinate being under attack from zombies, Simon Pegg and Edgar Wright discovered a mutual love of zombie movies. They therefore set out to write and make a parody of the zombie movie genre, with the usual rugged hero replaced by an incompetent slacker (played by Pegg). ‘Shaun of the Dead’ brings with it all of the same subtle references and attention to detail that made ‘Spaced’ such an exceptionally good show. ‘Shaun of the Dead’ was followed up in 2007 by ‘Hot Fuzz’, Pegg and Wright this time satirising the buddy cop genre. A third film, ‘The World’s End’ (working title) is due to be made at some point in the future.
Watching ‘Spaced’ a decade on since it concluded, it has dated surprisingly well. Some of the references, like those to ‘The Matrix’ and ‘Sixth Sense’ are very much of the time that it was made in, but there are enough other references to previous decades that they don’t stand out so much. And while I know every line, there are still bits I roar with laughter at, no matter how many times I see them. Daisy moaning about trying to find a flat in the opening episode, crying that, ‘Every morning I wake up and it's the same. I get up and I buy the paper, and I circle them all, and I phone them only to discover they've been taken by a bunch of fucking psychic house hunters’, makes me laugh every single time. It’s all in Hynes’s delivery. I like funny, but I love ‘Spaced’. A few shows have since come close, but it has yet to be bettered. It’s unique. A one-off.
Now if you’ll excuse me, I have to go and bogle to Aswad. Research. >>Skip to the end. 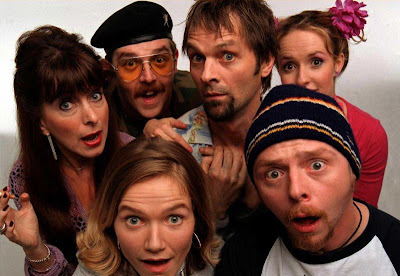 Email ThisBlogThis!Share to TwitterShare to FacebookShare to Pinterest
Labels: Best Things Ever, Comedy, Spaced, The Thick of It