Well, the posts get later and later, but they are getting posted and that's the important thing. Today we look at the thorny issue of who wrote the plays of William Shakespeare. I don't wish to give away the ending, but it turns out that there is no issue at all.

Did William Shakespeare of Stratford-upon-Avon write the plays that are ascribed to him? That, if you’ll pardon the expression, is the question which has encroached upon mainstream debate in recent years.

There was a time when authorship doubts were raised only by a lunatic fringe. They weren’t raised at all until the middle of the nineteenth century. The twenty first century has seen an petition entitled, ‘Declaration of Reasonable Doubt’ published online and the release of Roland Emmerich’s 2011 movie, ‘Anonymous’ , which champions the seventeenth Earl of Oxford, Edward de Vere, as the true author of Shakespeare’s plays. It has even seen one prominent Oxfordian (as champions of Edward de Vere are known), noted Shakespearian actor, Derek Jacobi, expressing his doubts about authorship on primetime British television.

For these several reasons, the editors of the book currently under discussion, Paul Edmondson and Stanley Wells, have gathered together contributions from leading Shakespearean scholars in an attempt to try and settle the matter of authorship once and for all.

A title like ‘Shakespeare Beyond Doubt’ should leave the reader in no doubt as to which side the essays in this volume are weighted towards. The book is split into three sections. The first section examines the various claimants that have been advanced as alternative authors to Shakespeare’s canon; Sir Francis Bacon, Christopher Marlowe and Edward de Vere, as well as some of the more unusual candidates, like Elizabeth I. The middle section looks at the various arguments that have been put forward as to why Shakespeare couldn’t have written the plays and provides extensive evidence to refute these claims. Finally, the book looks at the history of the authorship debate itself, including individual critiques of both the ‘Declaration of Reasonable Doubt’ campaign and ‘Anonymous’ movie.

‘Shakespeare Beyond Doubt’ isn’t just a clever title, for no one should be any doubt by the end that the William Shakespeare of Stratford-upon-Avon is the same William Shakespeare that wrote Hamlet, Othello, King Lear and all of the other plays that are ascribed to him. Indeed in reading this anthology, one comes more and more to see his detractors, Anti-Stratfordians as they are dubbed, as akin to creationists, crying aloud that we should ‘teach the controversy’.

Yet the controversy is that there is no controversy. Evolution is definitely true, as has been amply demonstrated by examination of the fossil record, radio carbon dating and DNA sequencing. Honestly, if scientists had got things so badly wrong at this point, you would expect aeroplanes to fall out of the sky a lot more often than they do, which is almost never.

Similarly, ‘Shakespeare Beyond Doubt’ catalogues the various methods which have been used to put the question of authorship beyond all reasonable doubt. There is ample historical evidence to show that Shakespeare was acknowledged during his lifetime as a great playwright and sufficiently mourned at his death in 1616 that elegies were written about him. The bust of Shakespeare at Holy Trinity Church, Stratford-upon Avon was installed in 1623, the same year that the first folio of his completed works was published, prefaced with a poem by his contemporary, Ben Johnson, the authorship of whose plays has never been called into question, despite Johnson been raised the son of a bricklayer. It should also be noted that quarto editions of several of Shakespeare’s plays were published during his lifetime.

Then there is the textual evidence. Shakespeare did not always write alone and where he collaborated with other writers like Thomas Middleton and John Fletcher (tentatively, perhaps, even Marlowe), textual examination can tease out which scenes were written by whom. Moreover, far from the usual rejection of a mere actor not being capable of writing such plays, James Mardock and Eric Rasmussen reveal an author intimately acquainted with the workings of the theatre, structuring scenes in such a way as to allow his actors to play two or more parts during a performance. This skill reaches its apotheosis in Henry VI Part Three, where the action is constructed in such a way as to allow just twenty one actors to take on sixty seven different characters.

Two of the three main Anti-Stratfordian candidates, Marlowe and de Vere, were both dead by the time that many of the later plays were written. Advocates of Marlowe like to claim that he faked his own death, whilst the Oxfordians posit that de Vere wrote the plays at a earlier date than is generally acknowledged.

Yet Christopher Marlowe’s death is one of the most well documented events that survives from Elizabethan England. His body was presented at the coroner’s inquest, where it was examined by a sixteen man jury. The coroner’s report still exists, confirming that Marlowe died after being stabbed through the eye with a blade.

Oxfordians are on even stickier ground. De Vere died in 1604, yet the plot of The Tempest, one of Shakespeare’s last plays, is, as Alan H. Nelson explains, ‘clearly based on reports of a shipwreck which occurred off the island of Bermuda in late 1609’. Worse for Oxfordians, there was a general shift in English drama away from more antiquated words like ‘hath’ and ‘doth’ towards ‘has’ and ‘does’. Like carbon dating a piece of bone, the switch to the new forms occur in the canon of Shakespeare at exactly the time that they are traditionally held to have been composed. The case for de Vere is thin to non-existent. 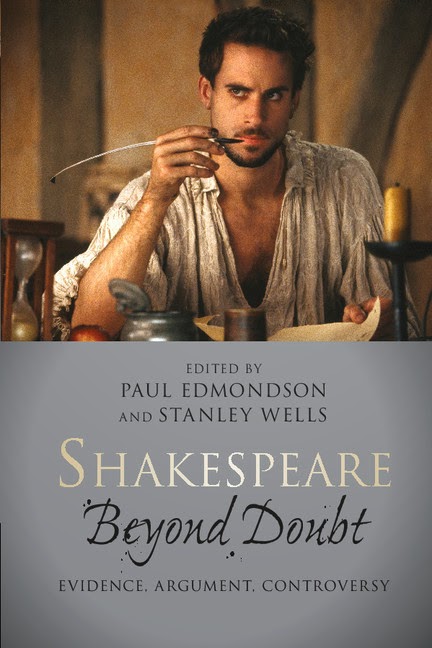 Perhaps it’s simply that we expect too much of Shakespeare. Four centuries of adoration  have conditioned us to expect the greatest writer who has ever lived and we translate this into thinking that his works are the greatest writing that ever could be written. We are wonderstruck not just by his words, but by the fame of those words, as when witnessing the Mona Lisa at the Louvre and being unable to decide whether one is impressed by the painting or by its fame. Who can hear Hamlet recite the words, ‘To be or not to be’ and not have mentally completed the line even before the actor has come out of his dramatic pause?

Like the Bible, we hear the beauty of the King James Version and somehow believe that the words are so perfect that they can have come only from God. The sublime rhythm of the English translation detracts from the actual content, which is riddled with absurdity, atrocity and flat contradiction. The same is true, to a lesser extent, with Shakespeare. There is a tendency amongst true aficionados to elevate every single word that Shakespeare wrote to the level of revealed wisdom. Yet as George Orwell noted in his essay, ‘Lear, Tolstoy and the Fool’, a lot of Shakespeare’s plays are padding. It’s not revealed wisdom, it’s killing time, filling out the plot, giving the Elizabethan audience its money’s worth. The Tempest is a brilliantly written play, but even a diehard Shakespeare fan like me finds himself bored rigid when watching it performed, even when I have been fortunate enough to see Patrick Stewart or the late Pete Postlethwaite in the role of Prospero.

When he’s at the top of his game, there isn’t another writer anywhere or any time that can match Shakespeare. A lot of the time, however, he is, in the words of the Player in ‘Rosencrantz and Guildenstern Are Dead’, “Merely competent.” It’s time to take Shakespeare down off of his pedestal, or at least place him on one that isn’t quite so lofty. Then we might find a proper sense of perspective towards his works.

In fact, my favourite proof that Shakespeare was indeed the author of his own works comes from Isaac Asimov. Asimov, amongst other things, wrote a two volume guide to the complete works of Shakespeare, as well as two volumes on the Bible. He also wrote the article, ‘Bill and I’, included in his 1972 collection of science essays, ‘The Left Hand of the Electron’.

In, ‘Bill and I’, Asimov argues that rather than think of Shakespeare as being too uneducated to have written the plays, it might be more useful to think of the plays as being too ill informed to have been written by any of the other usual suspects. He notes that during the Elizabethan era the prevailing view of the structure of the universe was still that of Ptolemy. The Ptolemaic view was of a geocentric universe, the Earth immobile at the centre, with the Sun, Moon and the five know planets (Mercury, Venus, Mars, Jupiter and Saturn) each occupying one of nine planetary spheres. These spheres moved independently of each other against a fixed background of stars that were set on an eighth sphere (the ninth being the ‘prime mover’, which set the universe in motion). This set up was held to account for the relative motion of the planets against the backdrop of stars during the course of the year.

Yet Asimov notes that the writer of both ‘The Merchant of Venice’ and ‘A Midsummer Night’s Dream’ seems to think that each and every star occupies its own planetary sphere, rather than being all fixed, relative to each other. He therefore concludes that a well educated man like Bacon or De Vere would not have made such an obvious blunder, but a man with just enough grammar school education like Shakespeare of Stratford could have done.

I’m not sure that I entirely agree with the theory, but I find it a pleasing one, because it once again demonstrates that the doubts surrounding the authorship of Shakespeare’s plays come down not just to classist snobbery, but to the desperate need by some to give credit where it is not appropriate. Shakespeare was a genius, to be sure, but a flawed genius. What other kind of genius is there?

The incredulity that a lowly glover’s son could have written such works comes out of the same kind of mentality that can’t fathom how the ancient Egyptians could have constructed the pyramids, leading to the only obvious conclusion that they must have been built by aliens. The fault lies, Dear Brutus, not in the Egyptians or with William Shakespeare, but in the paucity of imagination of the conspiracy theorist, which is all that the authorship debate ultimately boils down to. It has no more validity than the notion that the moon landings were faked or that 9/11 was an inside job. Or like a creationist vision of the universe, the alternate premise is meant to explain away the impossibility of the accepted version of events, but ends up being infinitely more messy and unsupportable than the original.

It’s a pity that ‘Shakespeare Beyond Doubt’ needed to be written and compiled at all, but we live in interesting times. Given events of recent years, a book like this was needed and its release in April of last year was timely. It’s a fine addition to the already substantial number of works dedicated to Shakespearean scholarship and I would advise anyone with a fascination with the Bard to give it a read. You will find in its pages ample ammunition to use against those who cast doubt upon Shakespeare the writer. Not that we need worry about it that much. ‘Anonymous’ was a flop at the box office and no more than a couple of thousand people out of the hundreds of thousands of Shakespeare’s experts and admirers have signed up to the ‘Declaration of Reasonable Doubt’.