Today is Bloomsday. To celebrate the day on which James Joyce’s ‘Ulysses’ was set, 107 years ago, I have written a trilogy of new pieces. Happy Bloomsday! Enjoy (click on images to enlarge): 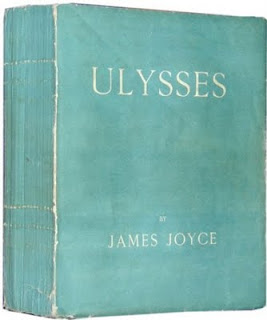 Ulysses “Seen”
As should be readily apparent by now, I love ‘Ulysses’ and all things Joyce. Since his works were first published, it’s from the United States that the most interesting and enlightening Joycean work has come (ironic, given America’s significance in ‘Finnegans Wake’, representing the afterlife to Dublin’s Egypt). From Joseph Campbell and Henry Morton Robinson’s book, ‘A Skeleton Key to Finnegans Wake’, written in the years immediately following the book’s release against noises of general derision, to ‘James Joyce Quarterly’, published since the 1960s by Tulsa University, Oklahoma, American scholarship has embraced Joyce like no other country outside of Ireland. Maybe even more so.
Today, the most interesting interpretation of Joyce’s novels is still coming from the other side of the Atlantic. In Philadelphia, a small group of artists and scholars have set themselves a task that has something of the Herculean rather than Odyssean about it. Robert Berry, Mike Barsanti, Josh Levitas, Janine Utell and Chad A Rutkowski of Throwaway Horse have set out on the epic quest to translate ‘Ulysses’ into comic book format. ‘Ulysses “Seen”’ is the result, published online and through its own iPad app. The project is still in its infancy, with only two chapters so far completed, but that’s one of the many exciting features of ‘Ulysses “Seen”’. There is so much more of it to look forward to. 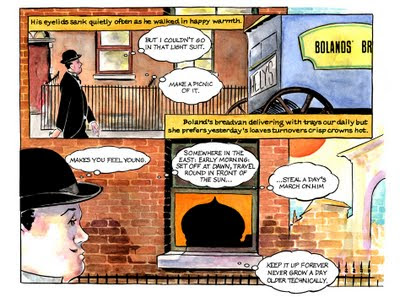 Partly, one wonders why no-one has thought to draw ‘Ulysses’ before. It is after all a book of the senses, every page alive with sights and sounds and smells. ‘Ulysses’ is also a great sprawling novel. Despite being set on a single day, it veers wildly off course in time and space and reality, before returning to the streets of Dublin, 16 June 1904. You can therefore appreciate why no-one’s been brave enough to make the attempt. It would be all too easy to make a mess of the entire venture. Spend thirty minutes in the company of ‘Ulysses “Seen”’ and you realise that the book is in very capable hands.
Of course no comic book, no matter how beautifully rendered, can substitute an actual reading of the novel. Yet, for first timers, ‘Ulysses “Seen”’ is a splendid introduction to a challenging novel. For those of us who have long since put that first, difficult reading behind us, rereading and rereading until we know its passages so well, ‘Ulysses “Seen”’ brings a new twist to an old favourite. Reading any book is an act of symbiosis between writer and reader, the one sketching out an outline, the other filling in shadows and colours from their individual experience. Yet there is so much going on in virtually every word, clause and sentence of ‘Ulysses’, that a visual production is an ideal way to illuminate a number of key passages in the text. TV or film couldn’t quite manage it, too much would still get lost between the gaps. The comic book format, with its traditional mixture of images and thought bubbles, is a much better bet. 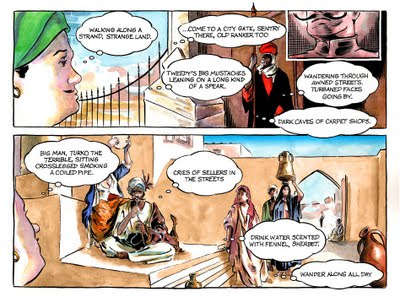 We can get an idea of why this is so by considering a number of panels from ‘Calypso’ in ‘Ulysses “Seen”’. Leopold Bloom has popped out to the butchers. As he makes the first of many journeys across Dublin, he thinks about his wife still lying in bed, nymph like, behind him in Eccles Street. Molly was born in Gibraltar and as Bloom’s mind drifts, thinking about the track of the sun, Dublin is transformed into a Moorish scene of minaret and casaba. Bloom daydreams about faraway lands, his black suit and bowler hat transformed into bright yellow robes and green turban. Then we see him think, “Probably not a bit like it really.” and the rounded Arabian skyline returns to the flat tops of Dublin. 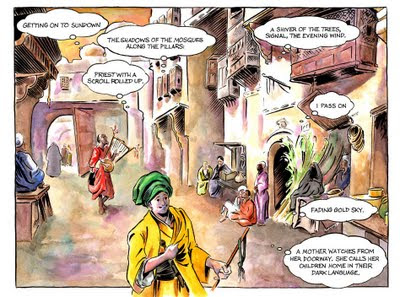 The series of images here make me think of an episode of ‘Mr Benn’, although I appreciate this association is meaningless to anyone not brought up on 1970s British television. The scene is one of many visual jokes, one of many Ulyssean comments on the chasm between perception and reality that can get lost in a purely literary reading of the novel. ‘Ulysses “Seen”’ manages to tease out some of the detail and obscurities. It can’t catch them all and nor does it try. Yet there is more than enough here to entertain and enthral and send the viewer back to the text with a fresh appreciation of the genius of James Joyce.
‘Ulysses “Seen”’ is a joy to behold and I look forward to the chapters that are to come. I can’t wait to see what they do with the newspaper headlines in ‘Aeolus’ and the gigantism of ‘Cyclops’. I can’t wait to see Bloom’s coronation, his trial, his transformation into a woman in the Mabbot Street brothel of ‘Circe’. And at the end of it all there will be Molly Bloom and her unpunctuated soliloquy. There are many years and adventures ahead of us. If you’re a fan of ‘Ulysses’ or the comic book genre, head for www.ulyssesseen.com. See now! 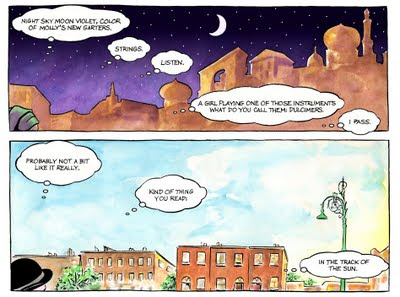 Ulysses Found
I was born on 2 February 1973, exactly 91 years to the day after James Augustine Aloysius Joyce. So, at the end of January 2004, I set off on a pilgrimage to find his grave.
It didn’t start well. I could have just flown straight to Switzerland, but that would have been too easy. Instead, I decided to fly from Liverpool to Paris first, spend a few days in the city where Joyce finished writing ‘Ulysses’, then catch a train to Zurich.
I spend the night before departure with my cousin and her boyfriend over the water in Birkenhead. In a rush to get out in the morning, I manage to leave a pair of jeans behind, with my bankcard in the back pocket, and have to use a credit card for the rest of the journey. Then I nearly miss the bus to John Lennon, a bus which seems to need to travel almost 360o around the perimeter fence before it can enter the airport. Still, I’m Henry Rollins like in the speed with which I fly through customs and in the end have thirty five minutes to spare.
Fuck me, I think, as we fly south, how can people do this day in, day out and not convert to Buddhism? Before today, I had been on a grand total of three flights. The first was an internal British flight when I was about eight months old. The second a 1950’s Cessna with no door. I jumped out of that with a bit of canvas strapped to my back. The third flew from Madrid to Liverpool, me with a girl terrified of flying who had to drink almost an entire bottle of vodka before she would even contemplate boarding. Luckily it was pitch black outside, but I still spent most of the three hour flight trying to keep her calm.
At 29,000 feet you finally realise why so many of those men who went to the Moon didn’t come back quite the same. The plane’s silhouette is cast upon a bank of cloud cover, backlit by the sun. Doughnut shaped rainbows are projected by the cabin windows onto the ruffled hills beneath, which are thrown like a duvet thrown across the world. And then a break in the cover and geodesic fields are revealed beneath, dusted with snow. Motorways cut into landscape. Man’s order imposed upon nature. 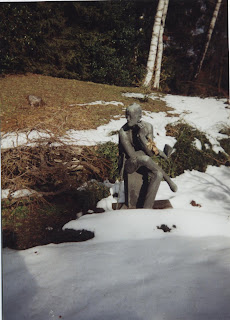 Then it clicks. For reasons best know to themselves, the Swiss have put the month in Roman numerals. Not 2 11 1882, but 2 II 1882. I feel an enormous sense of relief. I send some texts, take some photos, then read from Portrait and feel immensely pleased with myself. It may not be the source of the Nile, but it is the source of much that is important to me (see Ulysses Prime).
I don’t know what I hoped to find when I got here. I think in my head I half expected to find the girl of my dreams laying flowers at Jim’s grave. I am nothing if not a hopeless fantasist. I stay an hour, but no one else shows up. I guess Bloomsday is the major event in the Joyce calendar. At least it happens in summer rather than the dead of winter. Helen, who I stayed with before flying out, was born on Bloomsday. My brother was born on St Patrick’s Day. A proper Irish family. Well actually, no, asides from having Irish ancestry and a few accidents of birth, that’s about it.
For the rest of the day, I revert to my default state and wander aimlessly around town, listening to ‘Blood on the Tracks’. Down to Lake Zurich to take some photos of the Alps, then up to the Botanical Gardens, which are more like an allotment. Then back up the hill to find the FIFA building: A complex as soulless as the organisation it houses. I manage to get lost on the way back down and walk for hours before finding the right road. Yet before long I am sat in a cafe, back by the shores of Lake Zurich, eating sausage and half a chicken.
Our birthday ends back in my hotel room, having my first alcoholic drink in six months (vodka and coke) and watching the UK Snooker Championship on Eurosport. The holiday would end, after a day in Geneva and a 6.30 flight the following morning, with me watching the final of the snooker in a coffee shop in Amsterdam. But as Amsterdam has nothing to do with James Joyce or ‘Ulysses’, that’s a story that can wait for another time. 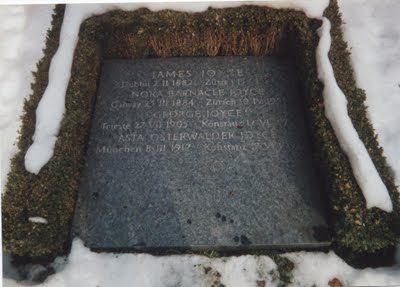