In Appreciation of Captain Beefheart

In Appreciation of Captain Beefheart 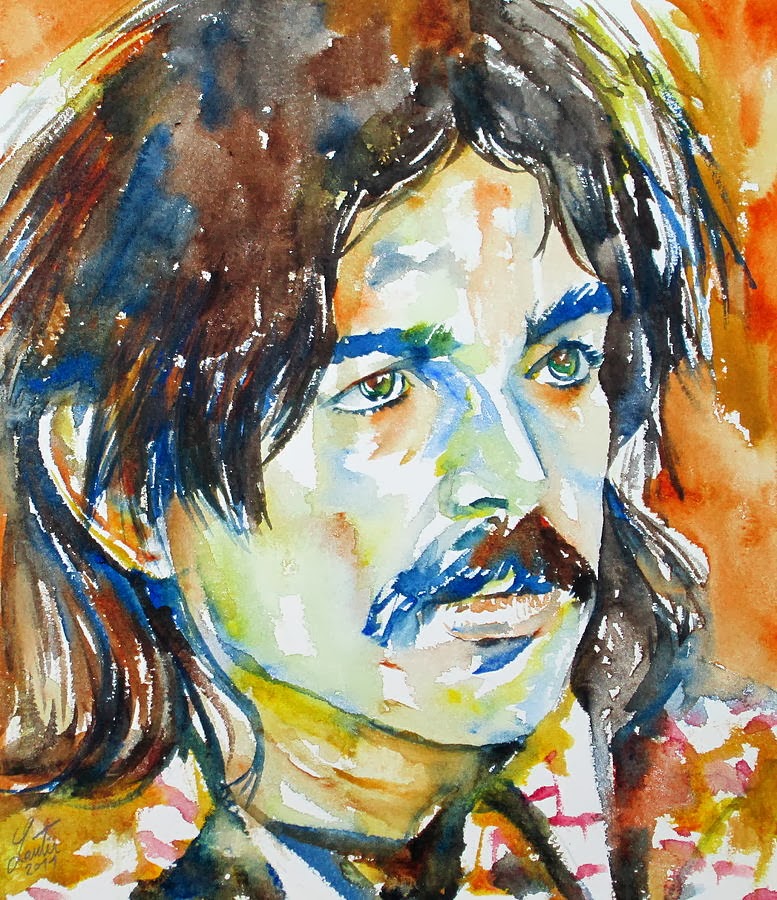 The first year of the millennium found me working at a temp job with a girl who would become my girlfriend during the course of the contract. There was only the two of us working in the room, so she brought in a tape deck and we would take turns to play music for each other. As we listened to The Kinks, The Beatles, The Clash, Stones, Elastica, Joy Division and Dylan (even Bill Hicks and Eddie Izzard), we’d also talk music to while away the hours.

One day the conversation turned to Captain Beefheart and how neither of us knew much about him, except that ‘Trout Mask Replica’ was supposed to be a masterpiece that sounded like white noise when you first heard it. We ended up driving to the local library that lunchtime to see if they had it. They did, but the CD was out and someone had it reserved for when it came back. I ended up buying a copy from HMV after work and putting it on tape for the next day.

She was either hung over or hadn’t got much sleep the night before, but what I remember is her with her head cradled in her hands, begging me to turn it off because it was making her brain bleed. She’d lasted twenty minutes into an hour and twenty minute long album. Someone once told me that if you’re going to be drinking mixed spirits, like rum and coke, you should always have the first one neat. This will make every subsequent drink taste mild by contrast. I mention this only because the comparison with Captain Beefheart’s back catalogue is apt. Listening to ‘Trout Mask Replica’ first renders everything else the Captain did mild by comparison. ‘Trout Mask Replica’ is a masterpiece by a twisted genius, who kept his band under cult-like conditions in a house in the suburbs of LA for eight months, where they were made to practice the tortuously complicated compositions for fourteen hours a day. On coming to record the album, produced by Frank Zappa, the majority of the music was recorded in one four and a half hour session.

‘Trout Mask Replica’ is a difficult album, full of free jazz and irregular rhythms and off key horns. Not being a musician, the only thing I can compare it to is that perennial favourite of mine, the novel ‘Finnegans Wake’. The first time through it simply makes no sense and even by the tenth, the hundredth time even, parts of it will remain bafflingly obscure forever. Like jazz, you have to learn to speak a new musical language in listening to Beefheart. ‘Trout Mask Replica’ is like a Latin primer for everything that sits around it. I read somewhere that ‘Dachau Blues’ is the song you play at the end of a party when you want to get rid of the last stragglers. I agree. A masterpiece to be sure, but fourteen years after first hearing it, ‘Trout Mask Replica’ is a still a masterpiece I have to be in a very particular mood to be able to listen to.

It’s only the first shot of the evening though. If you can survive ‘Trout Mask Replica’ then you’re well on your way to appreciating Captain Beefheart’s genius. His first two albums, ‘Safe As Milk’ and ‘Strictly Personal’ almost sound like typical 60s pop records when placed next to his third. Almost. ‘I’m Glad’ could be a Motown single, but with ‘Ah Feel Like Acid’ and ‘Electricity’ we’re in more familiar Beefheart territory. What makes his music unlike almost any other artist in musical history is Beefheart’s refusal to conform to anything like a regular rhythm. His music rarely does what is expected of it. Even reggae isn’t as offbeat as Beefheart.

The first couple of offerings are as near to mainstream as anything Beefheart ever recorded, mixing blues, rhythm and blues and 60s psychedelia. His dig at the Beatles and Rolling Stones in ‘Beatle Bones ‘N’ Smokin’ Stones’ (“strawberry moth; strawberry caterpillar strawberry butterfly; strawberry fields”) signified the change that was about to occur.

After ‘Trout Mask Replica’, he never looked back. ‘Lick My Decals Off Baby’ is almost a continuation and again I have to be in the mood. Yet, ‘The Spotlight Kid’, ‘Clear Spot’ and especially, ‘Shiny Beast (Bat Chain Puller)’ are extraordinary albums that can lift the mood in a heartbeat. Boy bands and a thousand and one guitar orientated rock clones send the workforce somnambulistically to production line office death camps for the soul. Try listening to ‘Bat Chain Puller’, ‘When I See Mommy I Feel Like a Mummy’, ‘Sun Zoom Spark’ on your way to work and see how long it is before you despair of your situation. I doubt many ‘X-Factor’ contestants who sang ‘Run Paint Run Run’ or ‘Big Eyed Beans From Venus’ would get through the auditions, or whatever it is they do. I don’t know, I’ve never seen ‘X-Factor’. I have thumbs. 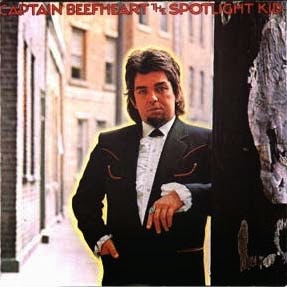 Tom Waits’s fans subdivide his back catalogue into two eras, the one before he heard Captain Beefheart, and the period after he heard Captain Beefheart. The Captain’s influence on his music is obvious and it is revolutionary, for which we have to thank Waits’s wife, Kathleen Brennan, who got him deeper into Beefheart (Waits and Beefheart shared a manager in the 70s). Waits released some great albums pre-Beefheart, like ‘Blue Valentine’ and the live album ‘Nighthawks at the Diner’, where he’s virtually channelling the spirit of Jack Kerouac. Since1983’s ‘Swordfishtrombones’ up to 2011’s ‘Bad As Me’ inclusive, Waits has been on another level. In recent years, he has eclipsed even Dylan as my favourite recording artist. The influence of no-one else seeps through to his music quite like Captain Beefheart.

Beyond Waits, Beefheart’s influence is wide. You can hear ghosts of his rhythms in many ‘Talking Heads’ albums, particularly ‘New Feeling’ and ‘Psycho Killer’ from their debut, ‘Talking Heads: 77’. ‘Beck’ and ‘The White Strips’ have covered songs by Captain Beefheart. You also hear his influence in much of ‘The Fall’. It’s what makes ‘The Fall’ so great, Mark E Mark the Mancunian Beefheart (compare, ‘Who Makes the Nazis?’ with ‘Dachau Blues’). He even recorded a version of ‘Beatle Bones ‘N’ Smokin’ Stones’ on one of their peerless performances for John Peel (see ‘The Complete Peel Sessions’ disc 5). Peel himself said, “If there has ever been such a thing as a genius in the history of pop music, it’s Beefheart.”

Then there is Beefheart’s influence on PJ Harvey, a woman whom I can’t say enough about (though I had a go, see ‘The Sombrer Opacities of the Gloom’). Up until his death in December 2010, Harvey would send Beefheart advance copies of her albums. This fact alone makes her more boss than virtually any other artist alive. Her early albums are infused with Beefheart’s influence, but of all his musical godchildren, Harvey found her own way. PJ doesn’t stay still for very long and by the time of her own masterpiece, ‘Let England Shake’, very little trace of Beefheart remained. 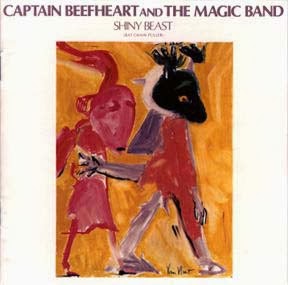 In 2004, I saw former members of Captain Beefheart’s Magic Band perform a full set of his tracks at the Manchester Bridgewater Hall. It wasn’t all that. Without the Captain’s effervescence, it felt like we were watching session musicians going through the motions. The middle section of the set was entirely instrumental. I saw a few hard core Beefheart fans walk out in vocal disgust. The real deal hadn’t recorded an album in over thirty years, not since 1982’s ‘Ice Cream for Cow’. His music never gained the widespread appeal it deserved and he abandoned the music industry for painting. He became a ‘recluse’ (a label used by journalists for people with who don’t want to talk to them). He’d also started to suffer symptoms from the onset of multiple sclerosis.

Sadly, as is often the way, it was only after the Captain’s death that I went back and discovered the rest of his back catalogue. ‘Trout Mask Replica’ should have opened to doors to discovery, but I was too engrossed by his disciples. We get where we need to be in the end. Now Beefheart is ingrained deep down in my soul. Safe as milk.