The lyrics to Gone Time came about from reading 'Divine Invasions: A Life of Philip K. Dick'. I have a number of problems with the book. For a start, the author, Lawrence Sutin, is obviously a bit of a fanboy, which doesn't leave much room for objectivity. Also, I assume the author felt too embarrassed to call his subject, Dick, all the time and so he resolves to refer to him, without variation, as Phil.

Now, 'Phil' was a writer with many of the associated personality disorders that are common in writers. 'Phil' was married 5 times, and he seems to have been physical with most of his wives. So it really jars to hear recounted tales of domestic violence, interrupted by the chummy, 'Phil', all the time.

It got to me, it annoyed me. I'm used to reading about male 'role models' whom I feel ambiguous towards. You want an introduction to the history of Jazz, read Miles Davis's autobiography. You may come away still considering Davis a musical genius, but it's impossible to like him, not after the countless beatings of girlfriends, wives, the prostitutes he pimped to raise skag money, all rounded off with a shrug and half-arsed apology.

Or Gandhi. Gained India its independence from the British, but let his wife die of appendicitis because he said antibiotics were unnatural. Yet when he needed surgery, he took antibiotics, morphine, the lot. Far from being a pacifist, Gandhi fought for the British in both Boer Wars and was a recruitment officer during the First World War. He was also a fervent believer in the caste system. He went on one of his famous hunger strikes in response to a suggestion that the Untouchable caste be abolished. As with most revolutions, Indian independence really only meant independence for the top tier. Not that you'll hear about any of this in the Attenborough film, but then it was partly funded by the Indian Tourist Board.

All of which raises an important question: How much is too much? How much of a prick does someone have to be before they are removed from the artistic roll-call? I don't know that I have an answer.

The 1st verse of Gone Time plays on this veneer of male respectability, a pillar of the community, who's true nature only breaks the surface in the last line. The 2nd verse is an old Bob Dylan trick, playing time backwards, each line bringing us nearer the actual event.

Phil was for everyone, Phil topped polls.

Phil kept a tavern called, 'The Gambolling Foals'.
Phil had a rowing boat to save our souls.
Phil filled his Phillie with a splatterful of holes.

Say Phil, Phil, it's twenty minutes' time,
Since the bitch had it comin' f'talking outta line.
Belly-worth of bourbon and a face full of wine.
Gently arching crimson in a parabolic line.

Don't know why I wonder, but wonder if you will,
Why no one gets the name of the victim of the kill.
Get fifteen minutes fame for every victim that you maul,
Don't know why I feel it, but I'm properly appalled.

So Phil, Phil, had enough cane?
Mopping up the spillage from a heartfelt vein.
Coming on for dawn now, coming on to rain.
Blue light flashing in a high Vault pane. 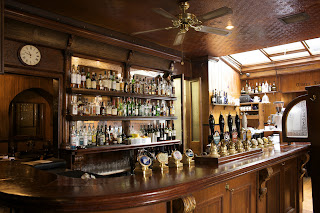