Bertrand Russell, who by any standard is one of the leading intellectual figures of the twentieth century. He was one of the very few leading intellectuals who opposed World War I. He was vilified, and in fact ended up in jail, like his counterparts in Germany. From the 1950s, particularly in the United States, he was bitterly denounced and attacked as a crazy old man who was anti-American. Why? Because he was standing up for the principles that other intellectuals also accepted, but he was doing something about it.
Noam Chomsky 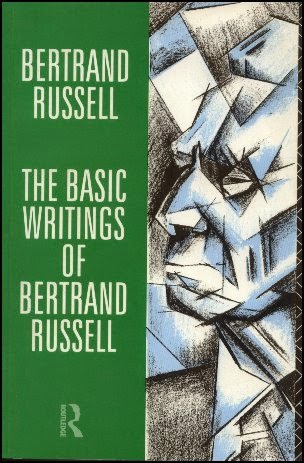 There can be few books that have been titled with such wilful understatement as The Basic Writings of Bertrand Russell. Any book which includes sections on philosophy, logic, mathematics, linguistics, relativity, education, ethics, psychology, history, politics, religion, metaphysics, epistemology, east/west relations and the future of the human race can hardly be described as basic.

Then again, by the standards of Bertrand Russell, perhaps this is basic. He was a prodigious writer on all of the above subjects and a great deal more and for years I have liberated copies of his many books with titles like Political Ideas, Sceptical Essays, In Praise of Idleness and The ABC of Relativity from second hand book shops.

I like Russell because he thought the things that may people think, but actually did something about them. He was born in 1874 to Lord and Lady Amberley, both of whom died when he was young, and he was raised by his grandmother, Lady Russell, in virtual isolation. It was expected by his elders that Russell would take up a career in politics, but his passion was for mathematics and philosophy. As a member of the ruling classes he could have taken the easy way out, acted as minister in a Liberal government, taken up his seat in the House of Lords, not been a bother to anyone. Instead, he went in the opposite direction, serving time in prison for his opposition to the First World War, being sacked from his professorship at City College in New York for his views on sexual liberation, vociferously supporting the campaign for nuclear disarmament. In 1957, Russell wrote an open letter to both Eisenhower and Khrushchev, calling for an end to the Cold War. Similarly, at the time of the Cuban Missile Crisis, he sent telegrams to both Khrushchev and John F Kennedy. Khrushchev assured him that Russia would not be reckless, whereas Kennedy returned his telegram unopened.

Most people would, I think, be glad to have lived half the life that Bertrand Russell lived, displayed half the bravery and understated intelligence that Russell displayed. What comes across from reading this collection of articles isn’t just the sheer depth and breadth of subjects of which Russell was informed enough to talk about, but also serves as reminder that simple ideas and statements sometime need to be reiterated. In my own writing, I often reject trains of thought as they seem so obvious that it would be patronising even to mention them.

Yet simple ideas aren’t always obvious to everyone and even when they are, they bare restatement as a kind of reset button when the world seems to have lost its mind. Russell’s thoughts on religion, politics and education are often simple but never simplistic. It’s worth being reminded that the purpose of education isn’t to teach but to indoctrinate, to question why agnosticism towards God or heaven is any less sensible that agnosticism toward Zeus or Thor, to remind politicians that global conflict is in no one’s best interest except the manufactures of the weapons. Russell never tired of stating and restating his thoughts on these subjects.

Russell’s principal academic pursuits though were in the regions of philosophy and mathematics and there is much in this volume regarding both subjects. Philosophy is often used as a dirty word in the scientific disciplines, yet I think many physicists would benefit from a working knowledge of philosophy, as would philosophers benefit from a little knowledge of basic physical principles. Sadly it is often a case of never, or rarely, the twain shall meet and before Russell, the last significant mathematician-philosopher was probably Rene Descartes in the 17th century. Russell wrote two major works on the history of philosophy, A History of Western Philosophy and Wisdom of the West, sections from both of which are included here. A History of Western Philosophy in particular has been used as a standard textbook in British institutions for many years and I can highly recommend it for anyone who wants a good overview of the subject, as well as a critical overview of some of the major triumphs and failures in thought of the philosophers in question,  through from Socrates to John Dewey.

For a general overview of the work and thoughts of Bertrand Russell himself however, you could do worse than start with The Basic Writings of… At 736 pages, you certainly get a lot for your money and while you will almost certainly find some of it going over your head (it has taken me three abortive attempts to get past the sections relating to Russell’s Magnus Opus, Principia Mathmatica), time spent with Bertrand Russell is never time wasted. He was a rare breed, of which maybe only the likes of Noam Chomsky or Tony Benn bear comparison. He was politically active right until the end of his life, spending seven days in prison in 1961 for his involvement in anti-nuclear demonstrations at the ripe old age of 89.

Russell died aged 97 on the 2 February 1970, exactly three years to the day before I was born. I would like to have known him, but he left such a plethora of publications that settling for the next best thing isn’t a million miles away from this desire. Our great and prolific writers get read less and less these days. It is our duty to reintroduce them to new generations. There is much that they can teach us.