You'd never forget it if you'd been there. The day the clouds came to life. Everyone laughed at first. Thought it were a big joke. Didn't last.

Happened all down the west coast they said. Got stronger nearer the sea you were. So picture yourself. You're down the beach with your kids, paddling, building sandcastles, eating egg sandwiches. You try firing your kids' imaginations, pointing up at shapes in the sky. "Look Tommy, choo-choo train." "Good boy, it's like a bear isn't it." "Aye, very like a whale." But looking on you see that that vague collection of shapes looking a bit like Tommy's best teddy bear starts to look more and more teddy like. The clouds sausage and balloon to resembles arms and legs and a body and head. Sunlight spotlights down upon the stomach and other tricks of shade leave the surface bathed all in brown. And as his fluffed up ears drift in on a strong south-westerly breeze, his head shifts and his arm lifts and he turns to wave at you.

People saw that kind of thing all the way through the first day. Favourite childhood toys, Spitfire squadrons, flocks of car keys crawling past Cardiff Bay. A procession of photo frames descended over the sea, seen for miles, each a different design and containing a different image. There were holiday snaps and honeymoon pictures and drunken nights out. They were random and yet each one meant something to someone within view. And as people continued to watch, each frame dissolved from oak and gold to white and grey and drifted away like smoke. The images were freed and they expanded out of their confines, spreading out across the sky. Smaller images soon succumb to grander designs. Machu Picchu became the dominant image over Cumbria, the mountain tops hanging high on the horizon, row upon row of stone buildings beneath them and set around a grass centre that glowed in eerie green. They said the TV images didn't do it justice, but you got vertigo enough even then. The way you could be looking at the horizon and feel like you're hanging a hundred miles in the sky. Knocked people sick.

It was an amazing effect and strangely few people felt bothered by it at first. There was a lot of chatter on Twitter and iMargin and Facebook saying it were a publicity stunt. Some new top secret technology that had been invented and this was how they were showcasing it.

Still, even then odd things were happening. Like one frozen image would collide with another and merge. The results were dynamic and played out in real time for all to see. Two events in particular, the wedding congregation that got hurled at Machu Picchu, and the Malibu beach party that was inundated by a team attempting to climb Mount Everest, will never be forgotten by anyone who witnessed them. The images are burned on to your eyelids. Thank god they didn't have sound yet.

Towards the end of the first day, they seemed to fade. There was still some summer in the air and towards evening the sky opened out on to this sheet of blue glass that was made to fit the skyline. But as blue became black and faint shapes drifted across the canvas, that's all that remained. People, no matter how much they wished for it, no matter how they spoke aloud, what they thought they could see, they couldn't make the indistinct take shape.

But then, just as the last light faded and the horizon began to diminish, a thousand exact copies of Michelangelo's David flew in formation down the Mersey and out to sea. Night brought only the stars.

By ten next day dozens of Facebook groups and #hashtags were in operation and they'd been busy.

Up and down the coast, amorphous shapes writhed to find something better formed. Heads had tossed and turned in the night. What if, they had thought, a group of people thought about the one thing at the same time? What would happen then?

They soon found out. Local groups would issue their instructions and everyone in the group would concentrate on the image and stare at the sky. It would start out straightforward enough, simple shapes, prime colours, basic animals and the like were fine, but the troubles started when they tried anything more complicated. Anything as simple as a chair proved tricky until the commands became more descriptive. #chair resulted in a mess in the sky. #brown-plastic-school-chair did better.

It were worse for tables, beds, cars, even if you could pin it down to a dinner table or first motor, the choice was still different person to person. Some groups included artists and sculptors and these groups benefited from having a guiding hand to focus the aggregate of ideas into something more refined. Most of the others were obsolete by lunchtime.

The dog lovers were fine. They'd separated down to their pedigrees groups early in the morning and the skies became like Crufts by afternoon. Cat owners could agree on nothing and so in a nation of animal lovers, the dogs reigned supreme in the skies. Terrier, herder, hound, each breed was rendered in perfect detail drifting down a runway of cloud. That and an occasional irritating Batman signal. They were the first sign that things were about to go wrong.

Someone made the simple genius idea of tweeting a photo of a chair or YouTube clip and getting people to mentally project it on the sky. Never occurred till then. Started to work. We formed cats playing piano and the Crazy Frog and the Mad Hatter's Tea Party, with a dozen celebrity guests fading in and out of focus. Celebrity pics were a bad idea. They were the quickest to get vandalised and then downright abused. I shouldn't laugh, and I know a lot of people sent picies of their favourite celebs out to share and enjoy with others, but if you posted a famous face and you and a few like minds made that image sharp in the sky, you were just asking for some cunt to come along and jizz on it. It was only a matter of when.

Folk returned to children's characters. They were harder to ruin. Wallace and Gromit, Kermit the Frog and the Muppets, an enormous Animal playing the clouds like cymbals and the rain coming down in torrents with every crash, bang and wallop. Everyone got soaked, but god, it were amazing and no one seemed to mind and no one seemed to notice they'd dropped way down in the sky. They merged into one thick edged bank of cloud and as the sun sank, showering it last rays, the shelf caught fire and poured away, straight-up, into space. The last wisp curled away like water down the plughole. It left a deep blue dome and a kinda green glow on the horizon.

In St Ives they had a showing of Raiders of the Lost Ark down on the beach. A bank of cloud came out of nowhere, whipped itself up into a ball and rolled down the beach in time to the boulder on the screen. It kicked up sand and some people screamed, but it rolled harmlessly over them and most saw the funny side. And when the spears started flying minutes later, many greeted them with open arms, not knowing they were tipped with ice darts. Seventeen people died. More got killed in the crush to escape.

They had us by first light. The clouds came down and stuck fast to the window frames. You went out only in emergencies and even then you pulled your hood down tight and you closed your eyes and you found your way from memory, not through what the clouds wanted to show you. That's how you ended up miles away. Months away.

It was better than night. No one wanted to be out at night when the groans started and the moans and the screams and the faces would appear at the windows. The displays in the daytime were often entertaining, even if not always pleasant; deathbed confessions, remembered sexual encounters, episodes of Dad's Army reconstructed over Twitter and broadcast into the ether and watched like watching live theatre from behind a curtain. You really got to know your neighbours over time.

No such joy at night. Put cardboard up over your windows and pull your curtains tight and wait for the lighter shade of grey that came at dawn. Don't step out at night. Not if you ever want to come back.

It took weeks to crack it. The same groups on the same sites had been probing the clouds for days with shared experiences, trying to find a way to make the mist disappear. Someone, we don't know who, figured out it were our own fears that made the fog to descend upon us. In the first days there'd been plenty of attacks, Bat Signals and swastikas getting plastered all over people's efforts. Pricks. When groups could operate free of trolls, combining wills on to one thought, they made great dents in the volume of the cloud. A clustering of groups on the west coast came together to focus on one image all together at an agreed point in the day. The image decided upon was the deep blue of the cloudless sky. Internet companies interrupted service to known trouble makers. The major faiths called the faithful to prayer. Everyone else crossed their fingers and concentrated at the appropriate hour.

A dark blue sky shone in the minds of hundreds of thousands of people on the west coast. Songs would be sung of this day. New allegiances would be formed because of it. The Cornish would become brethren with the Welsh; people in Southport would swear blood oaths with those in Kilmarnock. Some closed their eyes, fingers gripped, blue light filling up the dome of their imagination. Others stared out of the window or went out the front door and tried to force the fog back with their eyeballs. There was a standoff that lasted more than three hours.

Then people started reported seeing shapes in the mist. Those reports were quickly followed with confirmation that the shapes were other buildings. The mist was evaporating. People were urged across every medium available to concentrate, concentrate like you've never concentrated before. Samuel West was drafted in to read prose that waxed lyrical about the colour blue. And the cloud thinned and the reports multiplied and shortly before sunset the fog dispersed to nothing and we got to witness a fireball of gold that exploded in the west and disappeared beneath the horizon. And the blue that we had all wished for shone in the sky like cobalt glass. Cobalt faded to ultramarine to midnight blue to black. The stars came out at the fading of the day. Beach parties sprung up all over the west coast. Camp fires were lit, guitars strummed, balls kicked, the alcohol flowed. And soon everyone had returned to their own troubles.

And then the ships came and landed and the aliens came and now the only difference between genders is the ones who get decapitated before getting fucked in the ass by scaly lizard dicks and those who get decapitated after. We are dying down here. If there is anyone else out there, help us! By the mercy of whatever gods you believe in, please, please help us. 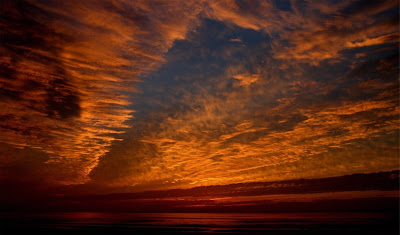