I hate complacency. Complacency is the tool through which special interest groups convince you that your way of life is under attack: And then they tell you who is to blame. Curiously, those responsible usually turn out to be the self-same people blocking the route to power of these special interest groups. Complacency leaves you vulnerable and once vulnerable the individual disappears beneath the weight and the inertia of the mob.

I’ve been thinking about complacency a lot recently, having reread Henry Miller’s sublimely cynical rant, The Air Conditioned Nightmare. Written in the 1940s, Miller had just returned to his native United States after a decade spent slumming in Paris. War was raging in Europe, America was about to enter the fray (late, as usual), and Miller set off on a journey across the continent to assess the state of the country of his birth.

What he found was a nation in decay. “Never has the status quo seemed more hideous to me.” he wrote. “This is not the worst place to me. But I am here and what I see hits me hard.” Actually, he just meant Pittsburgh, but his assessment was as bleak in Boston as it was in Los Angeles; New Orleans as in Mobile. Miller understood only too well the dangers of complacency. “Nothing is deader than the status quo whether it be called Democracy, Fascism, Communism, Buddhism or Nihilism.”

Today, as then, Americans feel that their way of life is under attack. We in Britain have often been jealous of the American capacity for boundless optimism and certainly during times of unending growth, when there is more than enough food in the trough, it is a fine attitude to possess. Yet the quality that many Americans have always lacked is a healthy sense of cynicism. When recession bites, when the rich plunder and the poor are blamed, well then a lack of cynicism is like having not been exposed to illness as child: You have no immunity. You become sick and put all your faith in snake oil salesman, like the oddly named Tea Baggers.

Reading The Air Conditioned Nightmare is an antibiotic shot to the arm. There are those even amongst Miller’s fans who describe the book as being uncharacteristically pessimistic and negative, but I don’t find that in its pages. What I take from it is a sense of realism, a sense of perspective on the American dream, which has always been just that, a dream. Miller observed his nation’s fears that its very institutions and way of life were under attack and his conclusion was damming:

Before you can start changing your life for the better, the first thing one needs to do is enter into a period of reflection and self-assessment. America is a country which from the outside looking in is tearing itself apart through tidal forces. The institutions which laid it low, dragging the rest of us with them, are now the ones who now ask the poor and dispossessed to have faith in them. The American Right is somnambulistically sleep walking into fascism, when what it really needs is to wake up and take stock of its place in the world. “How to become conscious?” Miller rhetorically asks us:

“It’s very dangerous you know. It doesn’t necessarily mean that you will have two automobiles and own your own home with a pipe-organ in it. It means that you will suffer still more – that’s the first thing to realize. But you won’t be dead, you won’t be indifferent, you won’t be insensitive, you won’t be alarmed or panicky, you won’t be jittery, you won’t throw rotten eggs because you don’t understand. You will want to understand everything, even the disagreeable things. You will want to accept more and more – even what seems hostile, evil, threatening. Yes, you will become more and more like God. You won’t have to have to answer an advertisement in the newspaper in order to find out how to talk to God, God will be with you all the time. And if I know what I’m talking about, you will listen more and talk less.”

This is Henry Miller finally reengaged with the world, a work as near to a restating of the principles of the Sermon on the Mount as anything written in the twentieth century, which is probably why, like the actual teachings of Jesus, it is almost entirely ignored in America. And yet there are passages contained within The Air Conditioned Nightmare that should be recited every Sunday in every church up and down the country. The American Right would have its followers believe that Barack Obama has destroyed America, and yet Miller observes that even by 1940 it had been a broken nation for a century or more.

“And so the future, which is always imminent, gets aborted and frustrated, shoved around the corner, stifled, mangled, annihilated sometimes... a world of finite curves that lead to the grave or to the poor-house or the insane asylum or the concentration camp or the warm, protective folds of the Democratic-Republican party.”

Henry Miller was far from perfect. That’s ok, none of us are. To err is human and Miller was certainly that. However, to live with one’s own imperfections is to be open to the possibility of being wrong. Only with that important precept in mind can one start to move forward, freed from the inertia of prejudice and paranoia and mindless patriotism, which another great American, Ambrose Bierce, called, “Combustible rubbish ready to the torch of any one ambitious to illuminate his name.” It’s almost as if he’d met Glen Beck. Then again, opportunistic chancers fill the pages of history. Men like Glen Beck are ten a penny and they are worth even less. People like Henry Miller are stardust in comparison.

Besides, there is always hope. “If you have a dream of the future, know that it will be realized one day. Dreams come true. Dreams are the very substance of reality.” You just have to be awake first. 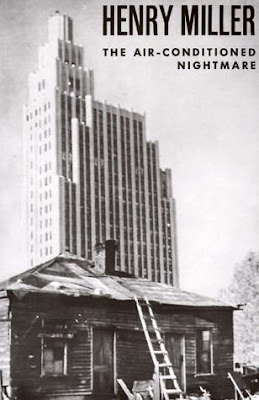