To celebrate 'the end of the world', I thought I'd post the prologue to something I've been working on for a while. It's far too long to go up in it's entirety, but here's a teaser:

“And when they shall have finished their testimony, the beast that accendeth out of the bottomless pit shall make war against them... and shall overcome them... and kill them.”

The beast that stood before them towered nine feet tall and growing. It morphed as it grew, its face swelling crimson. Two more faces appeared out of its cheeks, one of yellow, one brown, an unholy trinity of voices intoning the words in a phased, discordant chorus as they emerged. Its clothes fell away to reveal hoofed legs of thick brown fur, pendulous testicles and a cock standing proud and veined and purple. It continued to grow, now twenty feet high, great horned leather wings unfurling at its spine, chilling the air around them with each monstrous flap. And as it reached the apex of its transformation, it leaned back and held its clawed hands out to the sky and gave a blood curdling howl of delight.

“Yea, though I walk through the valley of the shadow of death, I will fear NO evil, for thou art with me, they rod and thy staff they comfort me.”

The woman that faced the beast had fallen to her knees. She stabbed a crucifix in its direction, her flamed red locks sodden, already blowing in the sea breeze and blowing all the more in the vortex of the beast’s wings. Though terrified, she faced the thing bravely, her chanting all but lost beneath the mockery that echoed back at her. The words whistled through the gap in her top teeth, a wild stare fixed on the creature, tears streaming from unblinking eyes.

Dan stood twenty feet away and watched the scene as from afar. Like the dreams and fantasies of his youth, time had slowed to a crawl, giving rise to those same feelings of dislocation and fear. He took it all in: the showdown between impossible creature and insane preacher, the volley of biblical passages, the rumbling of the storm clouds. The rain was pelting down, but the very raindrops were deflected from the beast’s form. The grass began to smoulder beneath its feet, grains of sand rose from the dune like dust in a static field, crackling in the air around it. A discarded motorbike lay on its side a few feet away, handle bar buried. A sailing ship bobbed in and out of view on the horizon.

All this Dan saw, yet watched not through his own eyes, but as through a TV screen broadcasting live from behind his retinas. Reality, not for the first time, seemed distant and unattainable. How had he arrived at this point? He thought back through the disappearances and the global panic, through the requests to meet his elusive relative, way back to the nightmares of his infancy and saw that he had overshot himself. Was there a moment when he could say all of this had begun? Was he really responsible for what had happened? What would Jim have to say about all of this? And when would this women realise that she didn’t have a prayer?

The heavens rumbled, the sky cracked, the flow of time resumed its natural course. Dan lifted his eyes to meet those of the triple faced thing and witnessed oblivion.

He closed his eyes. 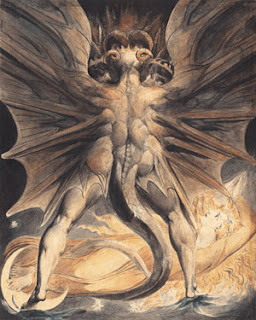