Once, long ago, there existed a small fishing port. In a farm on the coast there they laid claim to have hatched the original goose which laid the golden egg. Except this goose laid only one golden egg. No expense was spared to lavish attention upon the goose and it was given a palace around which to waddle and a great pyramid of the finest pillows on which it slept. Rose petals were thrown in its path and palm fronds cooled the air wherever it squawked and soothing string music played at all times in the hope that it would one day lay a second golden egg. The people offered sacrifices to the gods and prayed for their intervention, but the gods were silent to their pleas. One golden egg they had bestowed upon the people and that was as good as they were going to get.

As for the egg, it was considered priceless and of little practical value because nobody could afford to buy it. Instead, the port made its fortune from the pilgrims and tourists that came to see the famous golden egg. The egg was placed on a cushion and then under a glass case and then on a pedestal and then in a palace that people now paid to enter. And then it was decided that a second-hand palace was not a fit place for an object as rare as a golden egg and the elders planned to build a mausoleum grander even than that of Halicarnassus. And these fishermen became merchant sailors and built great fleets of ships which sailed the seas and brought back the ginormous slabs of stone needed to bring their mausoleum to life.

Yet the architects could not find a way to make the building as tall as the golden egg demanded. And soldiers on horseback rode into the neighbouring villages and kidnapped the sharpest minds and put them to work on the problem of the building's height. The rest they enslaved and put them to heaving stone. And their merchant ships gave way to warships and these excellent sailors now became pirates and looted the cargo vessels of their neighbours and aside from some petty pilfering that is always present in the pirating community, the booty was sunk into the problem of the mausoleum of the golden egg. The planned height of the building was achieved but immediately began to crack under the strain of the weight. Back to the drawing board the architects went and decided that the only way to stop the building from collapsing was to build it even bigger. Bigger and longer. And when that didn't work, they built it even bigger. And bigger. And bigger, until it could be seen miles from land. And all the time the sailors plundered from their neighbours further and further afield and their navy now controlled the entire strait and out to sea and they were the masters of their own destiny.

And eventually the beleaguered neighbours of this now powerful empire became tired with constant invasion and they clubbed together to fight back. And some other villages and towns got rich smelting and selling arms to the members of the alliance and they came not from the sea but on foot and invaded the port and burnt its buildings to the ground and picked off their ships coming into the harbour and desecrated the mausoleum and stole the golden egg for themselves. And finally they knew the truth.

The golden egg was just an egg. A goose egg overlaid with gold leaf. The finest gold leaf. The elders had started the legend as a way of driving income into the town but it had gotten out of control. Gold was even more rare and more expensive back then and hard to acquire and the mausoleum was built as a front for buying more and more of the gold leaf. Parts of it were always coming away in places and the egg went off and had to be replaced with an entirely new egg and entire new covering of leaf. The egg had once even hatched. As to what happened to the gosling, no account makes mention.

And the moral of the story? Figure it out for yourself can't you? Who died and made me tutor? 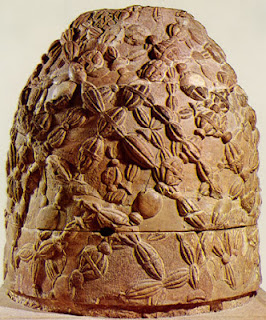