The Evil That Men Do


He didn't want me to know his name. Said he was ashamed of what he'd done and, well he just didn't. He doesn't remember I met them both going out. For him years will have passed, decades even. Sitting here at the epicentre of this poly-metropolis, a mere three months have elapsed since I met them that first time. However, I will respect his wishes. Let's call them Cleo and Tim.

They were still together but it wasn't the same. I ran into them in the bar at a hostel. I like hostels. Meet all kinds of interesting people there. These days I mostly sleep on board the A.L.P., but now and then I like to check into these places to meet fellow transients and exchange information.

First time I met this pair they were picking up supplies before getting the 51 tram to Westwijk. That route takes you back to the 1870s. I asked them why they were going that far. They said they'd heard there used to be a man out in Montana that could push people back to earlier points in their life. I'd heard the same tales. They wanted him to push them back to the year they were 15. I had to ask why.

They'd been childhood sweethearts. Then at age of 15 her dad was transferred to the other side of the country. Tim soon fell for the daughter of the family that moved into her old house and soon forgot all about her. She was violently raped by her neighbour's son two months after the move and left pregnant. She miscarried and told it was unlikely she'd ever conceive again. The doctors were wrong. She conceived many times, but never for more than few weeks at a time. And yet still what she desired more than anything else was a child.

Tim and Cleo hadn't seen each other in fifteen years when they got back in touch over the internet. She was living up in Dundee and he'd emigrated to France. They met up in Paris and that was all it took to fall in love once more.

The relationship was tempestuous to say the least. She was forever flying into rages at him and with such regularity that he took to keeping a flat near work for when he found himself locked out of his own home.

And always at the end of one of these cycles she would take him back and cry and apologise and they would discuss why it wasn't working. Six months of trying and she hadn't managed to even conceive with Tim. She felt certain that it had to be him. If she was going to carry a child to term then it had to be with someone she loved before her life had been ripped apart. Only Tim could fulfil that role.

Then the rupture happened and they were one of the few lucky ones who weren't sucked away into oblivion. They travelled the empty roads and abandoned streets of Northern Europe and eventually found their way to this, the only bustling city left in the Benelux countries. And here they heard tales of Catapult Pete up in Montana and they knew what they had to do.

I let him tell me the first half of his tale again, nodding my head and raising my eyebrows at the appropriate moments and tried not to look bored. Eventually we got to the meat of his tale.

They'd thoughtfully taken gold with them into the past and once sold it bought them a handsome first class cabin on a liner sailing for New York. The crossing was perfect and with a sense of united purpose they argued all the less and laid entwined in each other's bodies until late each morning.

Once in the States, the going wasn't so smooth. There were no regular inland transport links to Montana at that time and the best they could do was to take the train to the end of the line and then hire horses and ride the rest of the way, risking attack from half a dozen new factions at every state border. But after many months travelling, they came to address given as belonging to Catapult Pete.

And Catapult Pete (for it was he) agreed to fling them back where they wanted to go in exchange for the remainder of the gold and provisions on their person. The deal was agreed and Catapult Pete, the very model of a Montana man, spat through the gap in his teeth and told them that his aim had been a little off since a bout of flu and flinging two of them at once would make it a trickier shot. They still wanted to go through with it so he lined them up at the side of his cabin and he took a run at them and he pushed them straight through the half logs and as he travelled backwards and forwards in time simultaneously, Tim felt himself fall into the 1990s.

He was coming out of the barbers. His fingers reached for his hair and felt the spike cut. He was holding a Walkman and a pair of headphones. The kind that went over your head and into your ears. He slipped them on pressed play. Iron Maiden's 'Seventh Son of a Seventh Son' roared in his ears. He knew the area well, he'd grown up here, and wandered home, humming to himself as he went.

I asked him what it was like to be a kid again. He said it was fantastic. Everyone looked so young. He said the clothes back then seemed so dumb to him the second time around and it made him cringe to hear the same pop shit coming out of his sister's radio. Luckily he had a well stocked heavy metal collection on tape back then and enough rechargeable batteries to keep him plugged in for hours.

Tim waited on Cleo to come and find him but after a couple of hours of soaking up the atmosphere at home and feeling a thousand and one twinges of deja vu, he went to call for her.

He said he knew before she even opened her mouth that it wasn't her. Or rather it was. It was Cleo as she had been at fifteen. It was Cleo at fifteen. Pete had said they might not come back on the same day and she might not arrive until tomorrow or next week or next year. Next year would be too late. They asked Pete what to do if one of them arrived back earlier than the other. Pete's advice was to carry on as they would have done until the other one arrived. Create too different a version of the past and they'd create a new timeline that the other one couldn't access.

So they went down to the lake and gazed at the weeping willows reflected in the water against a golden sky. And he put his arm around her and let her talk and talk, only occasionally prompting her, gathering information and re-remembered memories as she did so. He felt comfortable. This was the girl he fell in love with, not that bitter old witch who resented him for not fighting to keep her here, for not being there when she was attacked, for not being able to give her a child. Yet this Cleo had her whole life ahead of her and he knew he could save her.

He said it was virtually decided the next day. Before coming back Tim had memorised a number of sporting results in the hope of making some quick cash to run away with when they got there. By luck, one of the big race events was that next day. He checked in on Cleo but she was still plain old Cleo, confused but hopelessly in love.

He put on the suit his mum had bought him for his Nan's funeral and went down the betting shop. He said the bookmaker didn't want to take his money at first. He didn't say anything, but Tim could just tell. But as young as his face was, the eyes you can't disguise and Tim had old, weather beaten eyes and the bookkeeper took him for older. Four horse accumulator. Netted Tim £26,567 in pure profit. He expected a fuss, but the cheque was slid across the counter with a slight nod of admiration. It wasn't even a big win, just enough to keep him going. Wait until Frankie Dettori rode severn winners at Ascot.

That night he took Cleo down to the lake and told her everything. She listened with bulging eyeballs and squeaks of childish horror. He begged her to elope with him. He swore to her and to himself not to lay a finger on her until she was both of legal age and ready, but he had a chance to change a life and it didn't take a lot of convincing. Besides, what choice did she have? If she waited around at home, future Cleo would only warp into her body and take over.

They ran as far as Canada. She finished school, he lied about his age and studied business at college. He made a cool £250,000 sneaking back into Britain for a one off bet on Frankie's Magnificent Seven and they lived twenty happy years together in the suburbs of Calgary. And then the rupture happened as before and they had come this way via San Francisco to find a safe place for them and their family to live out their years. I introduced them to the Venice Initiative. They find new homes for dispossessed people in obscure backwaters of the new worlds and the family sailed on board the RMS Steinbeck last week.

I found her too. That first version of Cleo. The irony is that she's much happier with Tim not knowing what happened to her. She could never undo what had been done but she did have a chance at a second life. Like Tim she made money fast and took the man who looked like him to live in New Zealand and raised three beautiful kids. She could never look at this Tim with resentment, because he knew nothing of what had happened. It wasn't his fault, the fault was with that other Tim. A conceit, but a useful one. And with it she lived a kind of happily ever after. 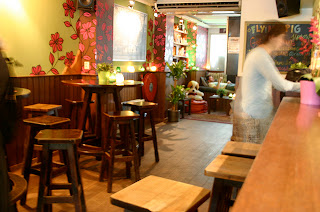