"The other goat, the scapegoat chosen by lot to be sent away, will be kept alive, standing before the Lord. When it is sent away to Azazel in the wilderness, the people will be purified and made right with the Lord."

It seems to me that many of the obstacles we human beings face vis-a-vis work, family, relationships, politics, religion etc., are really the result of our failure to accept responsibility for our own actions. After all, why admit and own your mistakes, experiencing personal growth as a result, when it is much easier to blame your failures on the actions of others? Yet if we never take responsibility for our actions, then there is little, realistically, that we can ever do to affect their consequences for the future. Like the man said, those who fail to learn from the mistakes of the past are doomed forever to repeat them.

Ironically, this is not entirely our fault, but learned behaviour that we been taught since year dot: Woman brought sin into the world, the Jews killed Jesus, immigrants are stealing your jobs. Society's scapegoats are all around us. Then, society shirks its responsibilities like no-one else. Scapegoats provide an endpoint under which all unpleasant truths can be buried. Drug users causes crime, but few dare ask what causes drug use, because then the answer generally comes back as poverty. Drugs are the individual's problem, but poverty is societal, so society takes drug use as its terminus, rather than be in anyway implicated in the inequalities that its poverty perpetuates.

We each trace our problems back until we find a comforting version of reality and then rest on our laurels. By which I mean that we stagnate. When we nominate something as the avatar of all our personal misfortune, we give that avatar immense power over us. For instance, if you consider certain words or images to be blasphemous or profane, then all that anyone else has to do to exert influence over is you is to use those words or images in your presence. No wonder so many people around the world burn the American flag, when it is the only form of retaliation that they have against the ubiquity of US invasion and airstrikes. Why bother with a Predator drone, when you can wound millions of patriotic Americans with little more high-tech equipment than a 50 cent lighter?

The problem with blaming anything on any class of people (women, men, Jews, Muslims, the poor, the young etc.) is that there will always be more of them than there are of you. It's a simple physics problem: a large mass exerts a greater force upon a smaller object than the smaller object does on the larger, proportional to the difference in their two masses. If you're one person seeing a particular demographic of a million or more as preventing you from finding work, then you're never going to find work. Not because of those million others, but from that single malfunctioning thought in your head that has you beat before you even try.

Even worse is what our prejudices tell others about our inner-lives. Most blame and scapegoating is the externalisation of personal faults. If you want to know about a person's personal fears and anxieties, take a look at what they blame on others. Politicians demonise those on benefits, while crying poor and claiming expenses (politicians should be means tested the same as everyone else). Homophobic men are scared that gay men will objectify them in the same way that they objectify women. The guy that tells you certain ethnicities smell is usually the one who could himself do with forming a closer relationship to soap and water.

Moreover, the scapgoater will always be more afraid of the scapegoat than the scapegoat is of their persecutor. Hence, American cops are more afraid of unarmed black men than the other way around, presumably because African-Americans have been subjected to the worst indignities that white America has to offer for 240 years in a row, and they have endured. Like the homophobic man, the racist is ultimately afraid that they will be in treated in the same way that they have treated their victims. For the same reason, heavily armed Israeli settlers, with the full financial and military backing of the government of the United States of America behind them, lose their minds at the sight of a few Palestinian kids throwing rocks. The downside to loading all of your fears onto the shoulders of others is that you tend to become mortally afraid of them out of all proportion to their actual dangerousness. "When you stare into the abyss," as Nietzsche reminds us, "the abyss also stares into you."

Inversely, lack of personal responsibility also leads people to take credit for things in which they had little or no involvement. Look at the British attitude to the Second World War. To listen to people in this country, you'd think Britain defeated Nazi Germany all on its own. Yet 80% of Hitler's forces were defeated by the Red Army, at the cost of twenty million Russian lives. More Soviet troops died at Stalingrad than Britain and America lost during the entire war combined, and it was still only the second biggest loss of life that the Russians suffered (750,000 at Stalingrad, 850,000 at Leningrad). Most of us alive today would not be here without them.

Indeed, if western society was half as civilised as it likes to think it is, you'd think we'd spend as much time commemorating the lives of people that we have killed as we do our own sacrifices. We hold silent vigils to remember the Somme, D-Day, 9/11, but when do we ever fall silent for the victims of Fallujah, Dresden, or the Irish and Indian famines of the nineteenth century that left millions dead thanks to British governmental indifference? The need to shirk our responsibility leads us to dismiss these fallen as enemies that deserve no respect or remembrance, even when they have become our enemy through no fault of their own. We celebrate Olympic victories, Shakespeare's birth, and great British inventions like the world wide web, but when do we ever bear responsibility for Britain's part in the eradication of the hundred million people that lived in the Americas, before Europeans arrived with their guns and their disease? This is not an attitude worthy of a civilised society. A shirker treats other people as they have treated others. The responsible person treats others as they would like to be treated themselves. This is why I could never believe in the death penalty. Isn't one murderer enough? Why should the rest of us become implicated in the crime?

For Britain, Hitler is the ultimate endpoint to negate all else. Hitler killed eight million people, but he's dead now, so you don't need to worry about people like him anymore. That way you can forget that it took thousands of ordinary people to perpetrate the horrors of the Holocaust (and definitely forget about any assistance the Nazis may have received from the IBM corporation). It allows us to sweep all other colonial atrocities under the tiger skin rug, as well as deferring, indefinitely, any discussion about how Stalin virtually defeated Hitler single-handedly, having already killed twenty million of his own people, and what this tells us about the convenient view of the Second World War as a battle of good versus evil. Hitler is also a convenient endpoint because he is just about the only one of the various genocidal maniacs to besmirch the 20th century that Britain didn't support at any point.

I am bound to say at this point, because there are many sensitive and fragile souls that shatter into a thousand pieces whenever anyone expresses an opinion in any way divergent from their own (see Polyphemus and the Myths of Monomania), that of course I am not belittling anything that happened back then. Both my grandfathers fought with distinction in the war. What I am saying is that they had pretty much wrapped it all up 28 years before I was even born. I therefore find it hard to claim any credit for the result, any more than I can claim to be a Petty Officer, just because my dad served in the navy. These are events that occurred independent of my existence. A football crowd may conceivably alter the course of a football match. Claiming credit for something that you didn't bear witness to, and over which you exerted no influence, is tantamount to theft. Or hypocrisy. Either way, the result is unpleasant.

Which only leaves the individual, struggling to make sense of the world. One way is to make others bear the burden for one's mistakes, which only leads to increased feelings of nausea and impotence. Another approach is to recognise that most of what happens in the human sphere of existence is an admixture of judgement and luck. There is little to be done about bad luck. Ill-judgement, on the other hand, can be mitigated against, but it requires the honest assessment of past liability in order to be successful. The most futile lie is the one that we tell to ourselves. A fault can only be corrected if it has been traced back to its proper source. If the source is misidentified, the item will continue to malfunction. 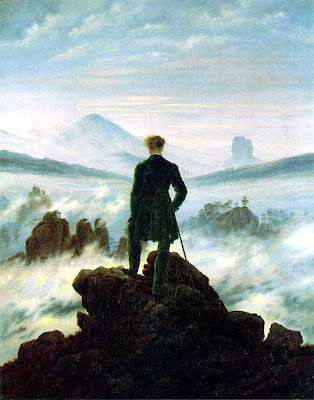