The Adventure of Crow Crag: Withnail & I as Homes and Watson

Recently, I sat down to watch a double bill of The Big Lebowski and Withnail & I on my home cinema system (a laptop, plugged into a projector, plugged into a hi-fi system). The connection between the two films might not be immediately apparent. However, as The Big Lebowski is said to be loosely based on Raymond Chandler's novel, The Big Sleep, so Withnail & I can be seen as the misadventures of Sherlock Holmes and John. H Watson.

It should first be said that The Big Lebowski is based on the series of Philip Marlowe novels, rather than any particular book. The only real connection between the plots of The Big Sleep and The Big Lebowski is that the Dude and Marlowe are both followed, but for different reasons. The explanation that the "fellow shamus" gives to the Dude is taken from The Little Sister. The sequence where the Dude is drugged, thrown into the road, and ends up in front of the Chief of Police in Malibu is straight out of Farewell My Lovely.

The Big Lebowski also owes more than a little to Dashiell Hammett's novel and film, The Maltese Falcon; but then Chandler used Sam Spade as his model for Philip Marlowe. Both PIs were played to smouldering effect by Humphrey Bogart in the 1940s. As much as the Dude is meant to be the stoner Marlowe, making a number of erroneous deductions during the course of the film, he is as much the stoner Bogart, retaining the same acerbic wit and stubborn refusal to give a straight answer to any question. And you know what they say about not Bogarting that joint.

By the same token, Withnail and I are the drunk Holmes and Watson. There is Withnail, the rude, high-functioning, borderline sociopath, with a love for acting and the overly dramatic. Then there is "I" (Peter: Withnail refers to him as such when they're at Monty's). He is Boswell to Withnail's Johnson, faithfully recording his friend's slow decent into psychosis.

The pair go off into the English countryside, a feature of many a Holmes adventure, especially The Hound of the Baskervilles. At Crow Crag (the cottage in which they stay), the most dangerous beast to affront Withnail & I is the farmer's randy bull. Although, of course, the randy bull foreshadows the appearance of Monty in the night. Like Monty, the bull ignores Withnail, going straight for Peter. With his unwanted amorous attentions, Monty is the real hound here.

With a quick blast of All Along the Watchtower, Withnail & I leave the London of 1969 for a Cumbria that could be 1869 if not for the farmer's tractor. There are rambles out on the moor and encounters with local types in the public house. Like the Dude, Withnail & I make a number of dubious deductions along the way. That Jake is out to get them. That Monty breaking in at night is Jake coming to kill them. The proper way to cook a chicken. Peter's paranoia that Withnail is planning to sell him out to Monty, however, is well founded, leading to a final showdown with the hound in the dead of night. The beast is slain with several shots to the heart, and Withnail & I return to the capital and Camden, just on the other side of Regent's Park from 221B Baker Street.

Now, I'm not for one moment suggesting that Bruce Robinson, in writing Withnail & I, deliberately set out to write a comedy based on the adventures of Holmes and Watson. The high-functioning detective and his faithful companion is a common trope in thriller writing. It has been used time and again by crime writers since the time the Holmes stories were first published. Conan-Doyle modeled Holmes closely on Edgar Allen Poe's detective, Dupin, and his bespoke biographer, who unlike Watson remains nameless. The Dude has Walter, even Sam Spade has Miles Archer, at least until the end of the first act. The only real lone wolf is Philip Marlowe, steadfastly singular and alone, telling it like it is, straight from the horse's mouth, rather than through an intermediary. I think that's the reason why I love Marlowe best of all.

Few films end as poignantly as Withnail & I, with Withnail quoting Hamlet in the rain (Act II, Scene II, 278-292). The poignancy is redoubled if you're familiar with the lines and know that Withnail's rendition is far from perfect. He misses out bits of the speech and muddles others. Withnail has ambitions to play the Dane, but understudying Konstantin is probably a stretch for him at this point.

As Watson leaves 221B Baker Street to marry Mary Morstan at the end of The Sign of Four, so Peter leaves London to play the lead in a play up north. As Withnail stands, misquoting Shakespeare in the rain, you fear for him, because you know he will most likely end up as one of the "wankers on the site" that he derided at the beginning of the film. Much as we enjoy watching his antics, Withnail is not Marlowe: Neither is he Holmes. There will be no be no bee hives, or retirement to the Sussex downs for Withnail. Only oblivion awaits. 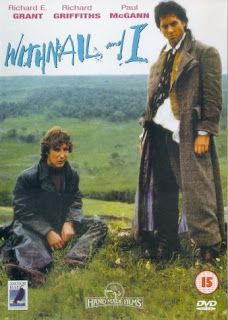 Email ThisBlogThis!Share to TwitterShare to FacebookShare to Pinterest
Labels: 2016, Raymond Chandler, The Big Lebowski, The Big Sleep, The Maltese Falcon, Withnail & I