Last week Jeremy Corbyn was re-elected leader of the Labour Party. Few in the media rate his chances of winning a general election, which is the sole objective of politics in a system of elective representation. It is also the antithesis of anything approaching actual democracy.

Now, before we go any further, I should declare my allegiances. I am a member of the Green Party. I don't necessarily believe in everything that the Green Party stands for, but I do believe that in a system of elective representation, where the only choice is to which pre-approved candidate you hand over your decision making proxy, the only power that a citizen can reasonably exert is to vote out the current government. And then vote out the government that replaces them. And the one that replaces them. And keep voting them out until we get an administration that we actually like. I vote Green because they are the party at the furthest remove from the mainstream parties (without actually becoming deranged) and so furthest removed from the homogenous Lib-Lab-Con hive-mind. Power corrupts, but Westminster corrupts absolutely. When the Greens get in, I'll probably vote them out too.

I despise the Tories as much as the next person (I grew up with a soul in the 1980s), but I think I despise the Labour Party just that little bit more. Hating a Tory is like hating a shark for doing what is in its nature to do. Under Tony Blair, the Labour Party expended great energy telling the British public how dangerous sharks were, how they needed to be protected from sharks, and then gave the contract for constructing shark defences to a consortium of Great Whites. Hospitals and other Private Finance Initiative (PFI) projects signed off under New Labour will end up costing the public purse ten times what would have been spent using only public money. Then, Tony Blair was always a Tory in sheep's clothing. He was so good at being a Tory that one of his dead skin cells became the next Conservative Prime Minster.

What politicians don't seem to have worked out is how angry people are. The governments of the world bailed out the banks involved in the subprime mortgage scandal, failed to bail out any of their victims, and then used the doctrine of Disaster Capitalism (see Naomi Klein's The Shock Doctrine) to asset strip public resources and public finances of anything that is of benefit to the public. People are understandably angry at how even richer the 1% became in making everyone else poorer. When their only form of redress is to occasionally get to vote on something that is ultimately meaningless to them, they are liable to make irrational choices. We saw this in the EU elections of 2009 and 2014, most council elections since the 2008 financial crash, the 2016 EU Referendum and, of course, the election (and re-election) of Jeremy Corbyn to leader of the Labour Party. It's the same reason why Donald Trump is so unaccountably popular, because people are looking for any alternative to the political elites that drove us into this ditch. I suspect that many God-fearing Americans would vote for Lucifer dressed as Rocky Horror's Dr. Frank N. Furter, so long as he wasn't part of the D.C. elite (or a woman, for that matter).

Which brings us back to Jeremy Corbyn. No, he probably can't win a general election, but then Jesus Christ could be leader of the Labour Party at the moment for all the difference it would make. So long as the SNP continue to dominate in Scotland, Labour can't possibly win, because (and here's the thing), England is a Conservative country. Labour may have pockets in London, some strongholds in the north of the country, but the principle colour of England is blue. British media commentators, however, are overwhelmingly on the left, which is what happens when you are successful and well off, and every minute of every day isn't a constant battle to survive. It's easy to be liberal when you don't view every other human being else as a potential rival.

The media also tends to be a self-reflecting surface that can only view the world with reference to its own reflection. Jeremy Corbyn is not a slick media operator like Blair or Cameron and that makes him a bad politician in the eyes of the Westminster media bubble (most of whom have long since succumb to full blown Stockholm Syndrome). I don't really care what Corbyn or any politician has to say. I tend to mute any politician that appears on TV, something I advise everyone to do. It's irrelevant what a politician says, as it's usually empty rhetoric, or a distortion or oversimplification of the truth. By hitting mute, only their body language remains, stripped of any context. Then you get an idea of what the one speaking wants you to think, like being able to filter out a magician's misdirections. A politician should be judged on what they do, not what they say. By this measure, Jeremy Corbyn is doing better than most.

I take my definition of socialism from Bertrand Russell, as modified by George Orwell, as modified by me. Socialism is the belief in three things: freedom of choice, equality of choice, and social justice. If you believe in those three things then you are, I'm sorry to say, a Socialist. At least Jeremy Corbyn is honest about his socialism. I'm still unlikely to vote for him, but less unlikely than any Labour leader in living memory. Which is progress of a kind. I'd have immersed my scrotum in sulphuric acid before I'd have voted for Blair: But then I had Blair pegged as a dangerous narcissist from the moment I became aware of him (and I never get tired of saying, I told you so.)

It is possible to change the world without being in government. If Corbyn's "kinder politics" forces the Tories to adopt more left of centre policies to even give the illusion of possessing some modicum of humanity, then it's a step in the left direction. Where there is little prospect of power, honesty can flow a little more freely. Though the way things have been going of late, the country might yet make Jeremy Corbyn Prime Minister out of mere spite. Now that would be a change. 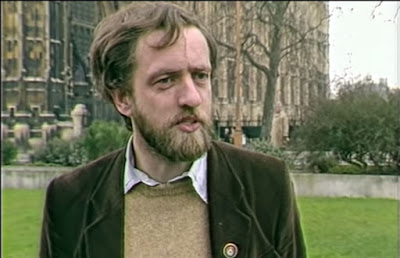