I could never associate the word grunge with Nirvana. The label has its origin in a style of dress (like most musical genres), but the word grunge sounded onomatopoeic to me. So when I sought a sound to fit the ethos of that word, it was a different Seattle band I heard: Alice in Chains. Through Alice in Chains, “grunge” reaches its apotheosis. ‘Dirt’, released in 1992, conjures up everything that that word has to suggest.

Now before we go any further, this needs to be said: The track order on the CD is wrong. On the vinyl release, it went:
Which gives the album a very definite mood. On the UK CD version, ‘Down in a Hole’ is relegated to the penultimate track, creating a different vibe. If you have a copy saved on your computer, do yourself a favour and put ‘Down in Hole’ back where it belongs.

I know I sound like some sad old twat, and I’m ok with that. Making an album, with its peaks and troughs, its light and shade, used to be an art form in itself. With iTunes and mp3s the age of the album release as an event is passing. It’s a great shame, because a well crafted album can take the listener on an introspective journey through themselves. ‘Dirt’ does just this, announcing itself with the up-tempo tracks, ‘Them Bones’ and ‘Dam That River’. Up-tempo in rhythm only that is. The lyrics rarely deviate from the album’s themes of despair and isolation.

And this is where the track listing is important. After the opening salvo, the mood slides on down and ‘Rain When I Day’ and ‘Down in a Hole’ fit together as well as the initial brace of songs. It’s as natural a progression as that from ‘Angry Chair’ to ‘Would?’. Moreover, ‘Down on a Hole’ is the album’s bleeding heart laid bare and it needs to be heard early, before all the shouting starts.

Shouting there is aplenty, what with ‘Angry Chair’ and ‘Junk’ and the manically discordant ‘Sickman’. There is also the forty three second intro to ‘Hate to Feel’, one of the heaviest and most disturbing compositions ever committed to record, largely due to the inclusion of Slayer’s Tom Araya. Even Slayer have yet to quite match it for building unease.

Between the shouting there are grinding riffs and haunting melodies, Layne Stayley’s voice as passionate as ever it was. His much publicised problems with drugs would see him increasingly become a passenger on subsequent albums, with guitarist, Jerry Cantrell, taking lead vocals on ever more songs. Cantrell and Stayley do harmonise together beautifully, but ‘Dirt’ is Layne’s album, his voice focussed and driven, virtually every syllable pregnant with meaning.

“The songs,” Layne once said of Alice in Chains’ lyrics, “are about things that we were thinking... and when you listen to 'em, whatever you think it's about, that's what it's about.” Yet the spectre of narcotic addiction is rarely far away on ‘Dirt’. ‘Junk’ and ‘God Smack’ directly relate to drugs, yet it can be argued that all except ‘Rooster’ (about Cantrell’s father and his experiences in Vietnam) contain the kind of hallucinogenic imagery associated with the most dangerous narcotic substances. Indeed, anti-drugs campaigns would be well served in introducing ‘Dirt’ into schools for dissection and discussion. If only anti-drugs campaigners possessed that kind of imagination.

I remember the day Layne Stayley died. It was a long time coming, but still a shock. His musical career was far too short, but they say the best things come in small packages. Alice in Chains’ influence on rock music is as far reaching as it is underrated. ‘Dirt’ peaked at number 6 in the US charts, but it’s follow up, ‘Jar of Flies’, was the first EP ever to reach number one and remained unique in this regard for a decade. With a new singer and a new album, ‘Black Gives Way To Blue’. Alice in Chains are back with a vengeance. The title track is a tribute to Layne, with Elton John guesting on piano: Such is his enduring influence.

Music at its best makes us feel connected with the universe and to the world in which we live. Before Radiohead took introspective rock to new symphonic heights, Alice in Chains were a huge influence on my life. ‘Dirt’ remains the greatest grunge album ever recorded. For all its dark imagery, it has a surprisingly calming effect. Just make sure you listen to it in the correct order. 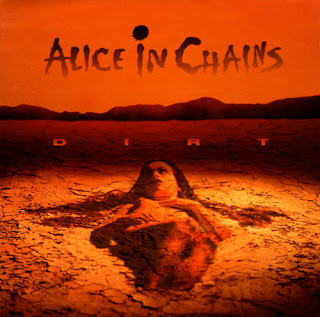