Best Things Ever #8 Roadmaps for the Soul: The Music of Bill Hicks

For Bill Hicks, music and comedy were inseparable. While his early routines were obsessed with how Keith Richards’s continued to walk the earth (“I picture nuclear war and two things surviving: Keith and bugs”), musical references poured out of every comedy gig Hicks ever performed. He walked on stage to Dylan and Hendrix, left it forever to ‘Killing in the Name’, and in between riffed about the music and the musicians that he loved. He also ranted and riled against those he saw as selling out to the establishment, removing them forever from the Artistic Roll Call. I wonder what Bill would make of John Lydon hocking butter? 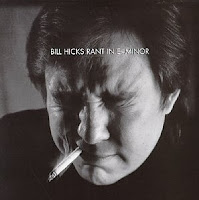 Hicks once joked that his stereo at home was so bad he brought his albums to gigs to listen to them through the PA. “I brought my Dylan tapes... Do you know he sings?” He was glibly known as “the first rock n’ roll comic”, yet it was in rock music that he so often sought role models worth lionising. Hendrix was so good he must have been dropped off by aliens in order to show us the way (I tend to agree). Kiss were a huge early influence, helping to shape his stage persona. Elvis impersonations were also a regular part of his act (coming on for encores in a rhinestone jumpsuit). And then there were The Rolling Stones and ‘Keef’ Richards, a man who had found, “a ledge beyond the edge... There’s a ledge beyond the edge! Who knew? Keith found it. What an explorer.” Through Keef, all the hypocrisy of America’s War on Drugs was focused, “Keith Richards outlived Jim Fixx, the runner and health-nut dude... The plot thickens... Keith Richards is shooting heroin into his eyeballs and still touring, all right? I'm getting mixed signals.”

In routines, Madonna and George Michael were dismissed as “suckers of Satan’s cock” for doing Pepsi commercials. What real artist would do that, he asked. Keith Moon selling Coors? Or, “It’s John Bonham for Certs.” Hocking products was to Bill the ultimate betrayal. “Do a commercial, there’s a price on your head, everything you say is suspect and every word out of your mouth is now like a turd falling into my drink.” What would he have to say about Dylan selling out to the Co-op and Apple? Or, “it’s Keith Richards for Louis Vuitton.” “You know, when I’m done snorting my father’s ashes, I like to stick ‘em in a nice bag.” Actually, he’d probably be too appalled by Iggy Pop’s turn as used car salesman to notice.

Bill could be dismissive of the likes of Judas Priest, yet when the band stood accused of putting backwards messages on their albums, encouraging fans to kill themselves, he could still ask the very reasonable question, what performer wants their audience dead? “I don’t get the long term gain here.” And anyway, anyone who actually played their albums backward was the devil. Music defined his very existence, if it was a choice between having to listen to New Kids on the Block in heaven or good tunes in hell, Bill was “gonna be surfing on the lake of fire rocking out, high fiving Satan every time I pass him on the fucking shore.” Milton could hardly have put it any better. Better to reign in hell indeed.

Yet the musical conflicts on stage were a declaration of the real world battle-lines as Bill saw them. He wanted his artists to play from their hearts, “I don’t care if they died in pools of their own vomit” he screamed. George Michaels (as he called him) should be made to wear a skirt, he was such a girl, whereas Jimi Hendrix was the ultimate male, a man so well endowed he had just strung his cock and played it (“Played it with his teeth, does that make him gay?”). Asked which was his favourite New Kid, he replied, “The first one that dies.” Music was vital, primal, a Cartesian declaration of sentience. Government approved rock n’ roll was mediocre and banal, flaws Hicks equated with fascism: “Fuck that! I want my rocks stars dead. I want them to fucking play with one hand and put a gun in their other fucking hand and go ‘I hope you enjoyed the show’. BANG.”

Of course Bill was also a guitarist himself. Music from Marblehead Johnson, the band he formed with childhood friend Kevin Booth, features on several posthumous albums. This, to paraphrase Douglas Adams, has made a lot people very angry, and been widely regarded as a bad idea, but certainly on ‘Rant in E-Minor’ it works perfectly well. ‘Arizona Bay’ is perhaps a victim of too much experimental editing. People want to hear his comedy in the raw, as it was performed, without musical ornamentation. Which is fine, they can do so on ‘Dangerous’, ‘Relentless’, as well the countless bootleg albums to be found on ebay. Yet it’s also nice to have a couple that are more tributes to the man than verbatim recordings. As Bill himself said, “This isn’t Dylan goes electric, man.”

In death, Bill’s influence on music has endured. He became friends with Tool near the end of his life, once introducing them at the Los Angeles leg of Lollapalooza. The album ‘Aenima’ is dedicated to him, as is the song ‘Eulogy’. Radiohead’s seminal album ‘The Bends’ is likewise dedicated to his memory and Faith No More quoted him in the chorus to their 1995 song, ‘Ricochet’: “It’s always funny until someone gets hurt and then it’s just hilarious.”

With one Hollywood movie in pre-production (what horrors await us?), and a BBC documentary due to be broadcast in October, Bill’s appeal never seems to wane. To the writer he can always be relied on for a quote, like he’s leaning in from behind you to deliver a killer one liner. He had a gift for showing the absurdity, the cruelty of life, yet he never forgot that there was much in which to take joy, especially in the artists he adored. “I know the world sometimes seems like a frightening place,” he said, “but I think we’re going to do ok.” With music to cheer and unite us, how could we not? 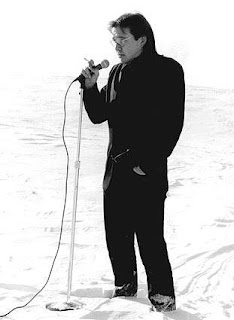