The Legend of Jason and Medea 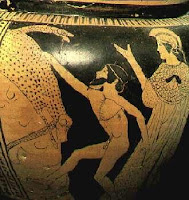 So the story goes (or at least a version of it) that in the land of Magnesia, to the north of Athens and south of Mount Olympus, there was kingdom called Iolcus. King Pelias had usurped his half-brother, Aeson, and taken up the crown. Now Aeson’s wife, who was known by many names, bore him a son. Aeson, knowing of his brother’s fear of a true and rightful heir, told Pelias his son had died at birth, sending him to be raised in the mountains.

Years passed and the King’s reign continued. An oracle warned him, beware of a man entering Iolcus wearing only one sandal, for this man will be your downfall.

And so one afternoon Pelias was in the market place when he spied a stranger among the familiar faces of his subjects. The stranger was tall and handsome, with long flowing locks, dressed in leopard skin and carrying a pair of spears. He wore but a single sandal.

Pelias approached the man and enquired as to his heritage. The man told him that he was a member of the Magnesian tribe, but had been raised by the Centaur, Cheiron, on Mount Pelion. Cheiron had called him Jason, but he had been born Diomedes, son to Aeson and rightful heir to the throne of Iolcus. Pelias held both his tongue and identity.

"Among the holiday makers he watched a remarkable stranger - young and tall and handsome with features that he seemed to recall from a dream, armed with two bronze plated spears. To judge from his close fitting tunic and breeches and leopardskin cape, he was a Magnesian of the leopard fraternity." Robert Graves, The Golden Fleece

Pelias asked Jason what he would do were he to meet a man whom he had been told by an oracle would slay him. Jason replied that he would send this man to Colchis to rescue the Golden Fleece, an impossible task that would seal his fate. There was good reason for him saying this. On his decent down Mount Pelion, Jason had encountered an old women at the banks of a river. She begged strangers to bare her across on their back, but her cries for help went unanswered. Jason offered his services. Unbeknownst to him the old woman was the goddess Hera in disguise. Her great weight bore him down and his sandal was lost in the muddy bank of the river.

Hera had put the idea of the Golden Fleece in Jason’s head, for she had a grudge against Pelias. The king had dishonoured Hera by refusing to make sacrificial offerings at her temple and she was determined to be appeased by his death.

Pelias now revealed himself to be the king. Jason demanded that Pelias make way for his ascension to the throne. Pelias stated that he was weary of power and wished to retire, but there was a curse upon the land which could only be lifted by the retrieval of the Golden Fleece. If Jason could retrieve the fleece for the good of Iolcus, Pelias would relinquish the crown and live out his days in peace. 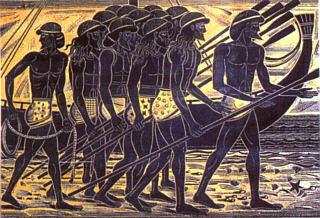 And so Jason recruited the finest crew ever assembled to join him in his quest; the fabled Argonaughts. Counted among their number were Heracles, the strongest man who ever lived, and Orpheus, poet and musical genius, whose lyre could soothe even the most savage of beasts.

Many tales are told of the journey of the Argo and the fates which befell it. There were the women of the isle of Lemnos, who delayed the Argonaughts on their journey for many years and bore them many heirs. And the Clashing or Wandering Rocks, which Captain Jason tricked and navigated, as retold in Homer’s Odyssey. Some even say that Jason spied Odysseus on his way home to his beloved Penelope.

But these obstacles need not delay us, for our heroine awaits us in Colchis, to the East.

"The only vessel that ever sailed and got through, was the famous Argo on her way from the house of Aetes, and she too would have gone against these great rocks, only that Hera piloted her past them for the love she bore to Jason." Homer, The Odyssey 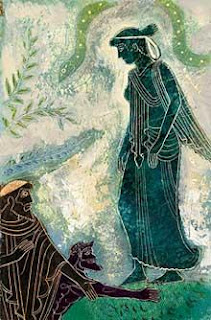 The enchantress Medea bewitched many men in her day. She has entranced many more to retell her tale in the aeons since the forging of her name. Under Hera’s spell, Medea fell helplessly in love with Jason and offered herself to his cause to win the Golden Fleece.

King Aeetes, Medea’s father, challenged Jason to complete three tasks in order to prove himself worthy of the Fleece. First he was to tame and harness a plough to two khalakotauroi, fire breathing bulls, with hooves of bronze, and then to sow a field of dragons teeth. Medea gave Jason a heat resistant ointment to protect him from the bulls’ breath and the creatures were soon tamed. He sewed the dragon’s teeth and from them skeletons grew. These too Medea had shown him how to defeat. He threw a rock into their midst and, being unable to tell from where it came, the skeletons destroyed each other. Jason picked off the last few with one of their own swords.

The Golden Fleece hung from a tree on a hillside. A two headed Hydra stood guard. Some say that Medea gave Jason a potion to spray at the Hydra, others that it was Orpheus who lulled the monster to sleep with his lyre. Either way, the Hydra soon fell into slumber and the Golden Fleece into Jason’s arms. But before the Argonauts could celebrate a famous victory, they were forced to flee for their lives.

King Aeetes suspected trickery and decreed that the Argonauts be captured and put to death. To distract her father, Medea had her brother, Apsyrtus, killed and mutilated and his limbs thrown into the Black Sea. While the weeping King slowed to retrieve the remains of his son from the water, Medea, Jason and the Argonauts made their escape.

"I shall become acquainted with all the art and culture of such cities, and I shall have Jason, for whom I would barter all the wealth the world holds. With him as my husband, men will call me the fortunate favourite of heaven, and my head will touch the stars." Ovid, Metamorphoses

On its return to Iolcus, the Argo stopped at the island of Circe, aunt to Medea, and Medea cleansed herself of her brother’s death. The Argo rowed off and at length returned to home.

Medea, now alone, entered the king’s court, performed many miracles and offered herself in service to the King. Amongst her tricks was to take an old ram, dismember it and boil the remains in a pot. From the pot jumped a young ram and Pelias, sensing the chance to live King Immortal, took the girl as his daughter and doted on the her. Medea’s regal heritage gave her ideal sense to woo a king to his destruction.

The next morning, Jason arrived with his Argonauts, proudly displaying the Golden Fleece and demanded the throne. But Pelias betrayed him. Jason and his crew were imprisoned and the king held aloft the Golden Fleece from the battlements for all to see. The people praised him in gratitude. Now will the crops grow, no will the rains come. But Medea told the king that if he wished to reign for a thousand years, his daughters must cut his body to pieces and boil it that a reborn king may, as the phoenix, arise anew. 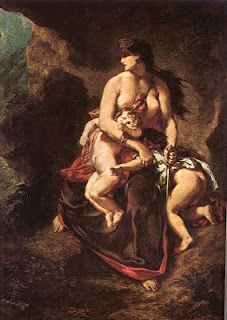 The daughters hacked their screaming father to pieces and while they preyed over his boiling remains, Medea took the king’s keys and rescued Jason from the dungeon. The Argonauts would be safe. Jason and Medea however would not.

They fled to Corinth, where Medea bore Jason two sons. However, he forged a friendship with Creon, king of Corinth, and the king persuaded Jason to leave Medea for his daughter, Glauce, and so be heir to his kingdom.
Enraged, Medea sent Glauce a poisoned robe, which killed her the instant it touched her shoulders. She then killed the king by a bewitched crown. Finally, Medea slew her own children in a rage and preyed to her grandfather, Helios, the sun god, to rescue her. Helios sent his own chariot, which draws the sun across the sky, to carry his granddaughter to safety.

Now she faced Jason. He swore revenge, but Medea prophesised that they would never meet again. She rose into the night, the corpses of her slain children at her feet, that Jason may not even perform the rites of burial.

"Medea [to Jason]: You grieve too soon. Old age is coming." Medea, Euripides

There are many versions of what happened next. Some say Medea fled to Athens and became mistress to the king, baring him a son, Medus. One day, the young Theseus came in search of his father. Only Medea recognised him and, fearing for her son’s claim to the throne, she convinced Aegus that the boy was dangerous. The king brought Theseus to the palace and gave him a cup of poisoned wine, but at the last possible moment he recognised the sword Theseus wore as the same he had given to the boy’s mother . Aegus embraced Theseus as his son. Medea took Medus and fled home to Colchis.

Not much is known of what happened to Medea upon her return. It is said that she never died, her grandfather descended from the heavens and carried her to the Elysian Fields. She is said to have married Achilles and resides with him still, having finally found a man worthy of her.

And what of Jason? Well he lived out his miserable days in Corinth and was killed one day when a falling beam from the aging Argo crushed him to death. But he never forgot what it is to be revenged by a woman scorned. 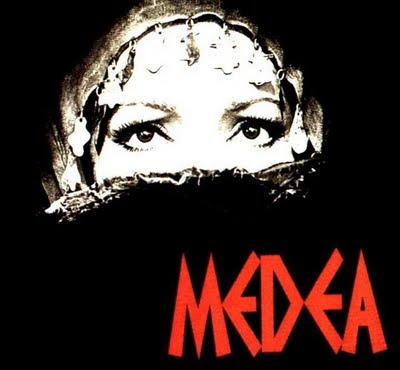