Best Things Ever #7 The Thick Of It/In The Loop

“Authority, though it err like others,
Hath yet a kind of medicine in itself
That skins the vice o' the top.”
Measure for Measure

As with nearly all that have gone before it, Armando Ianucci’s sublime political satire, ‘The Thick of It’, has been accused by politicians of adding to the general level of cynicism towards politics. It’s like Simon Cowell calling you a wanker. Or blaming your reflection for its ugliness. For centuries there has been a fine tradition of satirising politicians in this country, because at all times they have been greedy, venal, and entirely motivated by self interest. Human in fact. Indeed, behind the satire lies the simple observation that aside from the occasional Einstein or Da Vinci, human beings are in fact crap. ‘The Thick Of It’ films them in their natural environment.

The first episode typifies the show’s focus. Hugh Abbott, Government Minister for the fictional, ‘Department of Social Affairs’, ill-advisedly announces a new benefit fraud snooper squad, believing he has the approval of the Prime Minister. Abbott is ordered to kill the story and his advisers put it about that it was entirely the invention of a disgruntled civil servant. At the official launch, having failed to come up with an alternate policy, Abbott gives a press conference “so boring that none of the papers will even touch it.” But when the Prime Minister inadvertently makes reference to the snooper squad, Abbott and his team have to blitz the night desks and convince the media that they had in fact made an announcement earlier that day. The story of the disgruntled civil servant is blamed on a disgruntled civil servant.

Circling around this farce is the Prime Minister’s Press Co-ordinator, Malcolm Tucker, chillingly played by Peter Calpaldi. Malcolm appears out of nowhere, even in open-plan offices1, bollocking everyone in an invective as poetically offensive as it is hysterical (“If you do think about running with this pill story I will personally fucking eviscerate you, right? I mean I don’t have your education, I don’t know what that means, but I’ll start with ripping your cock off and I’ll busk it from there.”). Malcolm is ‘The Thick of It’s dark heart, manipulating the press, spreading dirt on rivals, even spinning against his own Prime Minister when it suits his Machiavellian purposes. Malcolm spends most of one episode trying to kill an embarrassing story about Abbott only to have it bumped to the top of the One O’Clock News when an even more unwelcome story threatens to break.

This is ‘Yes Minister’ for the 24 hour rolling news age (New Labour, New Satire). Yet unlike Yes Minister, where Jim Hacker occasionally got one over his Permanent Private Secretary, Sir Humphrey Appleby, Tucker always get his way. Yes, this is a cynical interpretation of British politics, but it is set against the political landscape of the last decade: A decade which has seen Britain embroiled in one illegal war in Iraq, as well as two equally dodgy ‘conflicts’ in Kosovo and Afghanistan. It has seen Labour lie repeatedly, maybe even perjuriously, about the Bernie Eccleston affair, about top up fees, about 100,00 displaced Kosovans, about WMD and 45 minutes, about rendition flights, about the opposition, about no return to Boom and Bust, and finally (though perhaps more forgivably) about the top rate of tax. Cynical does not even begin to describe how I feel.

Chris Langham’s tenure as the minister came to an end following his arrest for downloading child pornography, although Hugh Abbott was still referred to in two subsequent one hour specials, ‘The Rise of the Nutters’ and ‘Spinner and Losers’. Following his conviction, it has been confirmed that Langham will not return for the new series. Ironically, your perception of his character little changes. If anything it makes Langham’s performance more convincing.

In reviewing the big screen spin-off, ‘In The Loop’, former Conservative politician Michael Portillo summarily dismissed its significance. Portillo’s reasoning was that as this was a film ostensibly about the invasion of Iraq2, it was already six years out of date. “Why don’t they still make films about the Second World War then?” he seriously asked, conveniently forgetting ‘Flags of our Fathers’, ‘Letters From Iwo Jima’ and ‘Valkyrie’. Anyone would think that a politician had never lied about the reasons for war before, as if Iraq was a one off and can therefore be posted down the memory hole. Politicians have always lied about the reasons for war. Even World War Two was sold as a battle for freedom and democracy, rather than the fight for the survival of the unfree, undemocratic British Empire that it was. Even then, given the holocaust, the twenty million Russian dead, the atom bomb, and the setting of the Empire’s sun, it can hardly be viewed as anything other than a Pyrrhic victory.

Portillo’s disingenuous performance did however throw light on the source of our cynicism. It is precisely because we have seen all this before. After all, the last time Portillo and his colleagues were in power they weren’t aversed to lying about the occasional war; training the occasional genocidal regime; bombing the occasional North African country for something it didn’t do. Never forget that one month after the Halabja gassings in 1988, the Conservative Government had two back benchers in Baghdad pledging more aid to their old buddy Saddam. Given its years of collusion, the Tory Party should be disqualified from having a policy on Iraq. 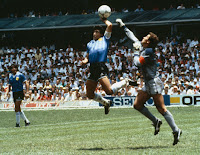 Meet the new boss. Same as the old boss. Only Alistair Campbell could trump Portillo on affected indifference towards ‘In The Loop’. Tony Blair’s former Director of Communications dismissed the film as being “too boring” to be personally offensive. But then when it comes to Iraq, Campbell is like Diego Maradona confronted with a still from ‘The Hand of God’ incident. The image clearly shows his hand against leather, yet still he lacks the courage or the good grace to confess his sins.

Campbell’s demeanour was as threadbare as his attempts to build a pro-war consensus. Beneath the surface it was clear he was seething. Or maybe he was pissed because Campbell’s on-screen persona, Malcolm Tucker, actually manages to get a UN Resolution passed. You see, the point isn’t that we went to war in Iraq (in Iraq you notice, not with Iraq, because that, in the words of Bill Hicks, would imply that two armies were fighting). Nor is it that our elected officials lied about the necessity for war. What the point is is that they did it with such breathtaking incompetence. Despite a certain historical revisionism that is now taking place, very few people were convinced by the Bliar/Campbell exaggerations or half truths. A million people, nearly two percent of the entire population of the country, marched on the streets of London demonstrating against the war. Every poll showed that the majority were against an invasion without a second UN Resolution (for all that was worth). Yet despite overwhelming opposition, British forces invaded nonetheless. It showed us once and for all how New Labour felt about democracy and due process.

Lyndon Johnson was in office when Dylan recorded ‘It's Alright Ma (I'm Only Bleeding)’, which includes the line, “But even the President of the United States sometimes must have to stand naked.” By not naming the incumbent, the song could still receive huge cheers when played during the Watergate scandal ten years later. And again in Sheffield, England 2003, when a certain George W. Bush was in the country (and they say Dylan doesn’t do politics anymore!). As with 'Yes Minister', so with ‘The Thick Of It’, the political parties are never named, we never meet the leaders. This is engine room politics, like that episode of ‘Star Trek: TNG’ seen from the perspective of the junior officers. I can watch ‘Yes Minister’ with a mate who was barely alive in the eighties and he absolutely gets the references, because politics is as cyclical as it is crass. The relevance of Bill Hicks’s comedy goes through cycles roughly equal to sunspot activity for the selfsame reasons. The jokes from the first Iraq War were as funny replayed in Iraq War II (Clone of the Attack). A president feeling vulnerable was still a dangerous thing.

‘The Thick Of It’ is superbly well written, acted and improvised. It is also infinitely quotable (“Come the fuck in or fuck the fuck off. “ “How much fucking shit is there on the menu and what fucking flavour is it?” “I’m left to mop up a hurricane of piss.”). It will be as relevant fifty years from now as it is today. As for ‘In The Loop’, the conspiracy is executed far too expertly to be directly comparable to the farrago that was Iraq. In that regard, it has more in common with World War One, or Vietnam, or the Falklands. The events of 'Dr Strangelove' never came to pass, yet that film remains as darkly funny an examination of the absurdity of war as it was in the 1960s. And like 'Dr Strangelove', ‘In The Loop’ is not about the last war, it is about the next war: It’s about the one that they get away with.

Ultimately, politics is the art of being seen to be doing something, even when you’re doing nothing. If politicians are made uncomfortable by Ianucci’s bleak view of their existence, it is because in the final analysis they are shown to be vacuous and kind of irrelevant. Or as Macbeth so aptly framed it, “’tis a tale told by an idiot. Full of sound and fury: Signifying nothing. “ “Fuckitybye.”

Notes
1 ‘In The Loop’ even sees Malcolm able to suddenly appear on the other side of the Atlantic.
2 Although Tony Blair continues to deny this, despite being shown a video confession made by Armando Ianuccui in the days prior to filming. 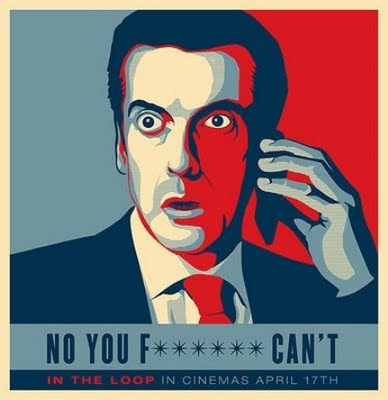 Email ThisBlogThis!Share to TwitterShare to FacebookShare to Pinterest
Labels: Best Things Ever, Bob Dylan, In the Loop, Iraq, Politics, review, The Thick of It