In many of the more relaxed civilisations on the Outer Eastern Rim of the Galaxy, the Hitch Hiker’s Guide has already supplanted the great Encyclopaedia Galactica as the standard repository of all knowledge and wisdom, for though it has many omissions and contains much that is apocryphal, or at least wildly inaccurate, it scores over the older, more pedestrian work in two important respects.

First, it is slightly cheaper; and second, it has the words DON’T PANIC inscribed in large friendly letters on the cover.
Douglas Adams

There was a time, about fifteen years ago, when I started to get panic attacks. I blame this, at least in part, on my best friend. I remember him having a major panic attack while we were in Blackpool and ending up getting a police escort to Blackpool Royal Infirmary, ‘cause he thought he was having a heart attack. We always did things together and if something happened to the one, you could guarantee it would happen to the other one not long after. He had a pregnancy scare with a girlfriend, I had one with mine the following  month. One of my relatives died, one of his died the very next week. So not long after that night in Blackpool, I was visited by my first panic attack. It was not fun.

My first attack came about because I had toothache. Not a prodigious start, but then panic attacks are all in the head. Something physical may trigger the first one, but after you’ve had one panic attack they can be brought on simply by the fear of having an attack. It’s all about the feedback loop. The anxiety of an encroaching attack causes you to physiologically alter your breathing rhythm and this causes the tightening in the chest which ultimately leads to the panic.

It got so bad that for only time in my life I went to see the doctor with a psychological problem. I was lucky to be seen by a doctor who had experienced panic attacks and he talked me through what was happening and gave me some simple meditative techniques to bring them under control, as well as a prescription for Propanol for if I had a bad attack (I think that was the name). Taking Propanol was an interesting experience, because I would still have the attack just the same, I was just less concerned by it, almost like watching myself have a panic attack from outside my body.

One of the worst experiences I had was while stoned, sleeping alone in the back seat of a car on a campsite in Cornwall, the night before the solar eclipse in 1999. I’m a very private person, I may write candidly, but I don’t generally discuss my issues out loud. I don’t want people to know what’s going on in my head most of the time. I was cold and shivering, while the rest of the group was sleeping in the tent, and lack of warmth is one of the quickest ways to accelerate a panic attack. I wanted to cry and scream, but somehow my overriding sense of privacy managed to keep it together, probably thanks to listening to something funny on a Walkman (yes, it was that long ago).

In the end, the eclipse was worth it. I took an extra pill to calm my nerves, which was probably for the best, because there’s something about a solar eclipse which prods at a primal bit of the brain. It’s not natural for it to go dark that quickly and in blocks of increasing blackness. All the sea birds went deathly quiet. We all ran around, shouting, “Black! Black!Black as the night.”

Drugs though, prescription or otherwise, are at best palliative. They don’t make the panic attacks go away, you have to do that for yourself. As someone who eventually mastered them after suffering for a number of years, the best advice I can offer anyone that has regular panic attacks is this: Confront them. Seriously. When you feel an attack coming then in your head or out loud challenge the attack to do its worst. The worst it can do is kill you, so tell it to get on with it or go away. The regularity of panic attacks increase as the feedback loop of worry intensifies, but the feedback works both ways. Every successful challenge is like a dampening force, killing the monster by taking away its power. You won’t beat it right away, but a weary sigh and a bit of bravery whenever you feel the symptoms coming on does work over time. Like much in life, the key to defeating panic attacks is confidence.

I don’t get panic attacks anymore. Panic attacks are a young man’s game. When you get to my age there is so much that might actually kill you that your subconscious stops inventing threats and starts obsessing on which of the real problems it is that will actually kill you. Which isn’t much better. In fact it’s a hell of a lot worse. Ah well, hopefully someone will have cured death before I need worry about it. Death eventually catches up with us all. No point getting in a panic about it. 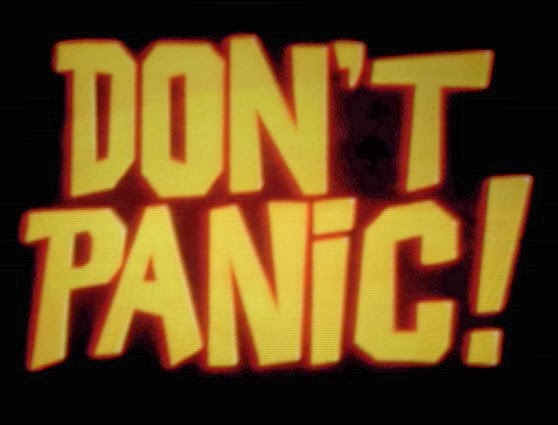