Today's post is the left overs from my story, Cadaver. Originally I was going to write the story from the point of view of a character called Alexander Maximillian Schmidt, but decided to go in a different direction. The ''testament to the eternal folly of the young' to which he refers has already been published this year under 'Youthful Angst', but I have provided the link at the beginning, as well as a link to the published version of Cadaver, which, as you will see, ended up being completely different.

“If anyone should keep a diary it’s me, to aid my memory a little. After awhile if often happens that I completely forget what reasons motivated me to do this or that, not just in bagatelles, but also in taking the most decisive steps.”
Kierkegaard, Either/Or

A new year. Rummaging around in this bone yard that passes for my literary career, I found this; a testament to the eternal folly of the young: optimism. It is quite illuminating to be reminded of a time when one still held out hope for anything. The last of these passages was written just five years ago. My fall since then has been worthy of Milton.

Oh, ok, you’re right, I’m being melodramatic. Me, Alexander Maximillian Schmidt being melodramatic, who could have seen that coming? I blame it all on my ridiculous name. How else can one act with a name like Alexander Maximillian Schmidt? I suppose I should change it really. One day. One day. My motto I fear (note: look up the Latin translation). You see, I suffer from a crippling lethargy, a laziness that is very hard to describe, being not exactly active, but hardly unindustrious. Deep inside, the pistons are whirring, but instead of doing anything with my ideas, I stare at the ceiling for hours on end, lost in ridiculous trains of thought.

Clearly what I need is some kind of outlet, a pressure valve. Well, I used to be a good writer, even at school my English teacher was always complimenting me on my writing style. Not only that, but, well, if you want to hear melodramatic, I thought that maybe if I wrote here, beneath all this youthful optimism, some of it might float down and inspire me to make something with my life. Pathetic, I know. I guess I’ll take what I can get right now.

Remember those pretensions you had to be a writer? An artist? What happened to those dreams? You spent so long avoiding life that you never quite got around to living. Alexander Maximilian Schmidt, what has happened to thee?

It’s not an easy thing to face one’s isolation. To look into the abyss that is one’s life and find nothing here but despair. The evening of the second day of the new year and all I can see ahead of me is another 12 months of the same old misery. New Year’s Eve was spent in the company of my all so much more successful friends, all married with careers and young families and I thought how much less alone I feel when I actually am on my own, sat in this sad little flat, leading the sad life of the misanthrope. It is better this way. I think these days that I only get invited out for events that mean little enough to them to risk my presence: New Year and my birthday that is, otherwise a respectful distance is kept. It is a lonely life being the only single one left, but then they never really approved of my choice when I was with ‘Her’: The Nameless One. Couples see singledom as a disease and they must quarantine all it carriers lest they should become infected. Such is the faith placed in the modern day relationship.

George Orwell once wrote than the artist cannot survive in a dictatorship. For an artist to flourish, he needs the freedom to display his work and discuss his ideas amongst likeminded individuals. Only in a critical environment, where feedback and dissent are allowed, can he thrive, pushing back the boundaries of what is permitted. Under a totalitarian regime all free thought is barred. Discussion takes place underground, in dark, dank cellars, away from the prying eyes of the orthodoxy. And so art withers on the vine and the few braves souls who dare stand up, stand out to challenge the establishment soon find themselves locked away or shot in the back. It can take centuries before the patient cowardice of the mass is overcome by a greater sense of national shame. I maintain that humanity are moles: Secure in the darkness, blinded by the light.

But then, how are you any different? You live in self-imposed exile. You have extracted so much from your life, alcohol and clubs and dancing and karaoke and reality TV and women who were right for you but were rejected for not being enough like those that had come before. You have isolated yourself from all these social norms because you arrogantly declare that they hold for no interest for you. You want something higher, something of real value rather than the cultural dearth that has replaced once noble ideas. You wanted so much to show the world its true face, to hold a mirror up to itself so that it could see how ugly it had become, to be a man of letters and of ideas, a great philosopher or playwright, and yet here you are, alone and worthless, forgotten like the reject that you always knew that you would become, a fate you fell into voluntarily. You were suicidal by five, yet you have always lacked the courage to remove yourself from the gene pool and so you took the next best, least noble option, a life without ambition, a living death, shuffling towards oblivion with a lethargic moan of discontent. So here’s the question that you should be asking yourself Alexander Maximilian Schmidt: Are you prepared to fight the tyranny or meekly pull on a black shirt and join the massed ranks of slaves marching for the world domination of the orthodoxy? It is time to decide which side you are on. 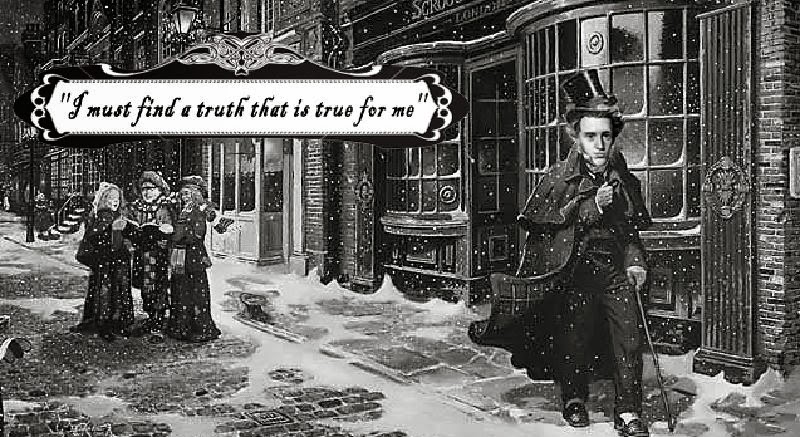