“I set to work at once on your esteemed order and so hard indeed that I almost stupefied myself and stopped, reclining on a sofa and reading Gentlemen Prefer Blondes for three whole days.”
James Joyce, letter to Harriet Shaw Weaver, 8 November 1926

Recently I was rummaging around Oxfam’s second hand book store in Preston (always the highlight for me of any trip to Preston), when I happened across a copy of Anita Loos’s novel, Gentlemen Prefer Blondes.

If people remember the name at all these days it’s likely to be thanks to the 1953 movie starring Marilyn Monroe, yet when the book was published in 1925 it went through forty-five editions before demand started to wane. The second edition alone ran to sixty thousand copies and was snapped up in days.

Gentlemen Prefer Blondes takes the form of the diary of New York socialite, Lorelei Lee, the blonde in question that gentlemen seem to prefer. As Loos tells it in her introduction to the 1963 edition, she was returning from New York to Los Angeles by train with a group of the elite of Hollywood, including Douglas Fairbanks, Senior. There was a blonde girl travelling with the group and Loos could not work out why staff onboard seemed keener to assist this one blonde girl than the darker haired Loos.

Apparently the rather prosaic truth hadn’t occurred to anyone before, that blonde women are generally more popular. From this one incident Loos reflected on all of the blonde girls that she had known in her life and realised the truth. She noticed that even the greatest intellectual minds in America that she knew seemed to fall for ‘the dumbest blonde of all’ (her words) and she presently wrote a sketch which became a series of sketches that appeared in the magazine Harper’s Bazaar, before finally being published as a full blown novel (the first edition sold out on the day it was released).

Edith Wharton called Gentlemen Prefer Blondes ‘the great American novel’, a title that has been given to many novels, especially from that time of prohibition and the Jazz Age. Indeed, in many respects Gentlemen Prefer Blondes is no different than many novels from that time. It’s heroine is a social high flyer, being wined and dined by one American industrialist and English lord after another. She travels to London and Paris and Vienna and home to New York again, always paid for by one of her many gentlemen friends. As Loos notes, if any male writer had written about such things, their efforts would have been met with massive indignation, yet she ‘with my infantile cruelty, have never been able to view even the most impressive human behaviour as anything but foolish’. Lorelei is essentially a gold digger, always scheming for new clothes and diamond tiaras on somebody else’s account, yet Loos’s simple prose style lends her a great deal of sympathy. Besides, most of the men she dupes deserve it.

Gentlemen Prefer Blondes is a short book, a couple of hours is all it takes to get through, which makes James Joyce’s claim to have spent three days reading it rather curious. The introduction notes, ‘James Joyce, who had begun to lose his eyesight, saved his reading for Lorelei Lee’. Which isn’t quite true, as Joyce was reading the book a year after publication. More likely, he was gathering material for Finnegans Wake. Lorelei Lee’s style is one of near perfect grammar and punctuation, but with her own peculiar style of phonetically spelling words, some of which Joyce obviously appropriated. She spells Eiffel Tower, Eyefull Tower for instance, which in the Wake becomes, ‘a skyerscape of a most eyeful hoyth entowerly’ [my italics]. Failing eyesight or not, spending three days reading a two hour novel suggests that Joyce wasn’t merely reading, he was studying in detail.

I haven’t seen the film, but then my film knowledge is woefully lacking. Not a patch on my literary knowledge. Now though I will have to track down a copy to watch, because I imagine there are few actresses more suited to playing Lorelei Lee than Marilyn Monroe. I’ve never engaged in the fascination with Marilyn, but then I’ve never really engaged with  the fascination with blonde women either. Each to their own. I guess this means that I’m not a gentleman. Well all I can say to that is, phew! close call. 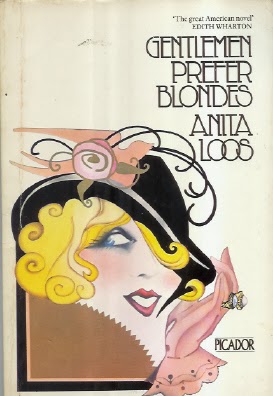