The Community Strikes Back

The Community Strikes Back

The story so far:

It is a dark time for fans of US sitcom, Community. Series creator, Dan Harmon, has been sacked at the end of season 3 and replaced by David Guarascio and Moses Port for season 4. Harmon takes refuge in his podcast, Harmontown.

Although having its moments, Community season 4 is an enormous disappointment, stripping out much of what made the first three seasons exceptional in order to appeal to a broader audience.

Dan Harmon is asked to return to the reins for season 5 and accepts. Now, read on... 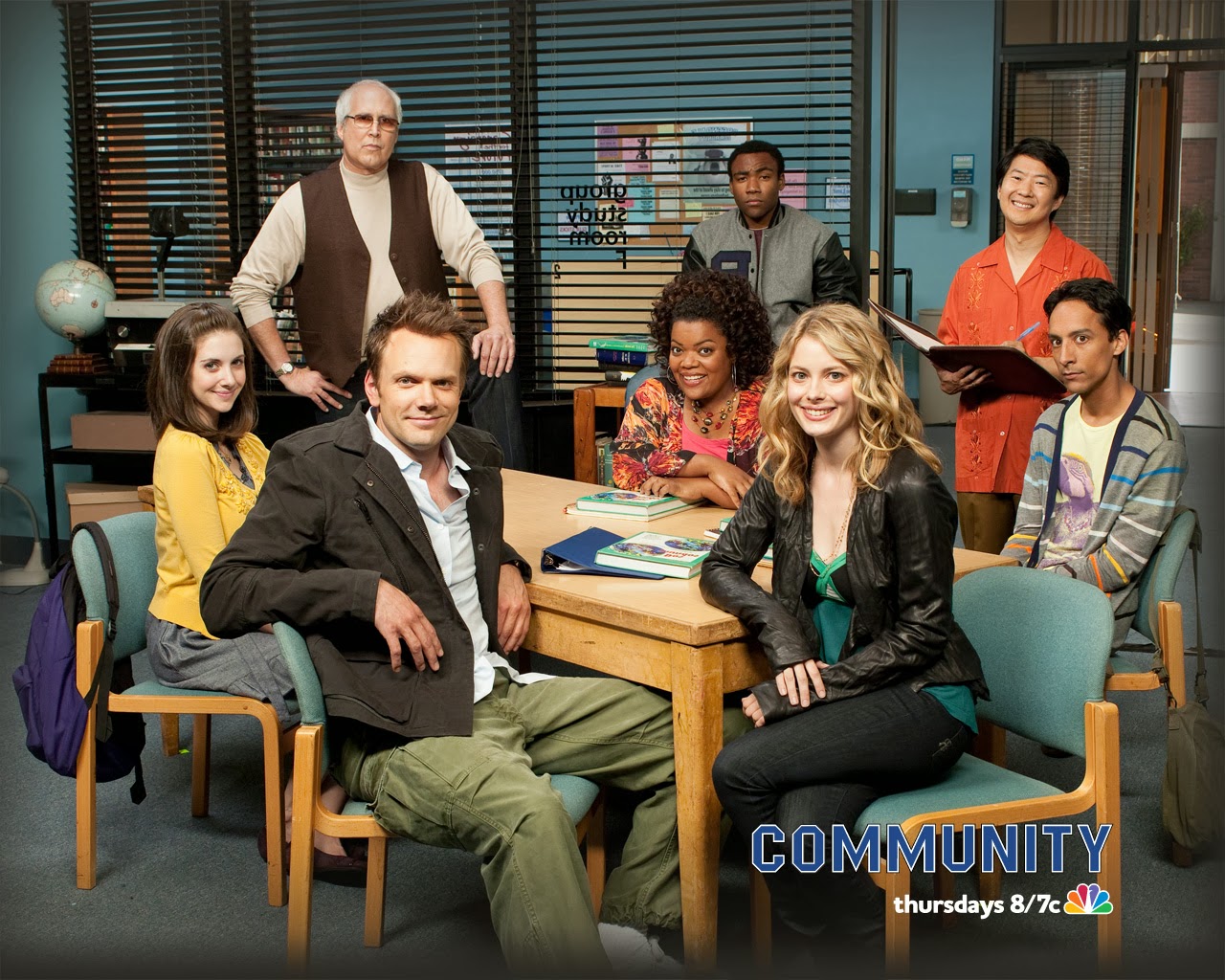 If you haven’t seen Community, what rock have you been living under? Only joking, it’s a line from the show.

In fact, you’re unlikely to have seen Community if you live in the UK as it’s only on Sony Television, a channel so far up the numbers on cable and Sky that you’re likely to lose the will to live trying to find something to watch before you ever get there. However, if you download the extension, Media Hint, or similar to your Chrome or Firefox browser, you can watch episodes new and old on the NBC website.

Community is set in a US community college. Its principal characters are members of a Spanish study group, based on series creator Dan Harmon’s own experiences of taking Spanish lessons at a community college. However, as Harmon himself has stated on his podcast, Harmontown, the setting of any sitcom is largely irrelevant. Good comedy and bad comes from its writing and delivery. The setting is just a construct. Scrubs would have been funny whether it was set in a hospital or on a construction site. The actors in Friends could have delivered their lines as they sky dived, it would still have been dire.

What singles out Community from most other sitcoms is the strength of its writing, its pop culture references and its tolerance to repeated viewing. Because I’m an obsessive ubernerd, I’ve been through the first three seasons four or five times now and still finding things to enjoy. Community’s nearest point of comparison is Simon Pegg and Jessica Hynes’s sitcom, Spaced, which is the highest compliment I can possibly pay the show. Spaced remains the greatest sitcom ever made, even having seen its fourteen episodes countless times since it first aired in 1999. Community though is up there or thereabouts.

The first three seasons of Community run to 71 episodes. It can broadly be regarded as a satire of The Breakfast Club, Glee, Back to School, Real Genius, Animal House and countless other US films and TV shows set in college and high school. Its precedents are Police Squad, Son of the Beach and Scrubs in satirising police procedurals, Bay Watch and medical dramas respectively.  However, Community regularly steps beyond the bounds of its setting to pastiche spaghetti westerns, Star Wars, Dungeons and Dragons, buddy cop movies, court room dramas, zombie movies, Armageddon and Deep Impact, M*A*S*H, Goodfellas, Pulp Fiction and the Star Trek Mirror Universe. There are three episodes in the first two series involving paintball competitions, which owe a debt to the Spaced episode, Battles. It even mocks and shows up the laziness of just about every other American sitcom in living memory by featuring two clips shows that are made up of entirely fresh material.

The study group consists of Jeff Winger, a former lawyer who is studying to replace his fake bachelor’s degree; Britta Perry, a woman who dropped out of high school because she thought it would impress Radiohead (Jeff: You’d be surprised what gets back to those guys.); Shirley Bennett, a divorcee trying to set up her own business, and Pierce Hawthorne, played by Chevy Chase, the heir to a moist towelette empire, who takes classes out of boredom. There’s also Annie Edison, the high school over achiever who lost her scholarship through a pill addiction and Troy Barnes, the high school quarterback that she was secretly in love with. Finally, there’s Abed Nadir, the ubernerd who can only relate to the world in terms of TV and movie references. 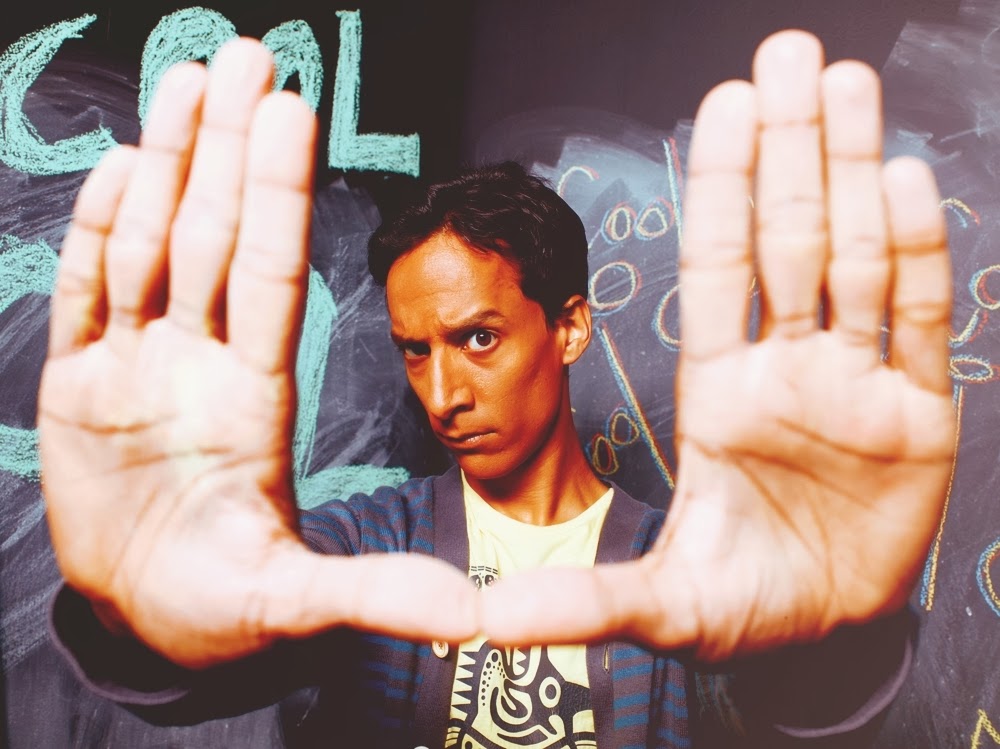 What you come to realise is that the main characters are to one degree or another all extensions of Dan Harmon himself, which largely explains why the fourth season seems like a ship without a captain. Harman has said that Jeff Winger is pretty much a caricature of himself, having joined a study group whilst at community college and gradually came to drop his guard and get know the rest of the group. Jeff is undoubtedly the group’s leader (and manipulator), but the real driving force behind the show is Abed, as much a representation of Harmon as Jeff. Britta’s insane pronunciation of Bagel, Troy’s penchant for ‘butt stuff’ and the surly attitude of Pierce Hawthorne are all parts of Harmon too.

The show has a host of other characters that, as with Scrubs, start out as background scenery, but gradually come to have their own stories to tell. Community has a lot in common with Scrubs, the success of both shows in terms of execution coming from a lack of interference from the network. Scrubs was filmed in an abandoned hospital, meaning they were away from the glare of TV executives and could take more risks. Community’s success, you suspect, came from Harmon’s refusal to do what he was told in order to make the episodes he wanted to make, rarely taking notes from his superiors. It’s what ultimately got him sacked, but the fourth season shows how right he was.

Five episodes into the fifth season and Community is back to something approaching its best (episodes four and five up there with the very best). This season seems to be going down the road that Spaced took in its second series, abandoning pure plot for straight up pastiche of other genres, but that’s not a bad thing. The first episode is called Repilot, deliberately and systematically destroying any trace of the previous season’s incarnation, like the short lived reboot of Scrubs or a Doctor Who regeneration, and moved on to better things. Some characters have gone, some are new, some have returned or achieved greater prominence within the dynamic. The show has been cut back to thirteen episodes a season, but one hopes we get at least one more season out of it (six seasons and a movie). The second season was probably the high point, but season five is shaping up to be as good as the first or third, with a few surprises thrown in for good measure (no spoilers). 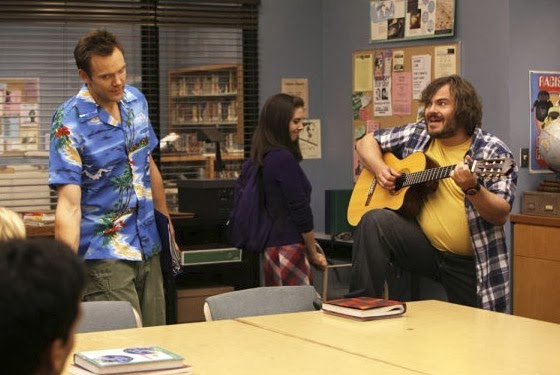 There’s very little other US comedy that I regularly watch these day other than The Big Bang Theory and that’s a very different beast. The Big Bang Theory is basically recycled Friends scripts with the addition of an occasional Star Wars joke (“I'm sorry, but I'm not going to watch the Clone Wars TV series until I've seen the Clone Wars movie. I prefer to let George Lucas disappoint me in the order he intended.”). The Big Bang Theory is my idea of trash TV.  The characters are poorly drawn stereotypes, the humour so broad and telegraphed that you can see each punchline coming from a mile away. Yet I continue to watch it. It’s like that relative that you constantly argue with, but secretly love just the same.

There’s also VEEP, but as that’s written and directed by many of the cast and creators of The Thick of It, I don’t even think of it as a American show (even though it’s cast are all American). The US office became better than the original UK version, but that’s finished. Parks and Recreation is not bad, but it doesn’t always hold my attention.

The Big Bang Theory occasionally makes me snort, but Community is laugh out loud funny. It has no audience or laughter track, which is always a good thing from a country whose studio audiences seem to need to whoop and cheer at everything all the god damm time. Community sometimes drifts into saccharine sentimentality, but Dan Harmon is enough of a evil genius to rein things in before they go too far (see his new Adult Swim cartoon, Rick and Morty, to see just how dark he can be). At such moments, the show’s tongue is usually planted firmly in its cheek, lampooning the sentimentality of the shows that it pastiches.

All in all, it’s good to get back to the Community we love and remember. It was touch and go for a while there. The fourth season had its moments (there’s an Unbreakable homage in one episode that I quite liked), but Community without Dan Harmon was like seeing The Magic Band without Captain Beefheart. Rudderless. It’s a victory for our community over the state.

Email ThisBlogThis!Share to TwitterShare to FacebookShare to Pinterest
Labels: 2014, Captain Beefheart, Comedy, Community, Scrubs, Spaced, The Thick of It, TV