Heaven, Heaven is a Place, A Place Where Nothing, Nothing Ever Happens

In the course of writing this I discovered that David Byrne was born in Dumbarton, about ten miles from where I was born.

Heaven, Heaven is a Place, A Place Where Nothing, Nothing Ever Happens

Excuse me madam, do you have a few minutes to talk about letting the music of Talking Heads into your life? Who are the Talking Heads? That’s an excellent question and I’m very glad you asked. The Talking Heads are a new wave, post punk band from New York that were active in the 1970s and 80s.

Sorry? Yes, that is a long time ago, but anything is contemporary if you’ve only just heard about it. I myself only started properly listening to their music in 2010. Their albums I mean, not just the greatest hits. You’ve heard of Radiohead, right? Well Radiohead are named after a Talking Heads song. Not a very good Talking Heads song if I’m honest, from probably their weakest album, but still pretty cool, hey? Sorry? Yes, I suppose Radiohead are quite old too.

Well I can only speak to what I feel makes Talking Heads so great. They were always innovating, probably ‘cause Brain Eno produced a lot of their albums. Even before they started working with Eno though they were trying things. What other band would be brave enough to feature a steel drum solo on the opening song of their debut album? There’s a lot of Beefheart in that first album. Beefheart. Captain Beefheart? Aw man, you haven’t heard music till you’ve heard Beefheart.

But we’re talking about Talking Heads here. Their music, it’s punk and post-punk, gospel and country, new wave, art rock and straight up pop, with African and Caribbean rhythms and sounds thrown into the mix. They increased the size of the band from their four core members in the middle of their career to create increasingly complicated songs. David Byrne on guitar and vocals, Jerry Harrison on guitar and keyboards, Chris Franz on drums and Tina Weymouth on bass. You don’t think I wouldn’t know that do you? Well, Tina Weymouth was Chris Franz’s girlfriend, still his wife. She started playing bass ‘cause the band couldn’t find a bass player. Amazing bass player. Amazing singer too. Check the Tom Tom Club, Chris and Tina’s side project.

Gotta love David Byrne though. You should YouTube some of their videos, ‘cause David Byrne is what a pop star imagined by David Lynch would look like. Funny looking, funny dancing, but with unbounded energy. Here, I almost forgot, take this, it’s a complimentary copy of Stop Making Sense. Stop Making Sense is Talking Heads concert film from 1984. The greatest concert film ever made. Why? Well, a) because it’s got Talking Heads in it. But b) ‘cause it’s a concept concert film. David Byrne come on stage at the beginning and the stage is all bare and he sings Psycho Killer off of their first album with an acoustic guitar and a back beat. And then Tina comes on bass for Heaven, then Chris for Thank You for Sending Me An Angel and Jerry for Found a Job. Then it’s the rest of the expanded group, Lynn Mabry and Edna Holt on backing vocals, Steve Scales on percussion, Alex Weir on guitar and keyboardist Bernie Worrell. And as the concert goes on, the crew build the set around them, wheeling on bits of kit. It’s the most high concept, high energy film of a rock gig you’ll ever see. It’ll make you a convert to Talking Heads in 90 minutes flat. Does contain some strobe lighting though, so be warned. 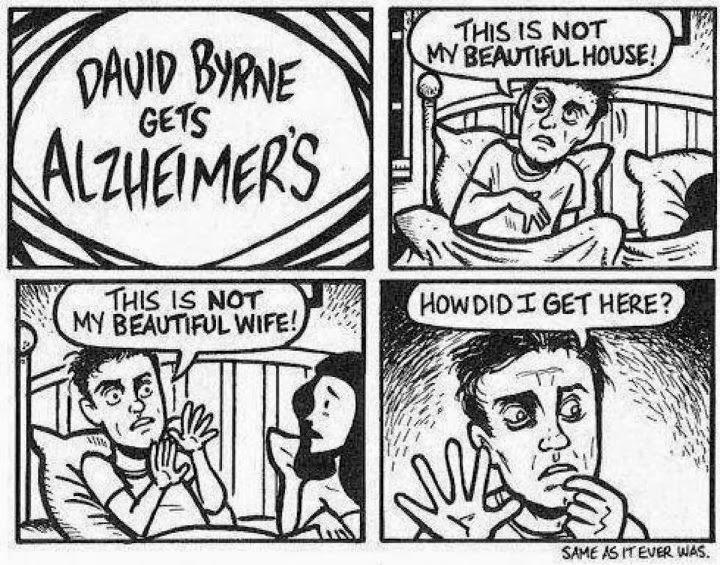 Then there’s their lyrics. Byrne is one of the best lyric writers ever. The best as far as I’m concerned, but I guess I’m biased. Like this, check this out, “Heaven, heaven is a place, a place where nothing, nothing ever happens.” Get it? Well, you see, heaven is supposed to be like paradise where we get everything we want, right. Except, what’s heaven to you might be hell to me. What if you like listening to Justin Bieber or One Direction, that I think are shit? Who gets to be in heaven then? You by listening to that garbage or me by blasting it out of existence with Burning Down the House and New Feeling? So the only way there could be a true heaven is if no one was allowed to do anything, so heaven must be a place where nothing ever happens.


I guess it’s like the idea of God, yeah. God is supposed to be infinite, so he must be infinitely good and infinitely evil, ‘cause good is a type of evil by being the absence of evil and evil is a type of good for same reason. So God or any infinite force would be one that like has no net influence on the universe. Every part of it cancels out every other part. Which is probably why he never speak to us. Except headcases like that Bush guy. And that’s why Talking Heads are brilliant and why David Byrne is a genius.

Or try this one for size, “Judy’s in the bedroom, inventing situations, Bob is on the street today, scouting up locations.” That’s like riffing on Dylan’s Subterranean Homesick Blues, yeah. “Johnny’s in the basement mixing up the medicine, I’m on the pavement, thinking about the government.” Dylan! Bob Dylan. What are they teaching you kids these days? You should totally listen to Life During Wartime, ‘cause it’s about terrorists like we’ve got today, or New Feeling, that’s calling out people stuck living in the past: “It’s not. Yesterday. Anymore.” Sorry? Well I have to disagree with you on that. Don’t think being evangelical about Talking Heads is the same as living in the past.

Some great loves song from Talking Heads. This Must Be the Place (Native Melody) and Uh Oh,  Love Comes to Town. That’s the one with the steel drum on it. Oh, and The Book I Read. Great song.

Seriously, give them a try. Let the joy of Talking Heads into your heart. Sure they sound completely 80s, anything is bound to that has that much keyboard on it. Still, give the concert a watch and if you have any questions, our number is on the back. I am a member of The Church of Native Melody. We are dedicated to preserving Talking Heads music for all time. A contribution would be lovely, but not necessary. That’s quite alright, thanking for allowing to take up so much of your time. You enjoy the rest of you day now. E Glassala Tuffim I Zimbra.