Now, if you were any kind of devotee of my writing (and you’re not, please stop lying to yourself <humour, it’s all good, please relax), you would notice that there is an omission from my occasional series of glibly titled fanboy pieces, ‘Best Things Ever’. #1 deals with Orwell’s ‘Animal Farm’ and #2 with the elixir of life that is tea, but then it jumps to #4 Joyce’s Eveline and #5 ‘Much Ado About Nothing’. What, I don’t here you ask, happened to #3?

#3 was meant to be about the Bob Dylan album, ‘Highway 61 Revisited’, but I got stuck. Back then (and notice I don’t say ‘back in the day’ here, because people who say ‘back in the day’ should be shot through the throat so that they can never say it again), I hadn’t really got the hang of the mechanics of writing and if things didn’t immediately work out the way I wanted, I became disheartened and gave up. Thankfully things are a lot better today. Sort of.

Anyway, at some point I decided to complicate matters and write not just one piece about ‘Highway 61 Revisited’, but two more pieces about the albums which preceded and followed it, ‘Bringing It All Back Home’ and ‘Blonde on Blonde’ , which to me constitute the three greatest albums ever recorded in a row.

Over the next three days, I’m going to publish written pieces relating to each of those albums. Tomorrow, finally, will be unveiled my article on ‘Highway 61 Revisited’ (which is now written), followed by something slightly different relating to ‘Blonde on Blonde’ on Saturday.

For today, I present the one review I actually finished at the time, the one about ‘Bringing It All Back Home’. I’ve left it pretty much as it was written at the time, with some minor edits. It’s not the greatest thing I’ve ever written, but is published here in order to contrast with tomorrow’s much delayed offering. 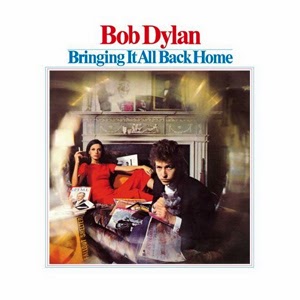 To understand the impact of Bringing It All Home, it has to be seen in context to Dylan’s previous releases. For fans and critics alike, The Freewheelin’ Bob Dylan and especially The Time They Are A Changin’ were proclamations of a generation’s disenfranchisement with the established order. With Blowin’ in the Wind, Masters of War and A Hard Rain’s Gonna Fall; With God on Our Side, Only a Pawn in Their Game and The Lonesome Death of Hattie Carroll, Dylan vocalised what many were thinking and saying . He was seen as spokesman for disaffected youth in America. He was only in his early twenties himself. The issues of racism, inequality and questionable war that had already dominated the 60’s, and which would continue to do so throughout the decade, were all to be found here. And like his hero, Woody Gutherie, a guitar and harmonica were all that Bob Dylan needed to arm himself with.

With his next release, Another Side of Bob Dylan, it appeared that he had all but abandoned social commentary. It was a more light hearted Dylan that emerged. His ability to put a fresh twist on the traditional love song was further illustrated with masterpieces like It Ain’t Me Babe and Spanish Harlem Incident. But the gaps were filled with far jokier tales, interspersed with giggles mid verse. Already he had tired of the presumption that he was somehow the property of the folk and civil rights movements. The chorus of My Back Pages, ‘I was so much older then, I’m younger than that now’, seemed a direct rebuke to that assumption.

It was against this backdrop that Bringing It All Back Home was released. The first two chords of Subterranean Homesick Blues, like the false start of 115 Dream, seemed to issue a warning. I’ll write politicised lyrics, Dylan was saying, but it’s gonna cost you. The first bend of the lead guitar reveals what that price was. The first half of Bringing It All Back Home, Dylan plays with a full band. He’d done so before, but for never more than a track or two.

At the time there was outrage. With the benefit of hindsight, it seems like a small price to pay. A full band added a new dimension to Dylan’s song writing. The title of the album is a reference to The Beatles. Chuck Berry, Elvis and others had popularised rock n’ roll in America, but it had become stale. The Beatles reinvented and returned it across the Atlantic. Their example galvanised Dylan to look again at a style he had toyed with and rejected as a teenager. Now he grabbed it by the scruff of the neck and threw out some of the most important songs ever written. From the surreal and the abstract, to the romantic and bitter, to the anthemic and the empowering, Bringing It All Back Home is a tour de force which has only ever been matched by Dylan himself.

She Belongs To Me and Love Minus Zero/No Limit are love songs of extraordinary beauty and imagery. The former tells of a woman with the power to bend men to her will. She is free and emancipated. In the later, nothing is expected of the lover and yet she exceeds all expectations. Cliched romantic gestures don’t fool her and yet she’s soft and feminine enough to desire intimacy.

Maggie’s Farm is reminiscent of the great socialist novels of John Steinbeck, like The Grapes of Wrath and In Dubious Battle. In Outlaw Blues, Dylan imagines being on some Australian mountain range, foreshadowing his retreat from public life, two years later. The lyric, She’s a brown skinned women, but I love her all the same, must has seemed repulsive to a deeply segregated America.

Side one ends with Bob Dylan’s 115 Dream. Here he is at the height of his creativity. The barriers between past and future;  fiction and reality break down. A melting pot of ideas which mirrors the ethnic mix of the city in which the action takes place. Like his later epics, the lyrics are littered with a cavalcade of characters. Captain Ahab (or Arab) and Columbus, French women and English men. And yet the most hostile reaction the hobo sailor receives is from a house displaying the stars and stripes. Indeed, penetrate the abstract imagery and you find a damming indictment of the hostility and selfishness of American society.

If side one is fact paced and energy packed, then side two is literally the reverse. The rhythm section have departed and Dylan is left all but alone. Four songs, twenty two minutes in length. Mr Tambourine Man, remains a favourite among fans and occasional subscribers alike. The verses seem to stretch on forever, giving a feeling of time standing still. The effect perfectly portrays the sense of being stoned.

In Garden of Eden, the acoustic guitar pounds out cords which accompany lyrics that themselves are like a sledgehammer hitting the words home. And unlike the desolation row of the following album, everybody wants to get into the garden.

My favourite song on the album, probably my favourite Dylan song of all, is It’s Alright Ma (I’m Only Bleeding). Like Subterranean Homesick Blues, it’s lyrics are packed full of life affirming aphorisms:

Old lady judges watch people in pairs, limited in sex they dare, to push fake morals, insult and stare, while money doesn’t talk it swears, obscenity who really cares, propaganda, all is phoney.

It deserves to be played every morning to remind one not to take life to seriously. Given his more recent guise as a salesman for lattes and red wine, perhaps Dylan should be made to listen to it himself on a regular basis. Live, he still plays it regularly. The line, But even the President of the United States sometimes must have to stand naked is always guaranteed to be received by a cheer. The first time I saw him live was the same week that President Dubya was in London and it seemed all the more poignant.

The album ends, as Highway 61 Revisited begins, with a tale of a girl turned vagabond. It could almost be a prequel to Like A Rolling Stone, but whereas the later is heavy with bitterness and sarcasm, It’s All Over Now Baby Blue, is more tender and regretful. A fait accompli, that the narrator wishes wasn’t so.

Dylan had moved on and it was up to his fans to catch him up. He would never entirely abandon the unaccompanied strumming of his first few albums, but from hereon the energy of rock n’ roll would be the last piece in the puzzle. The style that he had developed in isolation meant that when he came to play with a band, he rarely explained to the other musicians what was meant to happen. This is perfectly exemplified in 115 Dream’s false start. It leant an edge to the performances and set the tone for everything that was to follow. In chaos, it seems, genius emerges.