In today's post our hero rails against the iniquity of advertising. 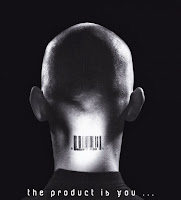 I hate it when people try to sell me shit. I’m also very stubborn. If you ring me trying to hock double glazing or anti-virus software, I will boycott your company forever. Zero tolerance. It’s the only language they understand.

I go out of my way to avoid advertising. I hardly watch anything on television these days that isn’t either on the BBC or recorded for the express purpose of fast forwarding through corporate litter. Even on the rare occasion when I’m forced to watch a commercial channel live, a book and the mute button are on permanent stand-by. Ad breaks are the cosmos telling you that you need to read more.

Even when I go to the cinema, I prefer to go alone these days so not to appear rude when keeping my mp3 player going all the way through the Pearl and Dean bit (a reference which demonstrates how long it’s been since I paid attention to anything before the BBFC certificate).

All of which is fine. With the advent of DVD and Blue Ray, TiVo and Sky+, Netflix and Love Film, it’s very easy to avoid the commercials that clutter traditional mediums. It’s a personal choice for which you aren’t judged.

The same cannot be said online. Here a few pieces of litter, an occasional bad smell, are replaced by something approximating the North Pacific Gyre: Casino pop-ups and five cylinder YouTube pre-ads, with a side order of McDonalds’ offers blinking away out of the corner of your eye, a swirling mass of rotting matter and non-degradable carcinogens that will probably still be broadcasting into inter-stellar space long after we’ve killed every living thing on the planet.

It’s a captive market and if there’s one thing I hate more than people trying to sell me shit, it’s being made to endure them whether I like it or not. I’m stubborn, likesay, which is why I use ad blocking software wherever and whenever I surf the internet. It doesn’t take care of everything, but it does get rid of 95% of pop ups, side ads, even the scheduled, captive breaks enforced by most iplayers. Like hill walking, solid surfaces of earth and stone blocking out the incessant motorway drone. Bliss.

Fast forward through the break on a recorded episode of ‘The Daily Show’ or ‘Game of Thrones’ and you don’t receive passive-aggressive messages from Rupert Murdoch or Richard Branson telling you that  they rely on advertising revenue to make a profit. You frequently here this online though, usually from companies that are already quite big (to name them here would be counter-productive to the point of this article, as would saying which ad jamming software I use).

The usual resolution of the petulant displays is, hey, subscribe to our service and you’ll never see advertising ever again. Which is blackmail. And a declaration of war. Here’s my counter offer: If I don’t know who you’re whoring from then I don’t know which companies to boycott. If you’re going to make me pay attention to the Johns you turn tricks for then you can be certain that I’ll be adding their names to my list. A list I always check twice (yes, just like Santé Claus).

Which isn’t to say I don’t sympathise to a degree. I have, on occasion, been guilt tripped by a scientific journal. Not enough to turn off the software, but enough to empathise with their predicament. Our current economic is unfair, of course it is, any system where Hedge Fund Managers get paid more than doctors, musicians or scientists clearly has skewed priorities. That doesn’t mean we should simply submit to the insanity of it all, but fight back in however small a way.

The true extent of our skewed priorities shine through when you consider our attitude towards athletes. In the general melee that surrounded the build up to the London Games 2012, I noticed that the British tend to treat their athletes the same way they treat their soldiers. Apply a few meaningless epithets and it offsets the need to do anything to actually help them. Call someone a hero and it negates you from the responsibility of financially or emotionally supporting them. Call someone a star, an ambassador, and you need feel no guilt at seeing them selling themselves to some shampoo company to make ends meet. Admire someone’s bravery at sailing single handed around the world and it washes out the bad taste occasioned in the mouth by some DIY company’s gaudy font plastered all over her sails.

There was time, in my youth, that I looked forward to the Olympics, summer and winter alike. Not in many years. To have to sit through endless endorsements for Budweiser, Pepsi, McDonalds and all the other companies that have no place within a thousand miles of a sports stadium is more than I can bare. I think the IOC may be one of the most despicable organisations on the face of the planet. I mean, not only is its defining image, the Olympic torch, something that was introduced by the Nazis in 1936, but spectators are banned from drinking or eating anything not sold on the premises by the usual purveyors of obesity, heart disease and domestic violence. That’s a dictatorship in my book.

The principled corruption of the IOC is symptomatic of our entire culture. On the occasions that I’m flicking past adverts, I usually catch sight of Amazon flogging something. Amazon pay little or no tax in this country, treat their employees like medieval surfs, yet their operations put strain on our transport and energy infrastructures. Power stations brownout, tarmac cracks under the articulated weight and the cost of rebuild and repair is outsourced back to the consumer. Hey, you know the 3 quid you saved on the new John Bishop DVD? Turns out you’ll have to pay it back eventually. Comes with compound interest too.

Personally I think we should ban all adverts, at least at the cinema and on TV, and replace them with government endorsements of the companies that contribute the most in tax during the previous financial quarter. It could be broken down into four tax brackets, with national and multinational companies getting the prime time spots. Smaller and medium sized firms would make up the late night schedule, as they do now, with a handful of the juicier slots decided by lottery. Give smaller firms a chance to grow and compete.

These endorsements would still have a artistic budget and a creative director (the Don Drapers of the world subsumed by the civil service), but advertising exposure would be based upon merit, rather than the aggressive marketing of shit you don’t need.

Tax revenue calculation would be offset by any social and environmental damage caused by the company. If Shell contributed £10billion in taxes but shot its petrochemical load all over the Severn Estuary, then headlines saying what a bunch of polluting douche bags they are should be the only exposure they get until the cleanup has finished. At least then the oil industry might be inspired to actually finish cleaning up, not just until ten seconds after the news crews had packed up and driven away.

You have probably noticed the comparisons of advertising to litter in this article. The simile however is apt. Advertising is the polystyrene container thrown on the floor by the fast food consumer. Except we don’t even get to experience that polyunsaturated, transfat high that Hedge Fund Managers and oil executives experience on a daily basis before the inevitable cocaine-induced heart attack. All we get is a pile of garbage towering over us that we lack the money or resources to have taken away. As consumers, the only thing we consume is the effluent being constantly sprayed all over us from above. Killing us by degrees.

Fight back. Use ad blocking software, use the mute button, use the Pearl and Dean bit to catch up with friends and family. Apathy changes nothing and whilst it might seem like a small step to actively turn away from advertising, it is at least a step in the right direction.