Her Ribbons and Her Bows

I don’t necessarily agree with every word that follows, but I wanted to write a parody of the kind of obsessive fandom that leads people to read far too much into things. Dylan attracts more obsessives than most other artists. You see them up front at gigs, little notebooks in their hands like train spotters, obsessively writing down any deviation to Dylan’s recorded lyrics. I’m not quite that bad, but I do have more books on Dylan than anyone apart from James Joyce and Shakespeare.

Dylan is God, only in that he moves in a mysterious way. And like any religion, the following is more wishful thinking than revealed truth.

Her Ribbons and Her Bows 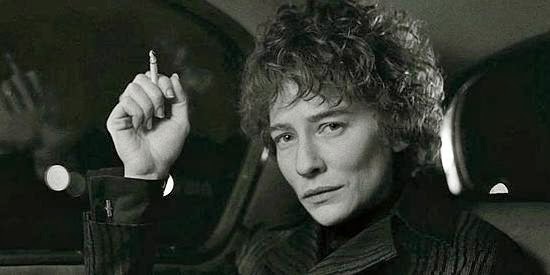 Will: [takes a drag, holds, exhales]: Just Like a Woman, you see, is Dylan waving [waves] bye-bye to his existence on tour. It’s 1966 and he’s at crisis point, strung out on speed, too little sleep and too many tour dates. He’s got a new wife at home and a mercenary manager on his back trying to coin him for every last cent. If you take a look at the footage from that era, he’s thin as a rake (it’s why they get Cate Blanchet to play that version of him in the Todd Haynes film), and he’s giving it all, “I shouldn’t be singing” and “I’m gonna get me a new Bob Dylan and use him, see how long that Bob Dylan lasts.” Dylan wants out. The novelty of people booing him when he first goes electric the year before has become a drag by the time he reaches England. He, he, he’s looking for an out and it comes two months after his return to the States, July 29 1966, when he comes off his motorcycle (deliberate, some say), exaggerates his injuries and retreats into eight years of obscurity at Woodstock. Just Like a Woman foreshadows it all. The crash happens in July and the song comes out in the States in August.

It’s not a misogynist song. Not a misogynist song. Some people to take it to mean, typical woman, but it’s not that. For a start, if you listen to the lyrics, it’s saying that she likes to act all grown up, but she’s fragile like a child. It’s not a chick at all though. It’s him. It’s Dylan. It’s this lifestyle, the touring, the interminable, inane question from the press, the ire of the folk fucks and their cries of “”Fake” and “Judas.” From the outside, it all seems so glamorous, but it takes a lot of foundation to paper over the cracks. “Lately I see her ribbons and her bows have fallen from her curls.” Dylan seems never to have really enjoyed it: “It was raining from the first and I was dying of thirst, so I came in here.” Todd Haynes knows all this, that’s the other reason he gets Cate Blanchet to play Dylan in ’66. Jude Quinn man, Dylan then as he sees himself, trying to hold it all together, slowly coming apart at the seams. That film confuses me. It’s Cate Blanchet, right, who’s fit, but she’s Dylan, who’s, who’s God. Is it ok to fancy God? Is it blasphemous? Can bet there’s a whole website for people who fantasise about boning deities. Holy Fuck. Ha!

Just Like a Woman, though, it’s a Dear John letter to his fans. It’s Dylan telling us we need a break. “Ain’t it clear that I just can’t fit. Yes, I believe it’s time for us to quit.” It’s not misogynistic and it’s not bitter. It’s a pretty tender song, nothing like the bile of Like a Rolling Stone or the two fingered fuck you to the folkies in Positively 4th Street. It’s not forever, he’s saying, but people are going to have to make changes before he comes back. “When we meet again, introduced as friends, please don’t let on that you knew me well. I was hungry and it was your world.” Perhaps he’s right. Going back on tour in ’74 wrecks his first marriage to Sarah Lownds. Though that break up leads to Blood on the Tracks, the greatest break-up album ever recorded, so, y’know, every silver cloud.

Anyway, what’s your kid up to these days? Haven’t seen him in ages...