No preamble, no pissing about, Ladies and Gentlemen...

ruce Springsteen described first hearing the opening snare shot of ‘Like a Rolling Stone’ as sounding “like somebody had kicked open the door to your mind.” The first track on Bob Dylan’s 1965 album, ‘Highway 61 Revisited’, is certainly a powerful statement of intent. That opening salvo expands outwards, like the illuminated initial letter of a medieval manuscript, heralding the arrival of the soon to be sneered opening words, “Once upon a time...” Few other rock n’ roll albums begin so perfectly.

“Once upon a time...” let’s us know exactly where we are. This is myth making country, the land of fairy tales, reinvention and the American Dream. Here do we find jugglers, clowns and mysterious tramps. Napoleon is in rags and the Cheshire Cat has become Siamese. As abstract to the remainder of the album, ‘Like a Rolling Stone’ sets a chain of events in motion that spiral, snowball and roll all the way to the Desolation Row of its final track.

Movement plays a major role in the dynamic of ‘Highway 61 Revisited’. The real Highway 61 runs, or ran, from the Canadian border in the north to New Orleans in the south. Known as the ‘Blues Highway’, it was aptly named. Not only did Bessie Smith die in a car crash on a stretch of the road, but the intersection with Highway 49 is believed to be the mythical crossroads where Robert Johnson  made his legendary pact with the devil. Elvis grew up on a housing project not far away and it was in a motel off the Memphis leg where Martin Luther King Jnr was assassinated in 1968.

Highway 61 also ran past Duluth and Hibbing, two nondescript towns in Minnesota. The former gave birth to Bob Dylan, the later served as his childhood home. To the young Dylan, Highway 61 must have seemed like an escape route, a road to freedom from small town America. In a country where the automobile is king, the highway is a powerful symbol of liberation. ‘Highway 61 Revisited‘ is an album about liberation, with parallels to both Woody Gutherie’s ‘Bound for Glory’ and Kerouac’s ‘On the Road’. 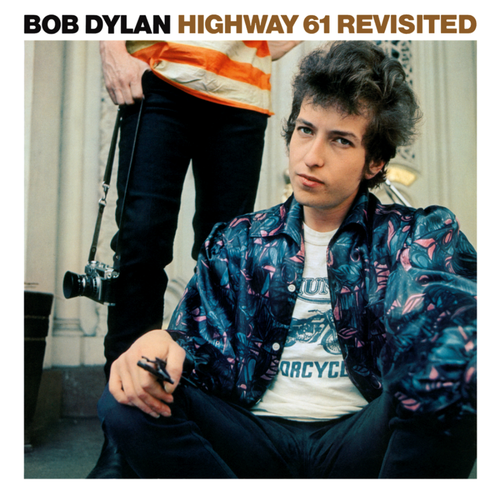 The twin themes of momentum and transience run through the lyrics like tarmac. The action is observed from both Buick 6 and mailtrain. Miss Lonely’s inertia transports her to the gutter like a rolling stone. The lyrics are peppered with sword swallowers, clowns, midgets and myriad circus freaks, the circus being the embodiment of nomadic transience. In the title track, there is but one response to any dilemma: head down to Highway 61. There everything is allowed. There the failures of the past are forgotten.

Much has been made of the comparison between the title track and Wilfred Owen’s, ‘The Parable of the Old Man and the Young’. In his poem, Owen gives a modern retelling of the story of Abraham’s sacrifice of his son to Jehovah. Yet unlike the biblical version, where Jehovah sends an angel to stay Abraham’s hand at the last possible moment, Owen’s version has a very different ending:

But the old man would not so, but slew his son,
And half the seed of Europe, one by one.

‘The Parable of the Old Man and the Young’ is a denunciation of the killing fields of the First World War. The first verse of ‘Highway 61 Revisited’ follows a similar vein:

On March 8th 1965, the United States deployed 3,500 troops to South Vietnam. By December that year, the number had increased to over 200,000. ‘Highway 61 Revisited’ was released on August 30th 1965 and resonates with references to war, past, present and future.

In the final verse of ‘Highway 61 Revisited’, we see the roving gambler trying to create the next world war and finding a promoter to help him. In a country where public opinion is everything, US politicians and the mainstream media have a history of carefully manipulating public perception to promote the benefits of war. Vietnam was the first television war and, contrary to the revisionism practiced by some historical commentators, the American media continued to support the war until it was obvious just how unpopular the conflict had become. Even today, Vietnam is denounced in many quarters not as an invasion that cost the lives of as many as four million Vietnamese, Cambodian and Laotians, where more tons of TNT was dropped than by all sides during World War Two, but as the country’s first defeat.

In ‘Tombstone Blues’, we hear of the king of the Philistines who, ‘fattens the slaves and sends them out to the jungle’. A disproportionate amount of African-Americans, descendants of the slaves, were sent to fight in the jungles of Vietnam. Highway 61 bisects the United States like the civil rights movement that was dividing the country at the tiime. The opening lines of ‘Desolation Row’, “They’re selling postcards of the hanging” recalls the sickening practice of photographing and selling souvenirs of the lynchings of black men, women and children, even in Dylan’s home town. African-Americans could be sent to die for their country, but not to expect anything to have changed when, if, they came home.

‘From A Buick 6’ reads like the tale of someone trying to dodge the draft. He’s being hidden by his girl (could be his ‘mamma’ but given Dylan’s repeated use of the word, seems more likely to refer to a girlfriend). If he should die, his simple request is that she should put a blanket on his bed (again, this could be his mother, repeating a ritual dating back to childhood):

Well, if I go down dyin’, you know she bound to put a blanket on my bed.

The word “bound” in the refrain has a double meaning, like ‘determined’ in Richard III’s, “determined to prove a villain.” The woman bound is obliged to put a blanket on his bed, but there is the doubt that she might forget. The jaunty, blues feel of ‘From A Buick 6’ detracts from the grim imagery. The idea of needing a shovel and a dump truck to deal with the dead puts one in mind of WWII and the extermination camps.

One can compare the whole of ‘Highway 61 Revisited’ to ‘Bob Dylan’s 115th Dream’, a track from the other album he released in ’65, ‘Bringing It All Back Home’. ‘Highway 61 Revisited’ is ‘Bob Dylan’s 115th Dream’ writ large. The walls between fantasy and reality, past, present and future break down. A cavalcade of characters, both real and fictional, swell the lyrics, a kingdom for a stage, with princes (and princesses) to act: Einstein and Galileo, Ma Rainey and Beethoven, Romeo and Ophelia, Paul Revere, Jack the Ripper, Abraham, Cain and Abel, The Phantom of the Opera, The Hunchback of Notre Dame, Ezra Pound and T. S. Eliot, Jack the Ripper, John the Baptist and F. Scott Fitzgerald (not to mention Woody Guthrie, Kerouac and Rimbaud, who haunt the album without ever receiving recognition). By comparison, Dylan’s next album, ‘Blonde on Blonde’, mentions only Shakespeare by name.

Then, ‘Highway 61 Revisited’ is a very different beast even to its immediate predecessor. There are no love songs of the kind to be found on ‘Bringing It All Back Home’. No ‘She Belongs to Me’ or ‘Love Minus Zero/No Limit’. ‘It Takes a Lot to Laugh, It Takes a Train to Cry’ comes closest, but even here our hero is on the run from love (“Don’t my gal look fine, when she’s comin’ after me?). The characters of ‘Highway 61 Revisited’ are all escaping from the past or find themselves in situations not of their own devising: Poverty, skid row, the cops, death, addiction and the draft.

As much transient movement as there is on the album, it is all ultimately futile. The action begins in New York City and it ends in New York City, via Highway 61 and Juarez in Mexico, to form a Dantean circle of hell. The rolling stone that began tumbling during the opening track by the end has come crashing down to Desolation Row. The same note of bitterness which opens proceedings, brings matters to a close:

“Don’t send me no more letters, no, not unless you mail them from Desolation Row.”

In the year of the album’s release, Dylan faced accusations that he had abandoned the protests songs of his folk era for the bright lights of mainstream electric guitar music. While it is true that ‘Highway 61 Revisited’ represents Dylan’s first wholly electric album (excluding the eleven minutes of ‘Desolation Row’), the irony is that the album is one of Dylan’s most politicised works. Sure, it doesn’t contain the sledgehammer subtlety of previous compositions like ‘Masters of War’, ‘With God on Our Side’ or ‘The Lonesome Death of Hattie Carroll’, but politics, gender and race abound on ‘Highway 61 Revisited’.

Dylan had matured as a song writer, become more nuanced, and the harsh black and white texturing of his folk songs just wasn’t going to cut it anymore. With an electric guitar in hand and a band to back him, Dylan broke forth into glorious Technicolor. ‘Highway 61 Revisited’ represents his most vivid composition.