Three Views Upon the Miraculous

Today I try my hand at journalism. Except, it's me, so I couldn't report on anything so ordinary as an actual news item.

The following is how I imagine three news organisations might report on events that form the background to several other stories.

Three Views Upon the Miraculous

Brian Clough 'Comes Back From the Dead'

The late football manager Brian Clough has made an appearance during a game at Nottingham Forrest.

The incident occurred on Saturday during Forrest’s 5-3 win against AFC Bournemouth at the City Ground.

Reactions to the episode were mixed, with fans astounded and exuberant in equal measure – many more appeared simply baffled.

Cameras filming for the BBC’s ‘The Football League Show’ showed Clough sitting in the Brian Clough Stand with Peter Taylor, his assistant until Taylor’s retirement in 1982.

Footage from the ground did not capture how or when Clough and Taylor appeared, but review of television footage appeared to first show the pair early in the second half.

Nottingham Forrest were losing 0-3 at the time, thanks to goals from Lewis Grabban, Brett Pitman and Wes Fogden for AFC Bournemouth.

Clough and Taylor received a standing ovation at the conclusion of the game, which saw Forrest score five late goals, including a hat trick from midfielder Andy Reid.

Stewards and the police were required to escort the men out at the referees final whistle, as fans mobbed around them.

There are reports that the men vanished in the tunnel leading from the stand.

Commentators and fans reacted with amazement to the event.

“My hope is that this signifies an end to people disappearing. That in Britain people don’t disappear, they come back.”

AFC Bournemouth manager Eddie Howe simply exclaimed: “Well what can you say about that?”

Nottingham Forrest manager Billy Davies however gave praise to the club’s former manager and his assistant for their presence: “I think it’s pretty clear that Cloughy and Peter were the 12th and 13th men out there today.”

Menawhile, ForrestFanatic82 tweeted: “OMG, I was sat right behind Cloughy today. Looked like he stepped out of the 70s. Looked like when we beat Malmo in ’79 final.”

In another tweet ForrestFanatic82 said: “He was just there. Not sure when he was there. Maybe from kickoff, but deffo only in 2nd half we noticed him.”

Clough’s reappearance follows months of disappearances across the world, with people vanishing as far afield as Namibia and France.

The first incidents were reported in Israel’s Occupied Territories, but soon spread to encompass much of the Middle East and North Africa.

Initially only occurring at night, the first major daytime disappearance occurred in the Iranian city of Isfahan in August and was caught on film.

The cameraman himself disappeared, his camera seen to come crashing to the floor during the extraordinary footage.

Reports of disappearance events have been slowly spreading north through Europe over the summer.

The first disappearances were reported in Britain on Friday.

Who Was Brian Clough?

Where you at the City Ground? Did you witness the appearance of Brian Clough or Peter Taylor? Contact the BBC Newsdesk or leave your comments in the comments section below.

From other news sites

Clough Returns From Dead To Inspire Forrest to Victory Then Disappears

Brian Clough has made an appearance during a match at Nottingham Forrest’s City Ground, despite having died in 2004.

The Ex-Forrest manager was witnessed in the stand which bears his name early in the second half, along with former assistant, Peter Taylor. Taylor died in 1990.

Nottingham Forrest were 0-3 down at the time, but rallied late on to score five goals in the final thirty minutes. The victory lifts them to sixth place in the Championship.

A cordon of police and stewards was erected around the men as they left the stand, but they promptly vanished in the melee. Sources inside the club told the Guardian that the men had not been seen to disappear.

Cameras for both the BBC and Sky Sports failed to find the exact moment when Clough and Taylor made their appearance, but most people seem to agree that the men were not present as Nottingham Forrest  kicked off the second half.

As well as footage from the BBC and Sky, a number of camera phone videos were uploaded to YouTube and Instagram. They show Clough wearing a green jumper with red collar sticking out and quiffed back hair.

Those who had known and worked with Brian Clough estimated his appearance to be as he looked in his mid-40s. This would equate to the year circa 1980, leading some to speculate that Clough and Taylor briefly travelled forwards in time.

Others have speculated that Clough’s appearance was an elaborate hoax staged by Forrest to lift the morale of players and fans alike, with a number of high profile names including Derren Brown and David Blaine implicated in the conspiracy. However, coming as it does hard upon recent world events, most seemed ready to accept the incident at face value.

Exact figures for the number of people that have disappeared in the world in the last six months remain elusive, but conservative estimates put the number at around 150 million. The disappearance epidemic finally reached British shores on Friday. 153 people were reported missing in and around Norwich, with a further 81 vanishing from Kirkwall in Orkney. The mood in both towns was reported as calm, but troops have been deployed as a cautionary measure, following the rioting seen in other European countries.

The strange appearance of Brain Clough and Peter Taylor at the City Ground Saturday seems to have no precedent. There have been no other reports of people reappearing or returning from the dead elsewhere in the world and some commentators are speculating that events at Nottingham Forrest mark the beginning of the end of the disappearances. Others state that this position is optimistically  premature. The Clough incident could also herald a dark new chapter in the story.

More from the Guardian

Media Scrum Surrounds John Lennon, As America Claims Ignorance of His Assassination
More UK Disappearances in Kent, Essex and York
What Do Global Events Mean for the Futrue?
In Pictures: First UK Disappearances

Football Chiefs admitted to astonishment yesterday as Brian Clough materialised during a Nottingham Forrest match, then vanished on his way out of the ground.

FA Chairman Greg Dyke announced he was launching an investigation into the events at the City Ground after claims of an elaborate hoax.

Controversial ex-Forrest manager Clough, 69 at the time of his death in 2004, appeared to appear during his former team’s Championship game with AFC Bournemouth.

Forrest trailed 0-3 at the time, but scored 5 times following Clough’s guest appearance, leading to accusations of cheating by Bournemouth.

Dyke, 66, said: “I think we need to get to the bottom of this. Either something quite miraculous happened in Nottingham today or there has been an attempt to deceive fans.”

“We need to conduct a quick investigation so that the football going public can have confidence they are not being cheated.”

The Mirror can exclusively reveal that the man bearing a likeness to Clough disappeared as he was being escorted out of the Brian Clough Stadium.

A police escort was required as fans crowed around the man at the final whistle. He vanished in the tunnel from the stand, despite being encircled by police and stewards.

A spokesman for Forrest Chairman, the Kuwaiti born Fawaz Mubarak Al-Hasawi, said last night: “Nottingham Forrest will obviously cooperate fully with any investigation. The club is as perplexed by today’s events as everyone else and we want to a draw line under the incident as soon as possible.”

Clough, who made his appearance during the second half of the Championship clash against Bournemouth, wore his trademark green jumper over a red polo shirt. He appeared to be in his mid-40s. He was obviously delighted with the attention his appearance generated and responded enthusiastically to the standing ovation he was given at the end of the game.

Clough was accompanied by former assistant Peter Taylor. Taylor was Clough’s right hand man throughout the 60s and 70s, but a rift developed when Clough accepted a pay rise from Forrest without including his assistant. Taylor died in 1990.

It is not the first time that the deceased manager has caused controversy. In 1989, Clough punched two fans as they invaded the pitch after Forrest’s 5-2 victory over Queens Park Rangers. Clough was given a three month touchline ban and fined £5,000. He later made a public apology to the pair and made them kiss him.

Yesterday’s events come after the disappearance of over a quarter of a billion people across the globe. The UK became the latest victim of the epidemic when nearly 400 people disappeared Friday. Clough and Taylor are the latest names to be added to the list of missing people.

Liverpool: The City That Time Forgot
Time moving at different rates across Merseyside.

The Mystery of Helen Marr
Was women’s disappearance three months ago linked to global epidemic? 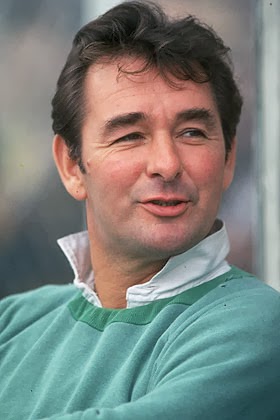