It’s the end of January and the end of the first month of my trying to post something new to my blog every day for a year. As if things weren’t narcissistic enough already, I thought it would be useful to look back on my output for the first month and see what can be learned for the coming months.

This project was conceived to get me off my backside and become acclimatised to the process of sitting down and writing every day. I tend to think of things I want to write about and then they get stuck in my head for three months, before I sit down at the computer and write the entire thing in twenty minutes. However, setting myself a task like this means that there is no time to become insular. The work just has to be done.

In general, things have gone well. I have blogged every day, even if some blogs have gone up at four the next morning (my body clock seems to be set to a twenty six hour schedule). There has been some minor cheating, blogging pieces that were written years ago, but as they hadn’t been posted previously, they still count. That’s meant that I could get on with other bits and pieces. At the beginning of the month I was barely keeping up. Here at the end, I’m a few days ahead.

A number of articles that have been knocking around my head for a while got written in January to varying degrees of success. There was the Best Things Article on Star Trek Deep Space 9, which I’m quite happy with. There was also a trilogy of pieces on Bob Dylan, one of which I wrote years ago, one which had tripped me up for years, but which was pretty much sewn together from the copious notes I had taken. Finally there was a short dialogue concerning the song, ‘Just Like A Women’ written from scratch from an idea I had years ago. ‘Her Ribbons and Her Bows’. was the most enjoyable thing I wrote all month.

On the down side, I don’t think the article, ‘Blue Metal Jazz’ ended up quite how I envisaged it, mainly because I focussed so much on the sections about jazz music, that I forgot to include half of what I wanted to say about heavy metal. The article was written at the beginning of the month, so it had to go up pretty much as soon as I wrote it. The good thing about getting ahead of myself is that I can write something, not touch it for a few days, then looked at it a fresh and do some editing before publication.

To redress the balance, I want to say here what I forgot to say about my love of heavy metal:

I think of all the styles of music, metal is the most literary and the most respectful and reverential to other artistic mediums. Half of what I’ve read, half of what I know comes from intellectual journeys that were begun in the heavy metal world. I first came to appreciate Coleridge and The Rime of the Ancient Mariner because of the Iron Maiden song by the same name (and length). It was the Coleridge poem that inspired Herman Melville to write Moby Dick and Moby Dick that inspired one of the best post-millennial metal albums, Mastodon’s Leviathan. Leviathan is like the soundtrack to Ahab’s inner monologue. If you want an album that reflects the man’s anger and his rage, Leviathan is that album.

Metal bands have always written songs based on novels. One only has to think of Metallica’s ‘For Whom the Bell Tolls’ based on the Hemingway novel or ‘One’ based on Dalton Trumbo’s terrifying anti-war book, ‘Johnny Got His Gun’. I read both books because of Metallica and went on to read more or less everything Hemingway wrote.

Anthrax wrote a couple of songs based on Stephen King novels, ‘Among the Living’ based on ‘The Stand’ and ‘Misery Loves Company’ based on ‘Misery’. I’ve yet to get into Stephen King, I must admit, but I read 2000ad religiously as a kid, so ‘I Am the Law’ about Judge Dredd was always a favourite Anthrax song. “DROKK IT!”

I have a lot to thank metal bands for. I became aware of Henry Miller’s ‘Tropic of Cancer’ when I saw it on the inner sleeve of Rage Against the Machine’s ‘Evil Empire’. Bruce Dickinson’s ‘The Chemical Wedding’ caused me to read everything by William Blake. Indeed, Wolfsbane frontman, Blaze Bailey, is probably most directly responsible for my becoming a writer. I was a member of the Wolfsbane fan club at 18 and  I can remember reading a piece he wrote shortly after David Icke made his now legendary appearance on ‘Wogan’. It was Bailey’s rant against the sneering media reaction that  inspired me to want to do the same. And now I do.

Metal led backwards towards the blues. To John Lee Hooker and Muddy Waters and Robert Johnson and Bessie Smith and Billie Holiday and Nina Simone. From blues I eventually came to jazz. I was a late convert to the genius of Bob Dylan, but between Guns n’ Roses version of ‘Knockin On Heaven’s’ Door’, Hendrix’s blistering ‘All Along the Watchtower’ and Rage Against the Machine’s grinding interpretation of ‘Maggie’s Farm’, I was well versed in his oeuvre by the time I got there. And metal led through a dozen different crossovers to rap and hip hop, via Cypress Hill, Faith No More, The Beastie Boys, Anthrax and Public Enemy.

I use music as a mood elevator, a metronome for writing, a soundtrack to reading and as a relaxant. I need a wide range of musical genres because I have a wide range of moods and need a palette broad enough to match. Hard rock/heavy metal has the broadest spectrum of any style of music other than jazz. Alice in Chains soothe, Clutch cheer, Slayer get me energised and fired up for writing and Tool and A Perfect Circle drop me into a state halfway between relaxation and nervous tension. I don’t listen to a lot of new metal these days, but then I don’t listen to that much music at all. I have enough to work through as it is.

So there you go, that’s that imbalance restored and the karmic, thermodynamic forces are retuned to parity. To finish up, a selection of my favourite articles you may have missed from the month. I’m spectacularly bad at promoting myself, but I would ask that if you read something I’ve written that you like, please do share it. I only want to be read (and to be rich from being read, but you know, one step at a time).

Click on the links below to be whooshed away to genius.

Heaven, Heaven is a Place, A Place Where Nothing, Nothing Ever Happens
Three Views Upon the Miraculous
The Community Strikes Back
In Appreciation of Captain Beefheart
Blue Metal Jazz
Her Ribbons and Her Bows
A Woman of Conviction
Youthful Angst
Best Things Ever #17 Star Trek Deep Space 9
Review: Shakespeare Beyond Doubt

So that’s January done with. To February and beyond! 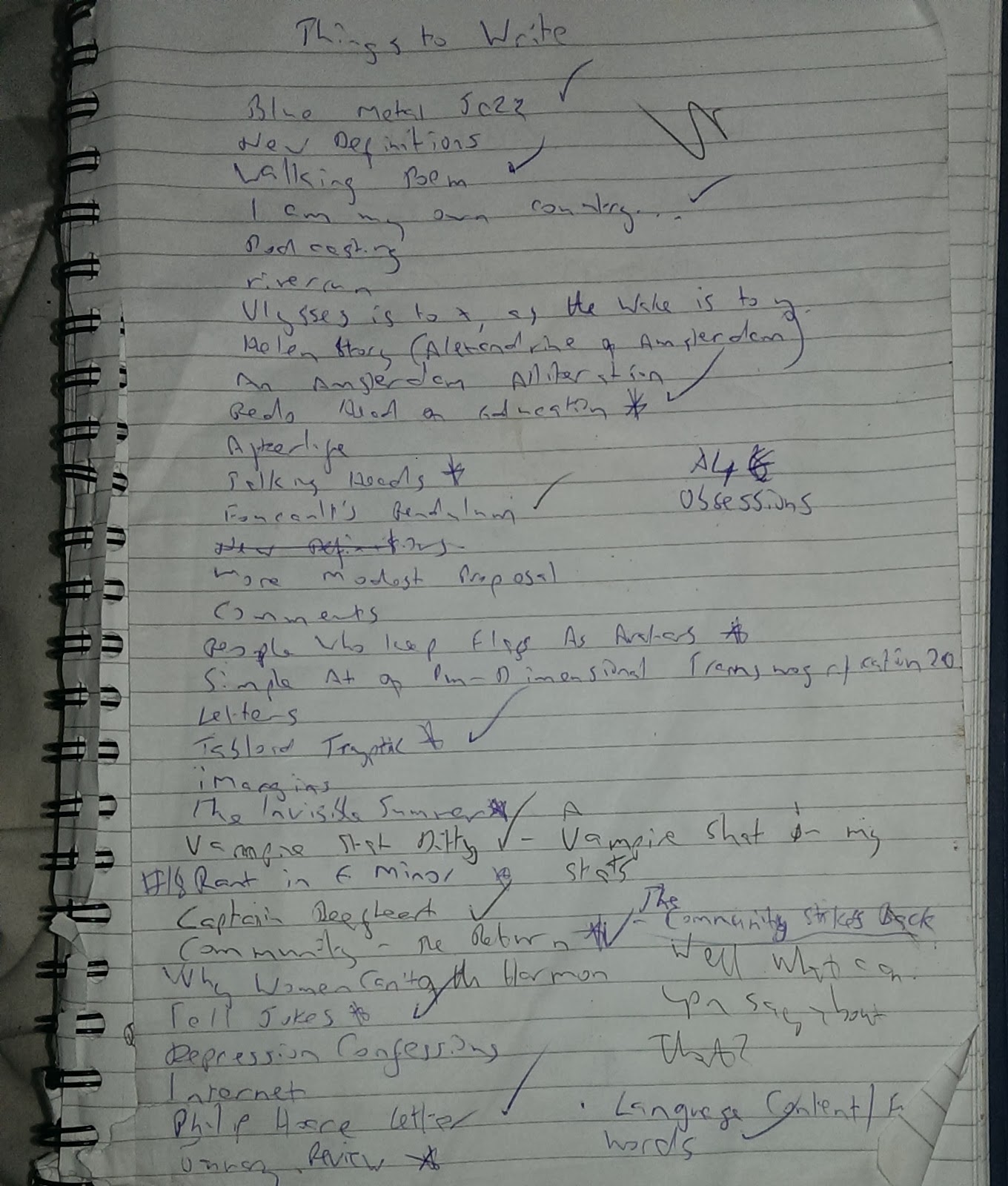