Today Neil De-Grasse Tyson's reboot of Cosmos and how it hilariously pisses off the creationists.

Three episodes into his reboot of Carl Sagan’s Cosmos and Neil De-Grasse Tyson is really managing to upset the creationists. The creationists have offered their usual level of sneering, uninformed incredulity and the scientific community has been quick to defend De-Grasse Tyson, who has stated that he will not debate such deniers. Yet there is no need for the scientific community to defend evolutionary theory or any other theory which contradicts the Bible (which, let’s face it, is all of the them). There is no need to invite creationism on to our turf. We can easily debate and destroy their arguments on their own hallowed ground.

Science models the universe by simplifying it, then observing and extrapolating. All we need to do therefore is simplify this debate and then there is no debate. Why do creationists doubt the veracity of evolution? Because they think that the Bible is literally true and that the universe was created as told in the book of Genesis. And there we go, the debate has been simplified and we can now solve the problem: The Bible is not literally true, it is riddled with basic errors and the book of Genesis has more basic errors within it than you can shake a rosary at. It doesn’t even agree with itself.

So, for instance, the first book of Genesis says that God created all of the animals and then he created Adam and Eve. The second book of Genesis, however, says that God created Adam first, then created all of the animals, which Adam named in a day, and when Adam couldn’t find a suitable mate amongst all those animals (which I assume is why bestiality is legal in many states of the US), then God created Eve.

The first book of Genesis also says that God made all of the animals out of water, but says he made them out of earth in the second book. First books says “I have given you all the seed bearing plants and herbs to use” (a favourite quote of the pro-cannabis lobby), but in the second he says, oh except for the fruit from the tree of life. Touch that and you’re in trouble.

Genesis also manages to state that the Moon is a great light (“God made two lights”) when it is in fact a reflector. It says that God created plants before he created the sun (though the second book of Genesis reverses the order) and that rain is caused because there is firmament which separates the water in the seas and oceans form the water that is in heaven and when God slides some kind of window across, then it rains. There was also no rain before Noah’s Flood. I mean, honestly.

Now, if you believe in God, then that’s your own affair and nothing to do with me. If, however, you believe that the Bible is revealed truth and the word of God, and you’ve read it, then you’re an idiot and there really no other word for you. Besides, if you’re convinced that the Bible is the word of God, why are you watching television? Have you not read the second commandment? “Thou shalt not make unto thee any graven image, or any likeness of any thing that is in heaven above, or that is in the earth beneath, or that is in the water under the earth.” In other words, all images are sinful and as TV and film are a series of static images played in high speed, watching TV is like breaking the second commandment twenty five times a second.

Fundamentalist Christians are always trying to obfuscate and suggest that there is no evidence for evolution, yet the evidence for their own beliefs is non-existent. No serious archaeologist thinks that the story of Exodus ever actually happened. Two centuries of searching have failed to find a single shred of evidence that the Jews were ever in Egypt, let alone slaves there. Moreover, the Bible says that Moses freed six hundred thousand slaves from a total Egyptian population at that time of three to three and a half million people. That’s six hundred thousand men, by the way. Women, children and non-Jewish slaves bring the total closer to two million. Yet Egyptian civilisation shows no evidence of suffering any kind of collapse as a result of losing more than half its population on which the rest had been dependent as slaves for four hundred years (or four hundred and thirty years, depending on which bit of the Bible you read).

All indication is that the Israelites were a Canaanite tribe that had always lived in the land Canaan and made the Exodus story up in order to claim divine right to the land. It’s also, as with much of the Bible, as series of tall tales. In several places the Bible claims that such and such a thing numbered as many as the grains of sand on the shore, as with the Philistines, for instance. So, there were as many Philistines as humans beings that have lived during the whole of recorded time then? Yeah, right.

The problem for Fundamentalist Christians is that there is the Bible on one side, which tells one version of events, and on the other side there is geology, archaeology, Egyptology, astronomy, astrophysics, cosmology, cosmogony, biology, chemistry, radio carbon dating, genetics, DNA sequencing, evolutionary theory, linguistics, and dozens of other scientific and humanities disciplines all on the other side telling a very different story, all of which agree with each other on many different aspects of the history of humanity and the universe at large. Likesay, the Bible can’t even agree with itself. 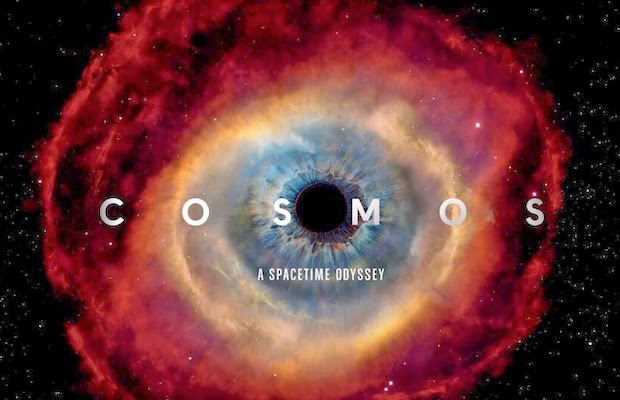 As for Cosmos itself, yes it’s very impressive. Maybe a little simplistic, but I’m used to this. As a former Astrophysics undergraduate, any program on physics is always more about the enjoyment of the adventure than about learning anything new. If you want to actually learn, go download physic lectures from Stanford, Oxford or MIT.

The effects for Cosmos are very well done and the stories that each episode has so far told is very much in the same narrative style as in the original Cosmos series. This is probably largely thanks to the involvement of Carl Sagan’s widow, Ann Druyan, who wrote the series and co-wrote the original series with Sagan.

My only two criticisms of Cosmos are firstly the use of autocue, which always annoys me in modern presenter led documentaries, where they’re obviously reading off of an iPad. Perhaps I’m just spoilt, having been brought up on a diet of David Attenborough documentaries, who not only didn’t use an autocue but often didn’t even have a script. Attenborough knew what he wanted to say and he could pick up his thread a continent apart as if the director had said cut ten minutes earlier.

The other thing I want to complain about is the usual standard of appalling English accents used in the animated sequences. It’s like watching some cheap cable channel version of Sherlock Holmes, all set in the same parallel universe as the place where Scottish people talk like Scotty came from in Star Trek. You spent all that money on special effects but you couldn’t find one English actor to voice Isaac Newton?

Other than those two minor gripes though, Cosmos is exactly the kind of program of which we should be making more. I like Neil De-Grasse Tyson and one would hope that he will inspire a new generation of astronomers and astrophysicists in the same way that Brian Cox’s Wonders Of series have done in the UK. Just so long as De-Grasse Tyson doesn’t stand on top of a mountain going, “Isn’t science brilliant.” we’ll be ok.