In Our Present Time


The one edition of In Our Time that you won’t find in the BBC archive.

In Our Present Time

Announcer: And now on Radio 4, In Our Time with Simon Brotherington.

Simon: Julie Craig, if we can start with you. Can you start by giving us a brief outline of the early years of Julius Caesar?

Julie: Certainly. Gaius Julius Caesar is born around 100BCE, before common era, or before Christ. He’s born to Aurelia Cotta and Gaius Julius Caesar. His family are patricians. They have noble roots, though at this time the family isn’t particularly rich or influential. They...

Simon: Sorry, can I stop you there for a moment. You said Julius Caesar is born around 100BC?

Simon: But is born? Is born? Surely you mean, was born.

Simon: Look, unless I’ve massively misunderstood the notes you all sent me, we’re talking about events that happened over two thousand years ago, correct?

Simon: But you’re talking about it like it’s going on now.

Simon: Well it’s weird. Anyway, I interrupted you. Go on.

Julie: Erm, well, ok, so, his father dies in 85BCE and at the age of 16, young Gaius becomes head of the family.

Simon: Doesn’t matter. Lawrence Schutt, if I can turn to you to move things on a bit. As I understand it, Julius became a priest of Jupiter, where he narrowly escaped death in the purges of the dictator Sulla, so he joined the army and went off to fight in Asia.

Lawrence: That is correct, Simon.

Simon: Ok, so take the story on from there.

Lawrence: Ok, so Gaius joins the army and serves with distinction at the battle of Mytilene, where he is awarded the Civic Crown.

Simon: But see now you’re doing it. This is supposed to be a high class discussion programme. We’re supposed to be educating the listeners about history, not recording a DVD commentary.

Julie: But this is how we always speak. It’s never been a problem when I’ve been on here before.

Simon: You mean it’s not been a problem.

Simon: Sorry, that just really gets on my tits that. And look, I may not have a PhD in History, but I have at least worked out the difference between the present and the past tense. Wendy Clarence, I hope that you’re going to introduce some sanity into proceedings. Talk about when Julius Caesar was captured by pirates.

Simon: Was in the year.

Wendy: Sorry, was is in the year 75BCE. Gaius is sailing to Greece to..

Simon: Was sailing to Greece.

Wendy: Was sailing to Greece to continue his studies, when he’s captured err, was captured by Cilcian pirates and held for ransom.

Wendy: It is said that when he heard the pirates wanted 20 talons for his ransom, he demands, he demanded, he, he demands, demanded [bursting into tears] that they ask for at least 50.

Simon: Oh good grief. You academics, you don’t like being out of your comfort zone, do you? And now look, it’s nearly the end of the program and we haven’t got anywhere near the murder of Julius Caesar. What do you have to say for yourselves?

Simon: Worst episode of In Our Time, ever. And I do mean ever.

All: Sorry Simon. Wendy blows her nose and sobs.

Simon: Next week on In Our Time, Melvyn and his guests are, err, will be talking about the history of hostage taking. Thank you very much for listening. 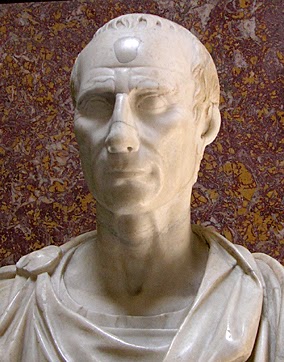