Yesterday's blog, later than ever...

Do you have a secret language? Do you use lines from comedy routines and movies as shorthand to communicate with your friends? Did you even know about the ostrich that raised the tiger cub?

An obvious example of what I mean is saying, “Honestly, who throws a shoe?” from Austin Powers, The Spy Who Shagged Me, to refer to someone doing something patently ridiculous. Or retracting some opinion previously stated as absolute fact by saying. “Oh, then maybe it’s not green.” a line from This is Spinal Tap. 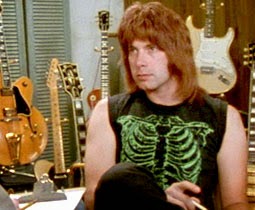 To this day, whenever anyone I know goes on holiday or goes anywhere exciting, I have to ask, “How was it kitten, was it magic?” in reference to Spaced. My brother and me still communicate, often exclusively, in lines from Wayne’s World. Everything from expressing surprise at the length, height, or duration of something by going, “That’s like way bigger than a normal car.” adapted to the particular circumstances, to communicating the thought that we’re lost with, “I think we took a wrong turn, ‘cause now we’re outside.”  “What a shitty circus.” and “If it’s a severed head, I’m going to be very upset.” also get quoted in the strangest of situations.

Not so long ago, I re-watched Wayne’s World with a friend. The next day I was in the supermarket and found myself accidentally wandering through the feminine hygiene aisle. The first thought that popped into my head was, “That’s not Wayne’s basement.” giggling to myself. I do this a lot these days.

I used to go out with one girl who was always trying to pass off Simpsons quotes as her own. “Yeah but when I do it it’s cute.” Or ask me if I wanted a drink using the exact same voice as Janine in Ghostbusters: “Yew want some cawfee?” We even used a line from an Eddie Izzard routine (“We were so bored.”) when hitchhiking as a code word  through Europe for if we got a bad feeling about someone giving us a lift (we thankfully didn’t need it).

I use it when I’ve been trying to do something for ages and finally manage it. What scares me is that I might accidentally blurt it out in unfamiliar company, without context. To be honest, one of my biggest fears is that I’ll develop dementia and start blurting out all of the things in my head. You have no idea how much self-editing I have to perform in an average conversation. My mind is always looking for the perfect one liner, but most of the things that pop in there aren’t appropriate. There’s only one or two people to whom I can say what I’m thinking, and only because their mental Tourette’s is worse than mine.

So there you go, comedy and its polylingual uses. Future generations will speak in nothing but old comedy. You know what you want? You want the moon on a stick. You’re just angry at yourself because you can’t play the guitar properly. I said ‘brick’. Not ‘penis’.

You ain’t seen me, right!