Right, it’s Friday so here’s a cute little piece about my cat.

“The original meaning of the goddess Isis is more difficult to determine than that of her brother and husband Osiris. Her attributes and epithets were so numerous that in the hieroglyphics she is called ‘the many-named’, ‘the thousand-named’, and in Greek inscriptions, ‘the myriad-named’.
James George Frazer, The Golden Bough

Except, as with all the characters in Finnegans Wake, Issy represents daughters and young women throughout literature and history. As such, I keep giving her further names and have for the more than two years that Issy has been with me been keeping a list of all her names. So here I present the list as it currently stand, with footnotes: 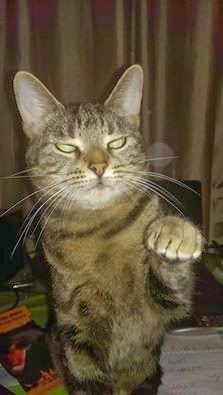