Time to get back on track:

As much as I can be said to possess any positive qualities, I would say that my two greatest skills are that 1) once I learn something, I know if for all time (with some minor revision), and 2) that if I really want to know or be able to do something, I persevere with it until it is done.

That perseverance can take twenty years or more, but I get there in the end. It took me fourteen years to give up smoking, almost from the day I started smoking at sixteen until the day I finally gave up at thirty. I used to give up two or three times a week for an hour or two, until the withdrawal kicked in and I’d go scurrying off to the shops. Even in the final year of school, my friend and me would vow to give up smoking walking out of the school gates and be coppering up for fags by the time we got near home.

At thirty, something changed and I finally quit. Aside from a couple of drags on tobacco laden joints, I haven’t had a cigarette in eleven years. To anyone looking to quit, I can only repeat the advice that an ex-smoker gave me as I was going through my finally successful attempt: Get through the first three hours, then the first three days, then the first three weeks and then you are done with it and out. It’s good advice. The geometric progression appeals to the mathematical part of my brain. Time doubling up at each stage until the nicotine is out of your system. I persevered and it finally got done, probably early enough in my life to suffer no long term lasting damage to my body.

The same applies to languages. I, like most people born in an English speaking country, have no natural aptitude for language. I’m an expert in the English language, I know many of its tricks and my study of the works of James Joyce have left me with an appreciation for the mechanics of language to the point where I can usually say not only what I want to say but pick the way to say it that is most appropriate to the situation.

In many ways, English suffers from its own success. It is probably the most versatile language in the world. I often notice that in writing a sentence, even a single clause in a sentence, the same idea can be expressed in as many as a dozen different ways. English is built upon the vocabulary and grammar of so many different languages, Saxon, French, Greek, Latin etc., that it has achieved unparalleled power in the world. There are more widely spoken languages in the world, but English in the international business language, which effectively makes it the most powerful language in the world. So why bother to learn anything else?

Like most British people, I learnt French at school and was useless at it. Maths I can do in my sleep. It’s just a bunch of rules you have to learn and apply. Language has many more shades of grey. Yet I would always feel like a failure if I didn’t learn to speak at least one other language, no matter how inept I am at languages. I’ve been trying to get the hang of French now, on and off, for over twenty years.

In learning another language you are really learning about your own language. Which is what takes the time to become bilingual. If perseverance if one of my greatest skills, then one of my more annoying flaws if that I have to learn every last thing about something before I can learn any of it. At university studying physics, simply not knowing how to properly pronounce the name of a Greek letter could throw my understanding of an equation right off. In learning French, the problem has always been that the translations given of certain words and phrases are obviously not the literal translation, but an approximation, and this always thrown me off. I need to know the literal translation and history of that phrase or word. If I’m going to speak another language then I want to be able to think like a speaker of that language, not just do a poor impersonation of one.

I persevere with French for two very good reasons. One is that French is one of the cornerstones of the English language. Most of us already speak an adapted version of French. Every time you talk of eating beef or pork, of regarding something or of putting a cordon around something, you are using words left over from the French conquest of England in 1066. I persevere with French for the same reason that I’ve taken to teaching myself Latin and Classical Greek, because in learning its founding languages I gain a better understanding of English itself.

The other reason I persevere with French is that there are so many French writers, Emile Zola, Sartre, Rousseau, Rimbaud, that I’ve read and love in translation and want to read in their native language, as they were written with the right rhythms and shades of meaning. I am currently reading Le Mur, a collection of short stories by John-Paul Sartre and finding that I am understanding about half of it. That’s progress and a sign of what perseverance can do. I have this fantasy, which I also kind of know to be true, that it will have taken me twenty years to become bilingual and then learn four or five languages in a only a couple of years. More than French authors, my true linguistic ambition is to be able to read Chekov and Dostoyevsky in their native tongues. However, one step at a time. French first. I’ll work my way up to Russian. 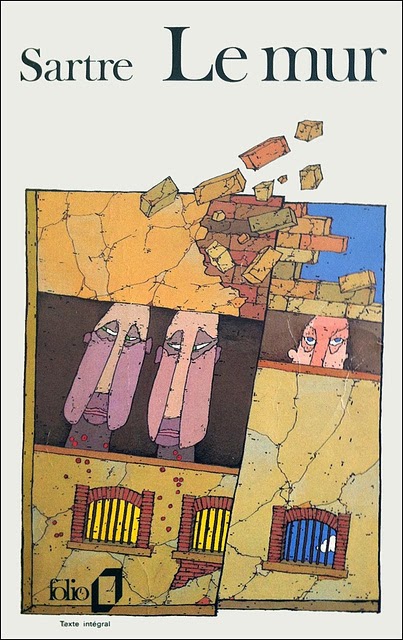 For anyone who want to learn a new language but possesses my level ineptitude, here’s a few things I’ve learnt. Firstly, learn body parts, the five senses and types of thought. Any language is after all an attempt at telepathy, to communicate what is in your head for another person to understand, and so the first job is to define who you are in that language. Start with the head, the trunk, the arms and legs, moving to the eyes, ears, nose, fingers and toes etc. Then see, hear, speak, read, write, think. Also, probably the most important word in any language and the one usually with a multitude of changing forms is the verb, to be. Get that one down before all others. So many other words are invariably based around the verb, to be.

The other piece of advice I can offer as a writer is to immediately disregard the nouns and verbs. Verbs nouns and their associate adjectives and adverbs make up the bulk of any language and just have to be learnt. However, as discussed in a previous article, while function words (articles, conjunctions, prepositions and pronouns) account for only a handful of words in any given language, they can make up as much as half of all text and speech. Learn them first and keep refreshing your memory at regular intervals and you will find that you will at least be able to get the sense of any piece of written text. It’ll stand you in good stead as you go through learning everything else.

I guess the most difficult thing I have found to persevere at has been as a writer. I wanted to be a writer from the age of about sixteen and yet it took me until my mid thirties to find myself comfortable enough to be able to write. It’s back to that need to know everything in order to know anything. I wanted everything to be perfect first time without effort and as long as I had to try at writing, I found I couldn’t write. Part of the reason for trying to write and post new articles everyday has been to train my brain to sit down with the shape of an article in mind and be able to colour in that shape on the page in a single session. Of late I have got lazy and found myself digging around old journals and notebooks looking for something half decent to post, simply because I don’t feel like writing today. Yet the point of this exercise is to write every day, not just edit old stuff. I’m pleased to say that this entire article is being written off the top of my head, from scratch, in a single writing session, with little more than a title and a rough shape for what I want to write. Because I persevere and I always get there in the end.

Perseverance, it’s not just a song by Terrorvision about whales and dolphins. It’s also necessary in learning a new skill or to becoming an artist. If it doesn’t happen first time, no matter. Keep going, keep trying, even if you’re useless at it. I’ve been learning guitar on and off for thirty years and I’m still appalling. But I’ll keep persevering for the simple enjoyment that playing brings me. Which is all anyone can really expect out of life.