Went completely off the boil over the weekend, so to make up and catch up, here's the first part of a travelling trilogy:

We went to Amsterdam by the scenic route. My cousin was studying music in Totnes, Devon at the time. She’d won a free trip for two to Amsterdam and knowing that I was planning on going backpacking anyway, invited me to be her plus one. I was in the north west, so the first stage was to take the train from Preston, a six hour journey.

I arrived in the mid afternoon and had a night to kill before the twenty three hour coach journey to Amsterdam via London, Dover and Calais. We spent that summer evening taking a trip out to Teignmouth, where Keats wrote much his epic poem, Endymion:

A thing of beauty is a joy forever,
Its loveliness increases; it will never
Pass into nothingness, but still will keep
A bower quiet for us, and a sleep
Full of sweet dreams; and health, and quiet breathing.

A fine place to spend a last evening in England, nestled there on the east coast of the Devon peninsular between Exmouth to the north and Torquay and Paignton to the south, wandering down to the beach the shape of a crescent moon, flanked by the River Teign to the west and the English Channel to the east. We ate fish and chips at a fish and chip restaurant and skimmed stones and gazed in awe at the orange, pink and red sunset that set the gathering clouds ablaze and burnt them black. I still have pictures of that sunset that were developed in Bruges with the rest of the roll of film.

We arrived back late at Helen’s student digs, a train having caught fire during the evening and delayed all the other trains. We traipsed back from the train station gone midnight, walking between flower boxes that filled our senses with aromas rarely noticed in the daylight. I tried to sleep, but it was a fitful slumber, filled with strange dreams and constant wakings to check my watch.

The first leg of our journey was to leave just after nine. We got to the coach stop well in time. The driver took our belongs to pack beneath the coach and asked where we were going. “Amsterdam.” I blurted out, not thinking. We may have been going to the Netherlands but the driver was only going as far as London.

It was four or five hours to London, with various stops along the way, but the time flew by as we chatted and read and listened to music and had a picnic along the way. London seemed to come all too soon. We had three hours to kill before the evening journey out to Dover. We stashed our rucksacks in left luggage and went on the tube to Camden Town. Helen, being the hippie she is, wanted to visit the market and other shops around groovy Camden Locks. We sat out by the canal and got talking with a group of lads who shared a joint with us and told us to check out the Bluebird when we got to Amsterdam.

We ate dinner from fast food stalls in the market on picnic benches, then caught the tube back to the coach station. Left luggage couldn’t find where they’d left my luggage and not having long before our coach was leaving, I had to climb under the hatch and hunt down my rucksack. By the time I had convinced staff that it really was my bag by giving them a detailed rundown of what was in it, we were at the back of the queue for the Amsterdam coach and had to sit in the only seats left, up at the front of the coach like the uncoolest kids in class.

London drifted past the window in perfect filmic cliché, the Houses of Parliament, Big Ben, the MI6 building, before we turned right and headed down the coast. Dover came hard upon and before long we were rolling into the belly of a P&O Ferry and I, who at 27 was about to leave mainland Britain for the first time, excitedly jumped up and down up on deck as the mooring ropes were released from the dock with a plop into the water and pulled up the sides of the ship. We watched until the White Cliffs had shrunk away on to the horizon. Then we went and had a drink or two at the bar.

First time in a foreign country and yet now I had to cross two countries just to get to my ultimate destination, though I would see plenty of Belgium and France in the next few weeks. After the adrenalin rush of not being in Britain wore off, I realised that the continent was just the same, with its rain and road signs and I pretty much slept the rest of the way until morning. I vaguely remember that we stopped at a service station in the middle of the night, somewhere on the border between Belgium and the Netherlands. I wondered around in a zombiefied daze, grabbing automatically at drink and food that I didn’t really want and hoping that they would accept Guilders, as that was all the currency I had.

It was half five in the morning by the time we reached Amsterdam. We stopped at some random location outside of the main part of the city, where the driver extorted an extra two Guilders from the passengers to take them all the way to Amsterdam Central. Our hostel was not far from the station, near the Red Light District. Helen’s university had made the reservations and given Helen cash to pay for our beds. We arrived a little before six, where the only person on duty was the night attendant who could find no record of us in their books. He got us to hang around for the manager, who arrived around seven, a rude Dutch man who said we had no reservations, he no spare beds, and kicked us out onto the street.

We were in trouble. It was Saturday morning in Amsterdam at the height of the tourist season, so we had no chance of finding another hostel at this late stage. Our only hope was that Helen had brought a tent with her, planning to do a bit of backpacking of her own after we parted company. The night attendant, a pleasant guy from Sheffield, told us there was a campsite north beyond the train station. There was a free ferry which took you over the water and then a bit of a walk up to the campsite.

It’s a good job the Dutch are such notorious multilinguists, because the instructions we were given were vague and once over the water we had to keep stopping every five minutes to get new directions from sleepy locals. Eventually though, we found the campsite, paid bargain prices, spending the rest of the hostel money on food, booze and pot, and at little after eight in the morning, in the pouring rain, we pitched our tent, climbed in our sleeping bags and got a few hours precious rest.

The alarm was set for twelve, but upon sounding we engaged in a brief, barely understandable negotiation to get a couple more hours shut eye and both went back to sleep until 2 in the afternoon. I needed it. For the last two nights, I’d merely been going through the motions.

The showers were an adventure. You hear lots said and written about the toilets in French campsites, but less about the showers in Dutch campsites. There’s a metal disc where the tap should be and to get the shower to work you seemingly have to place your fingers in an equidistant circle around the disc. I have small hands and can’t manage it. I found a faulty shower instead and manage to wash myself beneath a dribble of water. It’s a bit like that cheap washing up power that you buy as a student that doesn’t quite wash your clothes, more just gets rid of the smell.

Having been to the Netherlands on many subsequent occasions, I can state with confidence that nowhere in Europe, including the United Kingdom and Northern Ireland, will you find a better example of what is commonly called the Full English Breakfast than here. They did a great one at the campsite, even at three in the afternoon. We fill in postcards to put in the on-camp post box, leave some stuff in their safe, then catch the bus back into town. Helen wants to do some busking, so I leave her on a bridge near Waterlooplein, then end up wondering around the market nearby. She’s made next to nothing by the time I come back, so packs up her guitar and we end up wandering back through the market and coming out, by pure accident, right next to the Bluebird café. We explore a bit more of the centre of town, then double back to the Bluebird. I get my first taste of a Dutch coffee shop.

We meant to pop in for an hour or two. But there’s an enormous leather sofa in the Bluebird, and once people leave and we upgrade from the chairs flanking the tables around the arc of the sofa to the sofa itself, it’s virtually impossible to get up again. We’re there for five hours, smoking increasingly strong skunk. It’s one of those nights were not a lot happens, not a lot is said, but you’re happy to just exist in the moment. It was a long time getting here, but finally I have arrived where I want to be.

We leave at midnight and stumble our way back in the dark to the ferry behind the station and up the same residential streets to the campsite. Camp fires are burning in the darkness. Stoned faces seek answers in flame. We have a last smoke and go to bed. Not a bad way to spend your first day abroad. 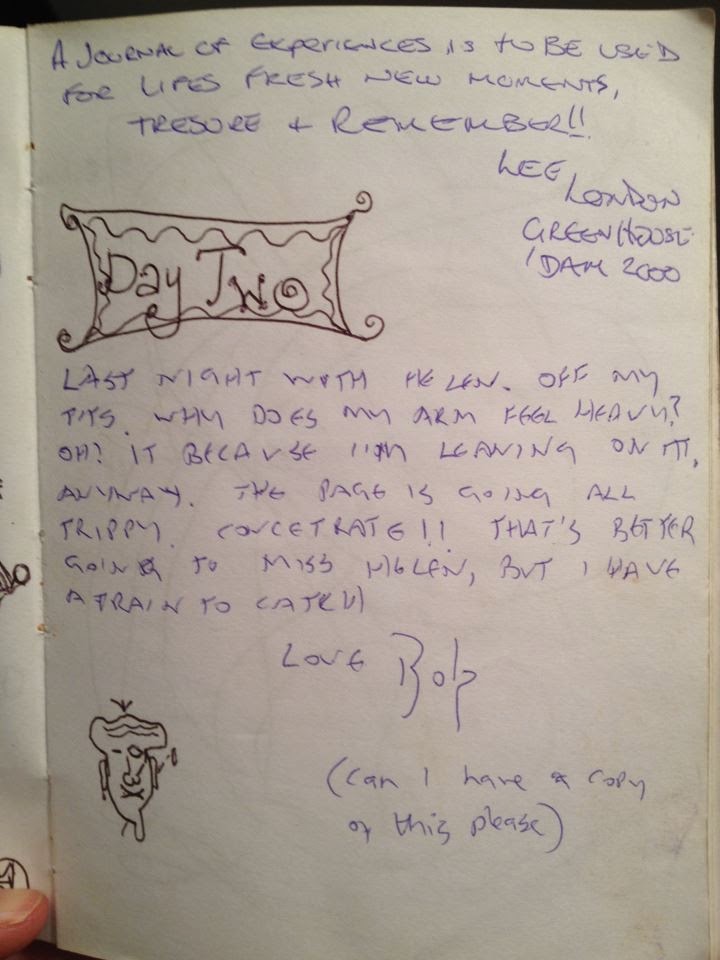 Email ThisBlogThis!Share to TwitterShare to FacebookShare to Pinterest
Labels: 2014, By A Canal, Maher Family, Travel Writing