A Remembrance
I have a particular time and place in mind: Graham Road, Churchill Estate, Helensburgh, Scotland, 1985. I can see my room on the third floor of the weird naval house we lived in. I had a built in cupboard in my room that I put my TV and Spectrum 48k+ in and play Dambusters and pretend I was flying over Germany. I also remember having a machine that I don’t remember any other person on Earth having, but which my dad bought me, called an Aquarius. It only had two games, one of which was a version of Tron. I remember you plugged the cartridges into the machine itself. I rewired the plug one day and turned it on and it blew me to other side of the room. Or did I magnify the distance I was thrown for comic effect.

I remember Martin who lived opposite me on the opposite site of the back green where we lived and who I was best friends with until he moved to Yorkshire and went to public school. There was a little gang of us for a while, all playing Star Wars characters and building bases in the woods that ran ‘round one side of the estate. And there was a copse in the middle of the estate too, a kind of wooded valley where we used to ride our bikes down. My mum, I remember, wouldn’t let me have a bike (they were dangerous I was told), but someone’s dad gave me a kids bike, much too small for me but I learnt to ride on it. There was a tarmac sports field on the estate and I can remember being there on my own and making a ramp and riding it and the bike carrying on and me falling off it and landing on my coccyx and lying there in agony for some time.

Eventually my parents bought me a second hand dark green Striker, with the brake on the back wheel that worked by pedalling backwards and I never looked back.

I remember having abridged talking book versions of the first two Indiana Jones films that were voiced by a different actor. I became obsessed with Harrison Ford that year after seeing The Temple of Doom and having virtually an entire wall covered in pictures of him. I’d hum the Indiana Jones theme all the time and my mates hated me for it.

I was also the smelliest, filthiest child you’d ever known at that age. And a pathological liar, but I’ve always lived in my own world and was always making up stories to make myself more interesting. It was a trait that continued throughout my childhood. But yes, I would sit in puddles or wade or the stream in the woods. I was an odd child. My mum was a Cub Scout leader and when we used to go on Cub weekends I would disturb everyone else, exposing myself from the top bunk. Don’t ask me why, like I said I was weird. In the end my school (John Logie Baird) sent me to a child psychologist and found that I was completely normal, just hyperactive. Maybe I was acting out for always being moved around. That’s a guess, I have nothing to back that statement up. I went through stages like this. Later I went away on Scout camping trips and would always get homesick and cry. Maybe that’s why I’m still living in this house, traumatic childhood memories. That was when I always got my first exposure to porn. My mates Mark and Stephen, their mum and dad had a collection of hardcore Dutch porn magazines and we used to fish them out and have a look, though I don’t think I was sexually mature yet, happened late for me as far as I remember. At scout camp I was in the same tent as the son as Akela and he had some very hard core mags, I remember one image of a women taking on six or seven men at once.

What else do I remember? Well as this is more a remembrance of Graham Place than 1985, I remember watching Live Aid in my bedroom and becoming aware of Queen cause my dad got drunk one night and was listening to Greatest Hits, singing drunkenly to it and finding the record next day and playing it and being blown away. Was probably the first record I ever loved, although I remember buying (or being bought) my first two albums then, either Police or Adam and the Ants, I forget which came first. I also began to read at that late age, but it was mainly choose your own adventure books. I had been bought Indiana Jones ones, but Stephen said they were rubbish and lent me City of Thieves, which I read that night and probably lost first time around and then cheated from there on in, but I was hooked and spent every penny I had on getting new books in the set (I’ve always been a collector and a completist). He also lent me a copy of The Hobbit which was the first book I’d read all the way through except for A Hundred and One Dalmatians, which I had read in Plymouth.

We had a box room with tea chests in it that we used to move with (it happened so often that they got kept, despite the splinters). And of course there was Boomer, our mongrel dog that I confess I wound up quite a lot and was quite badly behaved. He slept in the kitchen on a old sofa that he proceeded to rip apart. He had eight names that me and my brother used to be able to rattle off at will, Boomer Arnold Pooch Pongo Fred Benji Something Maher. My brother will remember I’m sure. A nut of a dog that tried to hump the leg of everyone he met. We should have had him spayed I guess, but it wasn’t as prevalent a procedure then as it is now.

I remember having mates that were into much cooler music to me and hearing about how Bon Scott had died chocking on his own vomit, which seemed the ultimate denouncement of alcohol to my young mind. Of course it was in fact John Bonham that died chocking on his own vomit, Bon Scott died of hyperthermia falling asleep drunk in his car. I can remember falling out with my Stephen and Mark and going to a friend’s house who was into The Jam and Style Council and AC/DC (The Highway to Hell cover is very strong in my mind). I used to watch Entertainment USA religiously, which was ironic as being 12 I was probably Jonathan King’s core demographic given his later imprisonment for sex with the under aged. I can remember seeing Iron Maiden being interviewed during the Powerslave slave tour of the USA. I hated Maiden at that point.

I also remember the day Challenger blew up, watching it at Stephen and Mark’s house, which I’m sure was live. The first launches certainly were live, because I remember it took days of delays before Columbia took off on its maiden flight and in the meantime I was bought a copy of the handbook from town, which is in the house somewhere I think.

The house in Graham Place isn’t there anymore. I have the street up on Google Maps street view and all there is a grassy knoll where our row of houses used to be. I can see the garages we used to play football with my dad against until someone shouted at us, and I can see the foot high wall at the opposite end where we would subsequently kick a ball around. Martin’s row is gone too and all that is left of that time is the long strip of grass between the rows where we would play football at the weekends and on holidays. All the other pebble dashed and white washed married quarters remain. I guess I could reminisce all night looking at this image, so much of it is clear, almost sends a shiver through just remembering minor details that I haven’t thought about for years, going to see Return of the Jedi, talking about when whichever film it was would be coming out on video, breaking our first video the day we got it by rewinding and fast forwarding a tape in it and being sent to bed early and waking up the next day to find Slave 1 sat there (it was my birthday) and watching Blade Runner as my birthday film (the crappy original with the voice over). And getting a shit load of Star Wars toys for Christmas, AT-AT, Scout Walker. I had a Jabba toy too, but probably later.

I remember the day we moved away and spending so long waiting for my dad to finish with the navy landlord that the battery in the car went flat and we had to wait hours for a mechanic to come and give us a jump start.

The place seemed enormous when we were kids. We went back there on holiday in the mid 90s and it seemed tiny. Everything seems bigger when you’re young I guess. It was an interesting place to live and I still remember the place like it was yesterday. 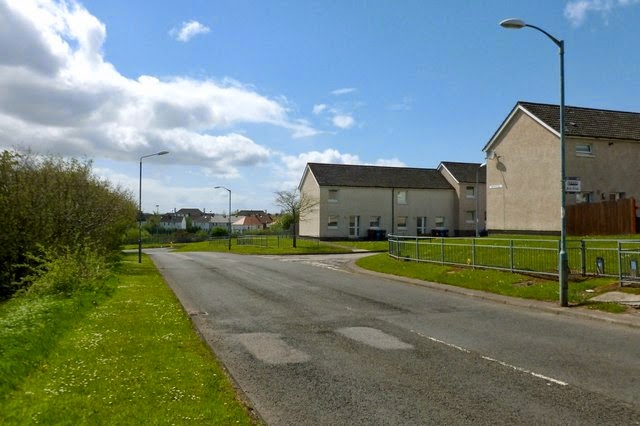 Email ThisBlogThis!Share to TwitterShare to FacebookShare to Pinterest
Labels: 2014, Queen