I didn’t have anything else for yesterday:

This the second plane I’ve ever been in. I don’t remember the first. I was eight months old. I think it’s a Sesna. It has no door.

Who’s bright idea was this?  I’m dressed in a light blue, thermal body suit, lent to me by John’s sister. I have a crash helmet and the main and reserve parachutes have been strapped to my body so tightly, that I’m virtually foetal. Sat on the floor of the plane, in between the legs of John’s brother in law, Tian. I look around at him. He’s white as a sheet. I know how he feels.

The plane is slowly climbing to 2,200 feet, where we will be ‘invited’ to leave the plane. The fields of North Lancashire shrink beneath us. I can see sand and the Atlantic moving into my ever expanding field of view. We’re at the right altitude and it’s time for the first of us to make a hasty exit. This is mainly because there is, we realise, no invitation to exit the plane. The first to go are screamed at. ‘FEET OUT, HEAD UP, GO.”  And they drop like a stone out of the plane. Straight down. Another quickly does the same, before we circle back around to the optimum position and the whole process begins again.

John is the second of the third batch to go. We circle ‘round for a fourth time and suddenly my moment has come. My brain has ceased working. There is no fear, no emotion of any kind. This always happens to me in moments of even moderate stress. My mind simply say, This is too big, and turns itself off. ‘This is Rob’s brain. I’m afraid I am unable to deal with your request for an emotional response at the moment. However if you’d like to leave a message, I’ll scare the shit out of you when I get back.”  Looks like I’m on my own.

My feet are out, my head is up and I go.

Silence. Well except for the air rushing past me. Or am I rushing past it?  I’m  in sensory overload. I should be shouting, one thousand, two thousand, three thousand, check canopy, but I think it’s a bit late for that. It seems to have taken an age for the static line to activate my parachute and slow my rate of decent. It’s so beautiful up here. I can see for miles.

Damm it. I want to admire the view and contemplate the nature of the universe. It is not to be. There’s a one way radio strapped to my chest and the ground controller is shouting at everyone. I’m supposed to be making for the big white cross, but again I think it’s too late. I seem to be drifting into the next field. I don’t think any amount of pulling on the toggles attached to parachute lines above my head can stop it.. They’re supposed to spin me left and right, but I seem to lack the subtlety to operate them correctly. And no amount of ‘Right, for fuck’s sake number seven, right.’ is going to prevent that.

I’m coming down in the opposite field, just as I predicted. I touch down quite effortlessly. Bend my legs, collapse and roll with textbook precision. It’s good to see I got something right. I try to get up, but the wind has picked up and my chute jerks me straight back to the earth. My second effort produces much the same result. Third time lucky?  Yeay, there we go. Oh look!  So that’s what my canopy looks like. I should really have checked it about two thousand feet higher up. Oh well no harm done.

And only after it’s all over do I now feel exhilarated. The adrenaline is pumping. I feel great. I want to go again. 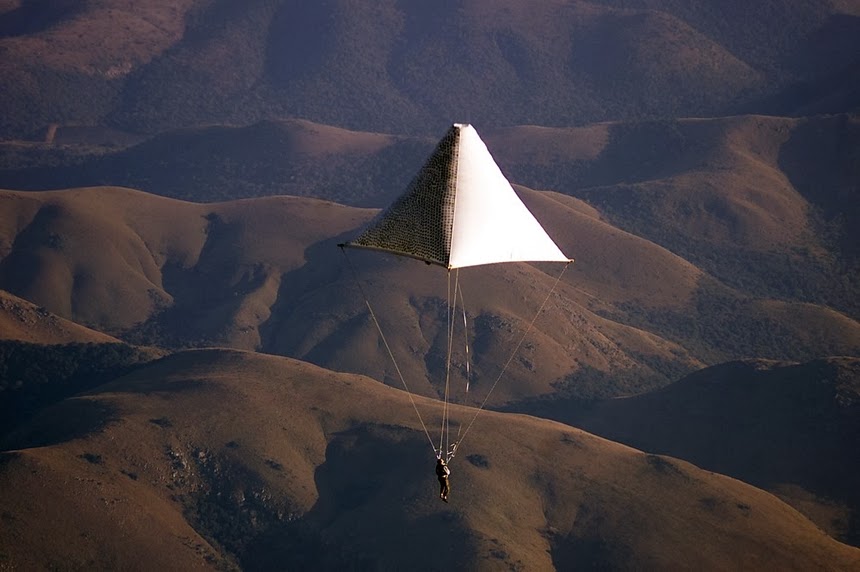 Email ThisBlogThis!Share to TwitterShare to FacebookShare to Pinterest
Labels: 2014