The advent of the MP3 player, Spotify and the like means that many kids growing up in the 21st century will never know the joy of listening to an album from start to finish. It’s not just kids either. My mother works from home and listens to her iPod on shuffle the way that many people do. It’s part of the growing trend of slowly wearing away attention spans. Society is bound to collapse not out of any ecological or natural disaster but by no one being able to pay attention to anything long enough to learn anything, an idea which I believe was explored in the first season of Star Trek: The Next Generation (When the Bough Breaks).

Maybe it’s because I’m a reader, but I still think there’s something intrinsically beautiful about the internal narrative of a well-crafted album. I do use an MP3 player to listen to music these days, which makes life a lot easier. The first time I went backing around Europe, I had to have a separate backpack just to carry all my tapes for a three month trip. These days I can carry enough music and audio plays to last a year on my phone. However, I miss the days of vinyl. I miss the way that an album not only had an internal narrative, but were structured in acts over two, four or more sides. I miss stacking albums and singles on to the central spindle and watching each disc slide down on to the turntable like a stripper sliding down a pole. That was as near to shuffle as we got in those days. Listening to one half of half a dozen albums, then flipping the lot over. These days vinyl seems almost steampunk. Yet there was something undoubtedly romantic it about it. You never hear anyone speak with the same sense of quixotic nostalgia about compact discs. 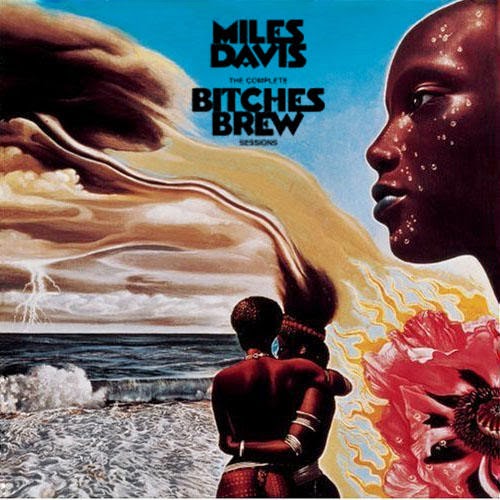 I don’t use Spotify and I don’t listen to music on shuffle, ever. If I listen to music then I’m in for the long haul, the whole album, start to finish. Especially if I’m reading then I like a consistent soundtrack. On more than one occasion I have listened to the entire five odd hours of Bitches Brew in a single mammoth reading session. Or twelve Dylan albums or the complete Clash or Radiohead discography in a row while writing. Perhaps it also has to do with my continually shifting mood. Music soothes the savage beast, but it also preserves him in a state of suspended animation when he’s in a productive mood.

Then again, I am a cultural fascist and so I also think that what separates me from the Spotify generation is that I listen to good music. If you’re listening to Justin Bieber or Lady Gaga then I can understand why you wouldn’t be able to stomach a whole album’s worth. It’s like eating a large bag of Haribo. Full of sugar and of no nutritional value.

The strength of western society has always been predicated on population control and whereas technology should be enhancing our lives, it is instead being used as a weapon to keep people fractured by decimating their attention spans, much in the same way that incessant, structured ad breaks have been used in the USA for years. TV in the US seems to be less a form of entertainment and more a device for psychological conditioning. Online subscription services are slowly eroding the advertising industry’s half century strangle hold on TV, but who knows how long that will last. One would imagine that as the balance shifts from broadcast to internet media the advertisers will arrive like Killer Whales beaching on the shore.

And now a word from our sponsors: Download ad blocking software to your internet browser of choice today.

Under these circumstances, one would hope that the ones who mentally fight these assaults upon the senses will have a distinct advantage over the rest. There is no doubt that people are getting more stupid, spend five minutes on an any comments section if you don’t believe me. I’m not someone who watches shit films for the sake of it or sits on Twitter complaining about The Apprentice or Question Time or whatever. Not only are we becoming more stupid, but we are forgoing intellectual advancement and artistic creation in favour of pissing over anything anyone one else creates.

You will rarely read here any article in which I slag off or pick on an artist, musician or film. There is plenty that I don’t like, but I tend to try and just ignore it. There are seven billion people on the world, you, me, everyone is bound to be unattracted to most of what goes on in the world. Yet the need for instant gratification and the celebrity culture that has infected society like a disease that causes severe brain damage means that it’s easier to attack the efforts of others. Instead of commenting on the latest bunch of unpleasant wankers on The Apprentice, you could be learning a new language or going to art classes. Instead of arguing on Twitter about Toby Young’s thoughts on the NHS on Question Time, you could be out helping your community or joining a local Amnesty International group. And here’s a question for you: Why do supposedly intelligent people watch Question Time? A program featuring a panel of politicians. It’s like you want to lied to.

I have all but stopped watching television. I don’t have a TV of my own and what little I watch is usually a BBC Four program of iPlayer or something created by Dan Harmon watched using a proxy server to make the internet think I’m in the US. And even then I have my ad blocker enabled to skip through the commercials. That’s anarchy in my book (humour).

Aside from that, I read, I listen to albums, I struggle to learn new languages, I memorise the Shipping Forecast areas and Rimbaud poems in the original French in order to keep my memory keen. I listen to what I want, watch what I want, read what I want and if there is no prospect of me enjoying something then I don’t do it. Everyone should be so lucky.